The past and the current week have been the most intense and dynamic compared to several past ones. New descending trend impulses have been forming and developing on the cryptocurrency market.

The market is still in the downtrend phase, but the “bottom” is still far away. However, a short-term stop or a pullback are already around the corner. 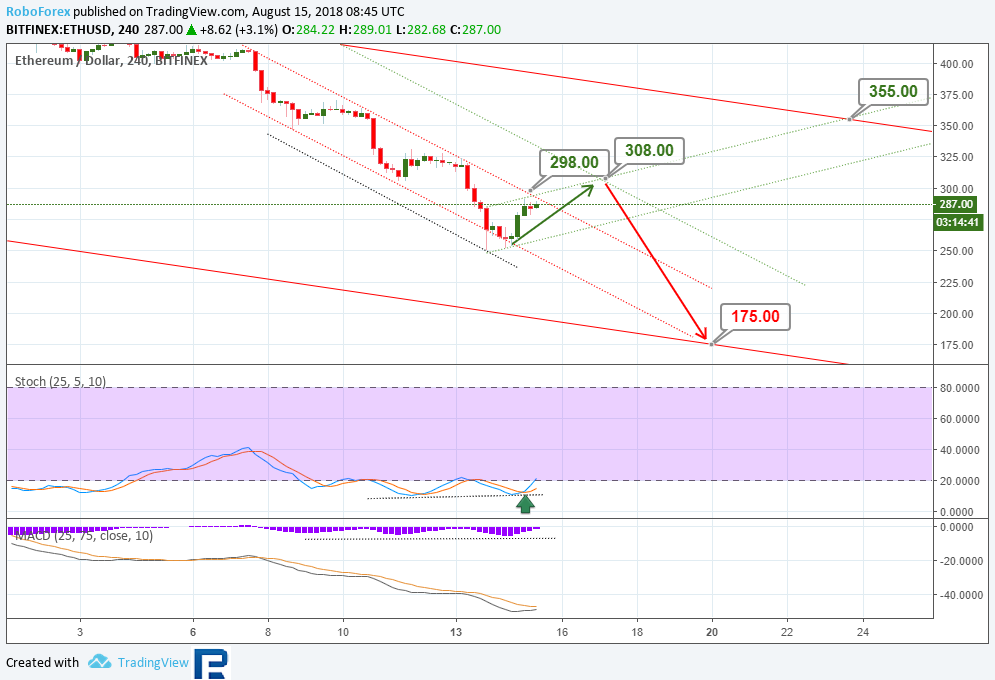 The situation with the dynamics of Ethereum is one of the most interesting, as the price of this cryptocurrency has managed to develop one of the fastest and stable descending microtrends.

On H4, one can see the direction of the short-term descending trend towards the support line of the long-term descending channel at 175, but this is probably still a perspective of several weeks.

On a short-term period, considering the forming of convergences on MACD and Stochastic, one can assume the beginning of the development of an ascending correction trend.

Only the level of 298 acts as a local resistance for the descending trend. Its breakout may open the way for the price to the resistance line of the upper projection channel, which is at the level of 308. 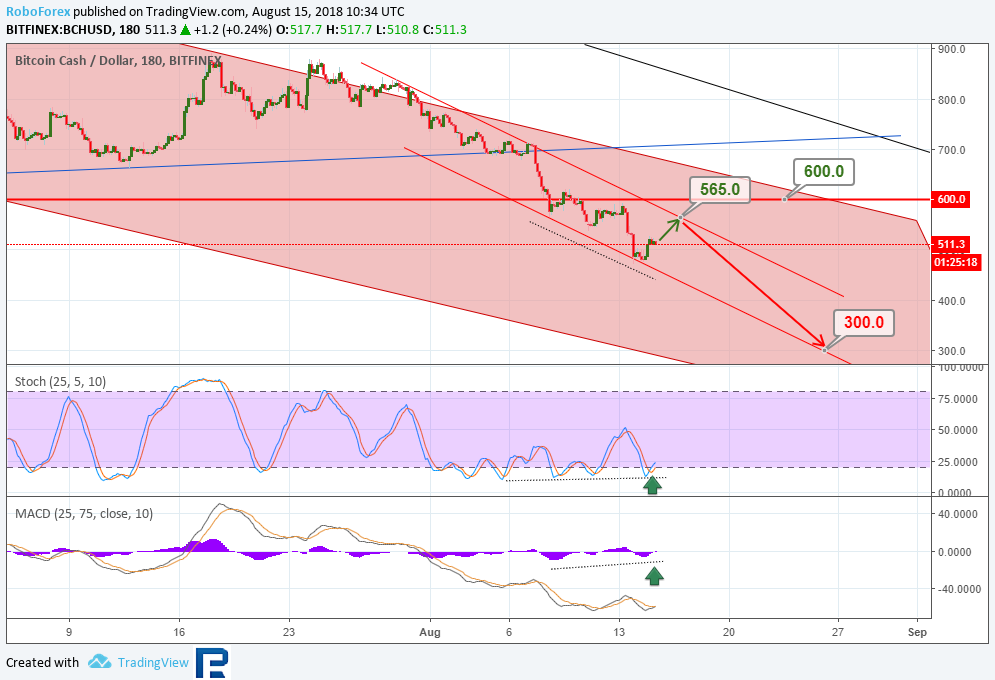 The long-term, medium-term and short-term tendencies of Bitcoin Cash price are still on the downmove.

The bounce off the resistance line and the break out of the fractal support level at 600, which is currently a strong resistance, have become the landmarks in the development of another descending impulse.

At the first glance, the short-term channel of the descending trend looks quite stable and can indicate the potential for descent towards the psychologically important level of 300.

If we look at the Stochastic and MACD charts, one can see convergence and Golden crosses. Those factors indicate the beginning of a short-term pullback.

Its closest target may be the resistance line of the current descending channel at 565 and, possibly, at 600. 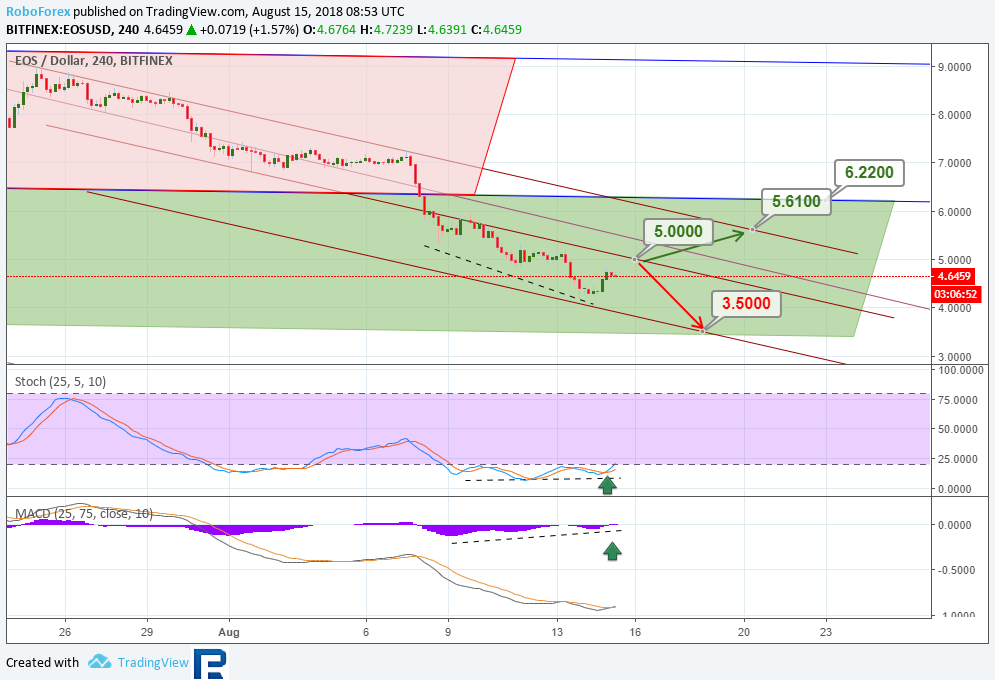 Last week, the technical picture for EOS demonstrated the beginning of a breakout of the support line at 6.22, which is currently the key resistance.

By now, we can see the acceleration of the development of a short-term downtrend after a breakout of the support line of the previous descending channel.

The main target of the medium-term downtrend is near the support level of the current projection channel at 3.50.

Taking into account the forming of the Golden crosses as well as of convergences on MACD and Stochastic, we can assume the possibility of growth towards the resistance line at 5.00. And towards 5.61 after its possible breakout. 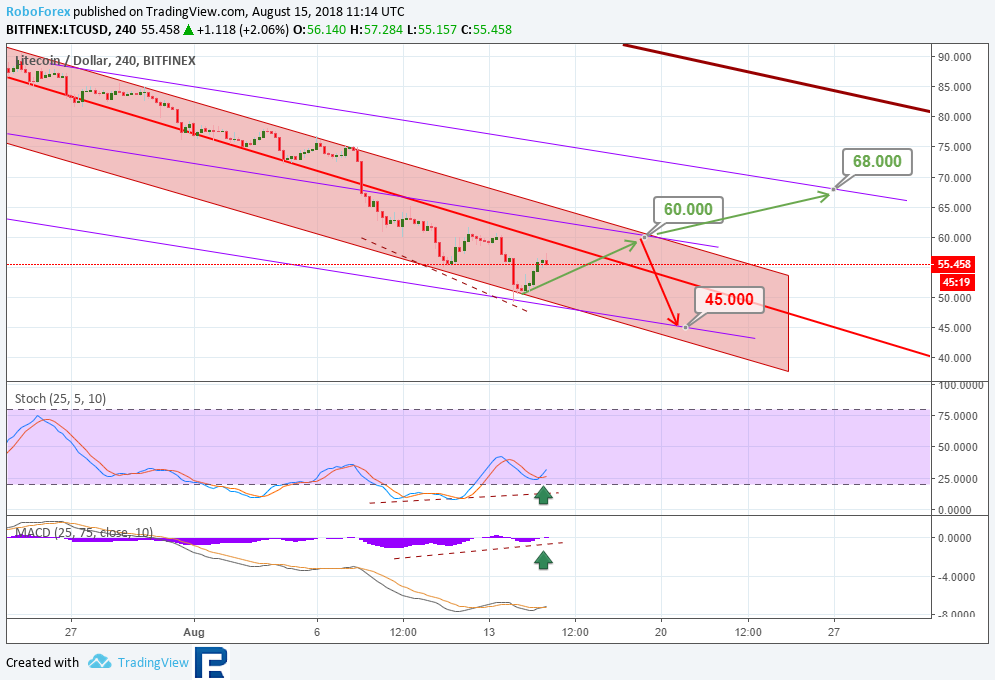 After having tested the resistance line of the short-term descending channel, the Litecoin price is back within the limits of the previous channel.

At the same time, the short-term technical picture for Litecoin demonstrates it approaching the support line of the current channel.

Alongside this, convergence and Golden crosses are forming on Stochastic and MACD, which jointly indicates the possibility of a pullback to the resistance line at 60. Its breakout may open the way to 68 for the price.

But in case of the bounce off the local support a new descent impulse towards the support line at 45 can be expected. 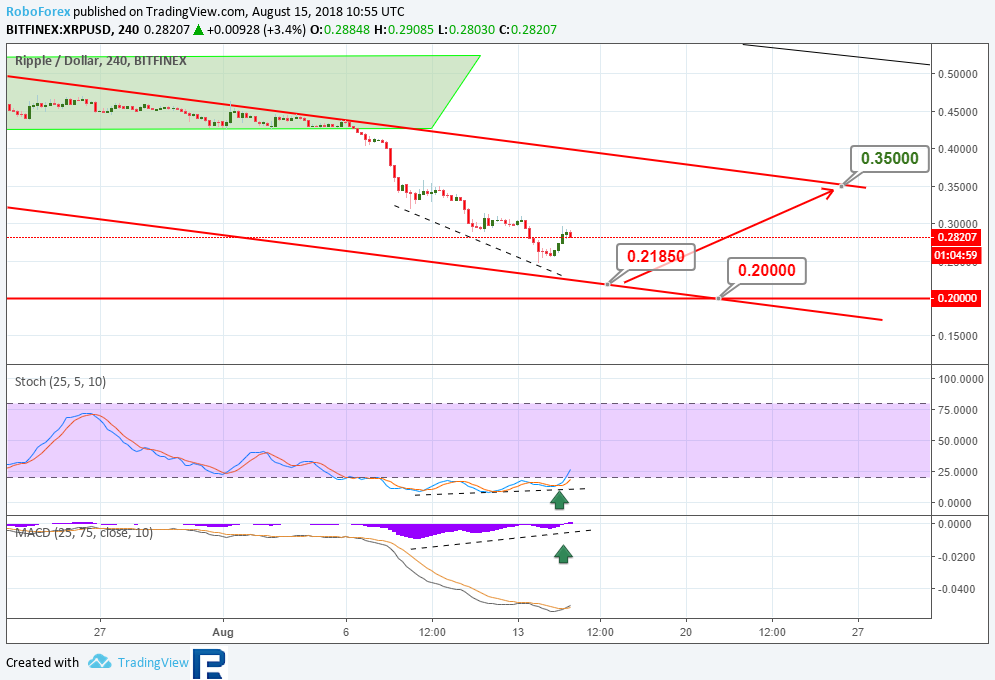 In terms of the technical analysis, the dynamics of Ripple is still on the downmove. Another impulse from the descending trend is approaching the support line of the medium-term channel at 0.2185.

We also need to pay attention to the fact that the market is approaching the psychologically important fractal level of 0.2000.

After the price reaches the support lines, taking into account the convergence on MACD and Stochastic, we can expect the development of an ascending correction trend towards the resistance of the current channel at 0.3500.