Bitcoin Shorts at All Time High, $250 Million Betting on Price Going Down 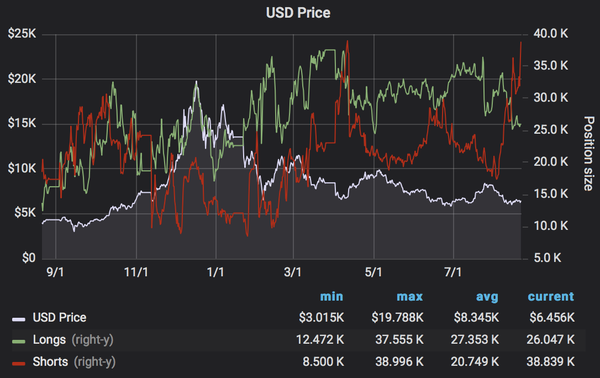 Bitcoin shorts have risen today to an all-time high of ₿39,000, worth some $250 million at current prices.

The last time shorts were at this level was in April, when bitcoin rose from the current price level of $6,500 to just under $10,000.

The current gap with longs being so much higher than shorts, however, has not been seen since September last year.

As can be seen on the left, longs have dominated for much of this year, especially during February when longs were at their highest share at nearly 80%.

For this month however shorts have risen to take 60% of the share, higher than in April when it was at around 55%.

In contrast, it is longs that are dominating in ethereum, with the gap between longs and shorts there at the highest level ever.

Suggesting some interesting dynamics as the market in bitcoin appears to be overall bearish, but the last time shorts reached this level, price turned to rise.

In ethereum, on the other hand, the market has turned bullish, and there too, the last time it reached the current long levels the market turned to rise.

Whether that will repeat is unclear, but what might be happening here is that with bitcoin shorts so high, some might be anticipating margin calls of shorts. That would mean the shorters who sold the btc on borrowed money, might have to buy it back and return it.

That could lead to a cascade of calls, with that upwards price pressure in bitcoin potentially dragging eth up.

That, at least, might be what the eth longers might be betting, although it could also be that they think eth’s price is too low at $280.