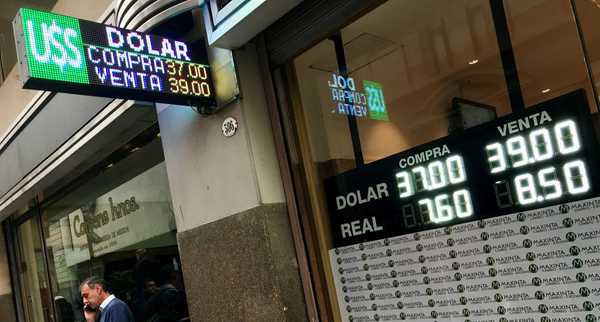 Argentinian money has collapsed, halved in value since May and down 33% against the dollar just in the past four days.

The central bank there has increased interest rates to an eye watering 60%, making borrowing an incredibly costly matter which may significantly affect the economy.

The measure was taken to slow down the free-fall of Argentine Peso (ARS) as well as to tackle the ever growing inflation rate which in July stood at 31% but now must have considerably increased as the value of pesos falls.

A dollar was worth 20 pesos this May, but can now buy nearly double that amount, reaching a high of 42 before settling at 38 at the time of writing.

The government there is now firing state workers, halving ministries, taxing exporters, while asking IMF for an early release of a $50 billion loan.

The already highly indebted nation, however, has traders worried whether they can actually pay back their debts with the country defaulting in 2001.

That is seemingly still hanging over the economy, with Argentina seemingly deciding to print its way out of at least some of the debt, maintaining an inflation rate of over 20% for now years.

It may also be that the strengthening dollar is placing pressure on emerging economies with a number of currency crisis on-going.

It appears something happened on the 19th of April 2018 that may have hinted at an emerging economies currency crisis that then followed, with Argentina potentially being the spark.

Bitcoin is at a slight premium in Argentina of about $200 with crypto related volumes across latin America increasing recently.

Curiously, Colombian (COP) money can buy a bitcoin at just $6,500 in this exchange which is the only one on Coinmarketcap to list Argentinian Peso.

That may be because Venezuelans might by proxy sell their bitcoins for the money of their neighbors Colombia, but with the Brazilian real also falling somewhat against the dollar during August, it may be the case that the whole of South America might be facing lower confidence levels in their national money.

That’s because with interest rates now rising while debt levels are astronomically high, the FED maestros might make a mistake, as they’re prone to do. That’s especially the case as US in particular is adding nearly a trillion dollars a year to its debt, rather than cutting down the deficit, let alone the debt levels themselves.