Crypto,Editorial,Ethereum,Litecoin,Trading There May Be More Down Says This Week’s Crypto Technical Analysis – Trustnodes

Over the last few weeks, the crypto market was uptrending, and while some thought it was going to continue others were expecting a reversal.

The latter turned out to be right, as today, on Sep 5, the crypto market went abruptly down. Still, the key lows are not broken out yet, and the correction phase may not yet have come to an end.

This was kind of shocking for some market players, but traders should understand such markets are full of surprises. In the nearest future, the prices are likely to start testing the lows, then break them out and continue falling down. 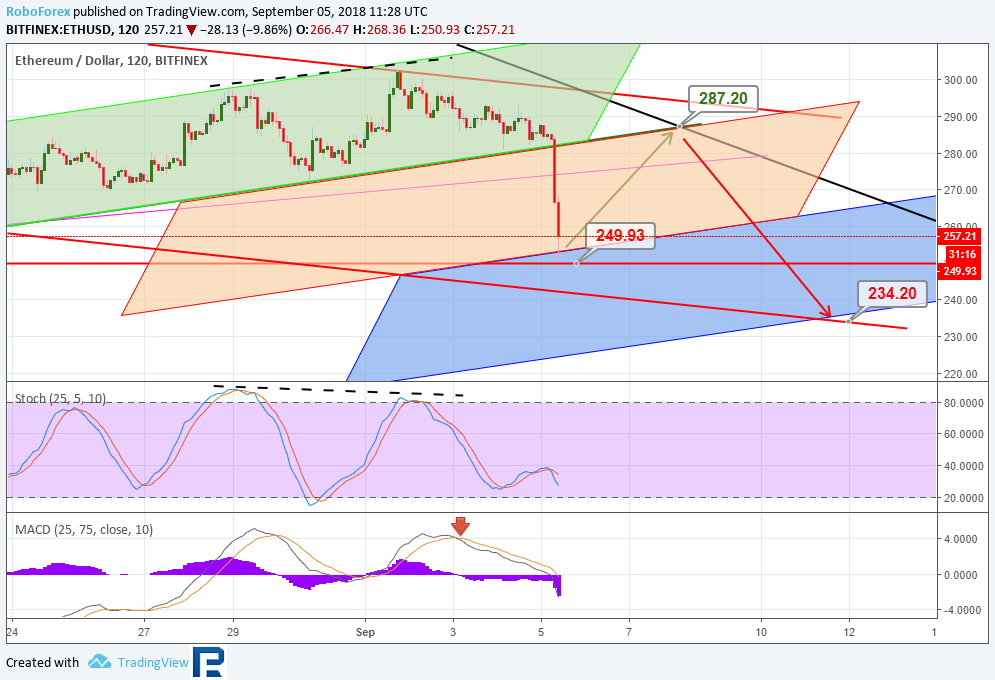 The MACD and Stochastic showed divergence in Ether a few days ago. Today, Ether broke the support of the latest short term ascending channel on H2 and tested the lower projection channel support, too.

It is targeting $249.93 now, which is the last key low. In the meantime, the price may bounce off to the major channel resistance at $287.20. Once the price reaches it and goes back, it is likely to start plunging to reach the support of the downtrend being formed, at $234.20.

Litecoin was uptrending for a few weeks, but the divergence and the black crosses shown by the MACD and Stochastic predicted that the uptrend was likely to come to an end.

Today, the market did react to those signals, with the price trying to break out the ascending channel support. Once it’s done, a new downtrend is going to begin, headed towards $52.50, and then to the key low at $49.14. 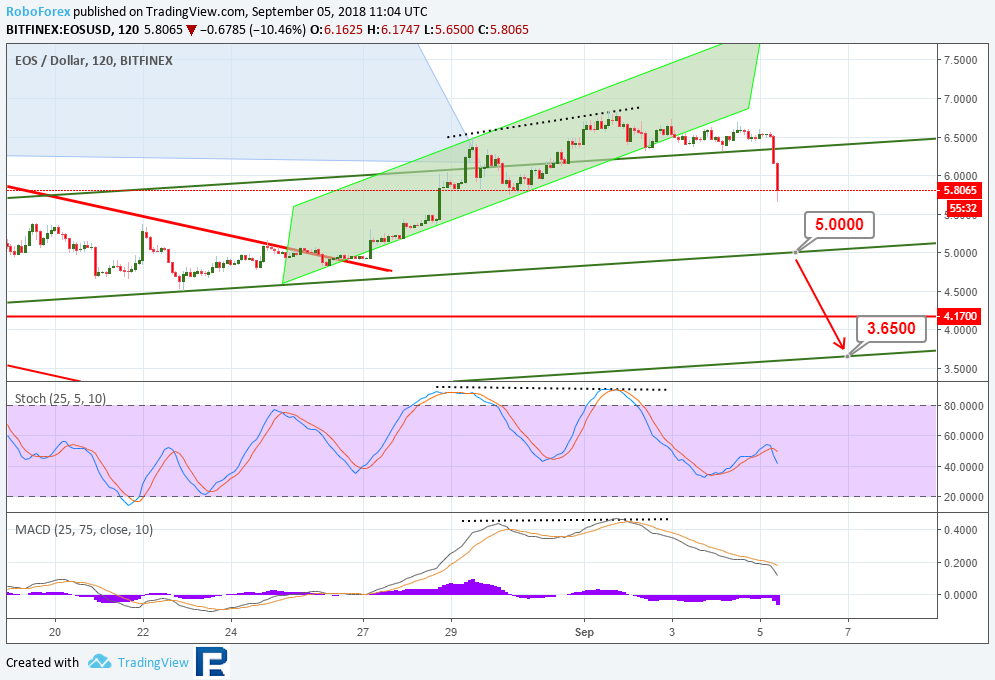 On H2, EOS was trying to remain above the correction channel resistance, but failed and moved down to the previous channel because of the short term bearish sentiment.

However, even before that happened, there had been some signals telling us the price might head down.

First, the Stochastic and MACD started diverging, then the short term ascending support got broken out, and, finally, the bearish sentiment came in.

Currently, the price is headed towards $5.00, and in case it gets broken out, EOS is likely to test its key low at $4.17, and then the projection channel support at 3.65. 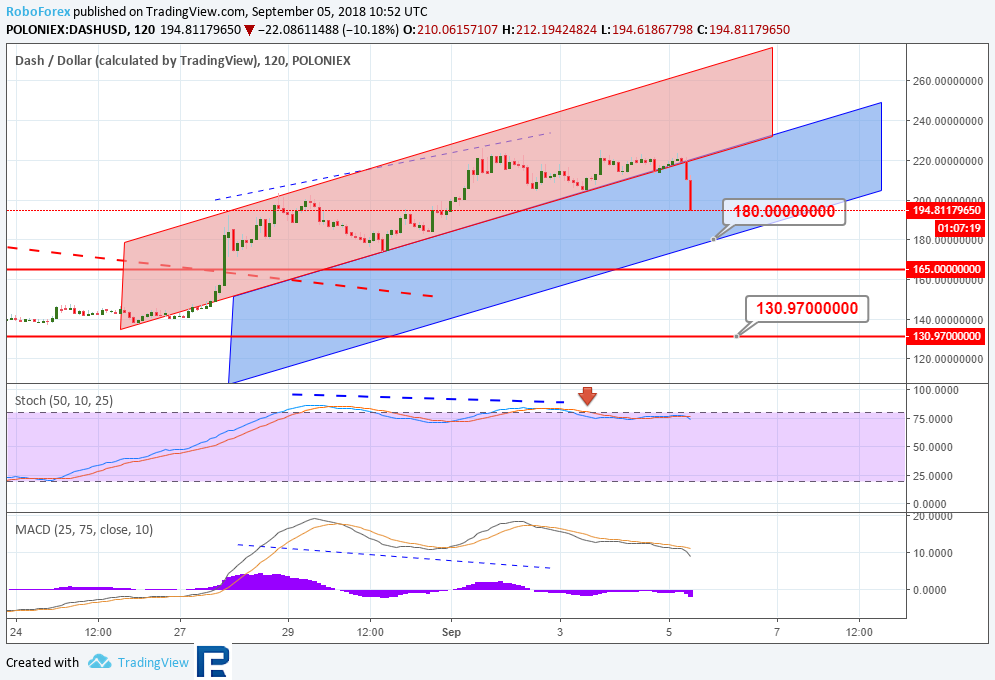 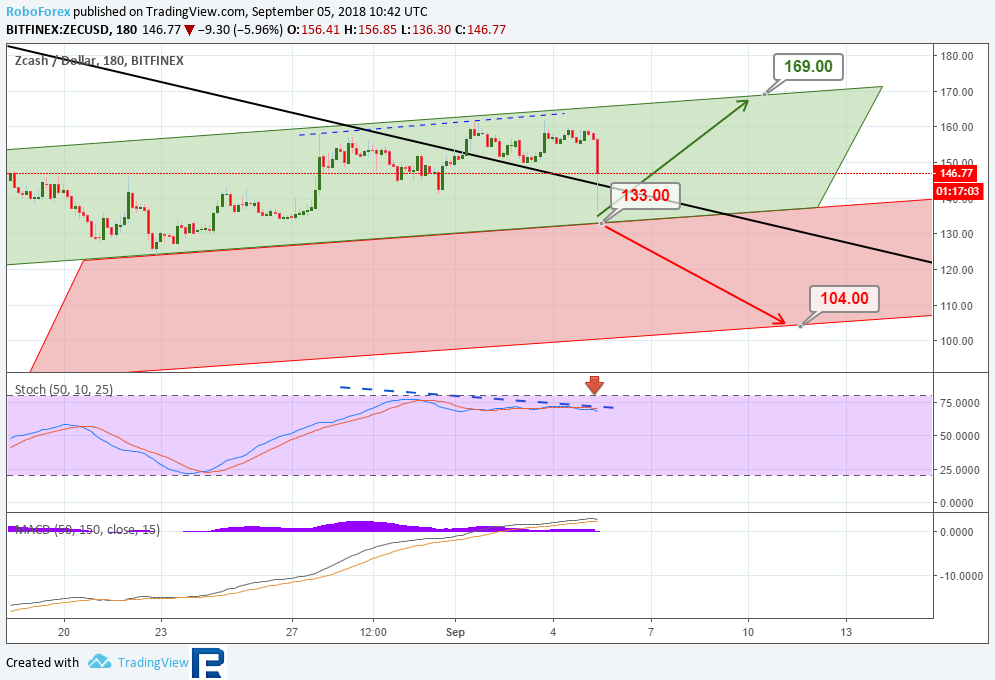 On H3, Zcash is heading down towards the current ascending channel support. This fall was well expected, but not at such quick pace, though.

The expectations came out of the resistance test, as well as the Stochastic divergence. The downtrend target is at $133.00, but as long as it’s not broken out, no one can assume the downtrend will continue.

Conversely, the price may bounce off and start heading towards the resistance at $169.00. If, nevertheless, $133.00 gets broken out, the price is likely to move to the lower projection channel and reach its support at 104.00, which is confirmed by the black cross formed by MACD.