Coders Judge Coders at the ETHBerlin Hackathon, the Many Winners Revealed 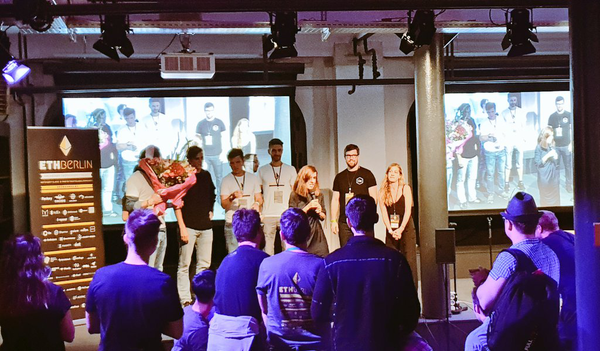 “I’m officially declaring ETHBerlin the weirdest/coolest/nerdiest blockchain event I’ve been to” says Manuel Araoz, CTO at Zeppelin Solutions that provides a number of Solidity coding libraries and templates which are virtually used by everyone.

Two days of hacking had, packed within 15 minutes of each other, plenty of etherean coders. Attack the ethereum network now, one of them said in jest, we’ll mobilize in seconds.

Silly fun and memes that needed much brushing up were mixed with more coding in 48 hours than many can write in a month.

First up, a project that wants our job. For it, OpenTimes says little more than they’re “an autonomous and peer reviewed journal built upon the Colony platform.” They do have a github, and they received a prize from Colony.

Artonomous has a lot more to say about itself, perhaps even too much, but the idea here seems to be some sort of collaboration between bots and humans in the endeavor of art creation. They say:

“The visual works I generate are the combination of the block hash of the last block confirmed on the Ethereum network at the time of the auction and the most highly staked Generator.

These elements are included in ART tokens. ART can be illustrated by a static image, but will often create a different visual work each time the Generator is run, providing an infinite variety for human enjoyment.

Please note: Humans cannot enjoy an infinite variety. Human enjoyment is limited to the period of the human’s lifespan.”

That’s assuming the “human” is a specific unit rather than a combination of its units. If the latter, one can imagine they could enjoy infinite variety due to a technically infinite lifespan based on how much leeway those combination units have in providing roughly the same whole on slightly different combinations, but enough with the weed Musk, lets go to Ethstonian Identity.

Now these guys have some attitude, saying “Vitalik’s trick to use EIP198 for multiplication is much slower than our chinese remainder based one.”

And if that’s not enough, they wiggle their finger at the Estonian government as: “They switched from RSA2048 to Secp384r1 and did not update their documentation!”

An exclamation mark! Yet after “reverse engineer[ing] the Estonian e-Identity signature mechanism” and “implement[ing] the Secp384r1 elliptic curve in Solidity,” among other things, maybe they’re entitled to be a bit stern.

They have designed “a wallet contract that is controlled by your Estonia issued Identity card and tied to your citizen number.” Apparently all of that in the 48 hours period.

There were a number of technical projects that won some sort of prize, including Smart Alert, a monitoring tool for smart contracts and Sputnik which designed a byte code assembly type language for more private contracts.

Then there’s the Gorli Testnet, which “designed the FIRST Proof of authority testnet that can work with any client.”

Then there’s game of SNARKs. No wonder the guy above needed some rum because this one says on its description page:

“During the ETHBerlin we’ve tried to make a good demonstration of the power of zkSNARKs by implementing a ‘Battleships’ game where an interaction between the players is governed by the SNARKs.

During the development we understood that it’s actually is quite abstract two-party state-channel with some kind of a smart-contract inside.

Keeping the state updates is expensive in the mainnet, so such interaction can be moved to Plasma, where the operator verifies SNARKs upon transaction submissions and updates a ‘state.’

Many people forget that Plasma was introduced not only as L2 solution for payments, but also as kind of map-reduce system.”

There were a number of clients, including an ENS wallet, with an interesting project being CPD Liquidator. That’s a smart contract that closes your Dai position before you get called, or at least tries to do so.

The technical aspects are perhaps a bit too much for these pages, but it is the latest example of how Dai is becoming very much a platform itself, with its monetary elements incentivizing many to add efficiencies and refine some of its aspects.

It is in a way like ethereum itself, and that applies to all dapps that get it right. Just as people want to build dapps on eth to the point hackers hack hackers, so too people want to build dapps for dapps because they can, as it is all open and permissionless, and because obviously there are monetary incentives as Dai out of thin air can be pretty yummy, just as getting your eth wiped out can be pretty punchy.

We could of course go on as there were 63 submissions and 2 rounds of pitches, but what was eventually becomes, with only the mess so left behind to tell all, at least for some time, that the hackers were here, and they have now gone to the next ETHGlobal.

That next event will now most likely be Devcon in Prague at the end of next month where the ecosystem is put on display.

An entire year what has been achieved, next year what is the aim, that’s where we find out, making it a very different affair to the hackathon where much is hands on.

Yet the make or break Devcon4 may influence just how much more memes the next hackathons have, or how much more energy the haxors bring, for now there’s only just about a year left until 2020.