Overall, the crypto market is consolidating before a strong move. The market is waiting for an event or news that could be a driver.

For some coins, this may mean an abrupt reversal, while for others, it could be just a speedup in the midterm. Meanwhile, the opinions on how the crypto market is going to move next, differ. 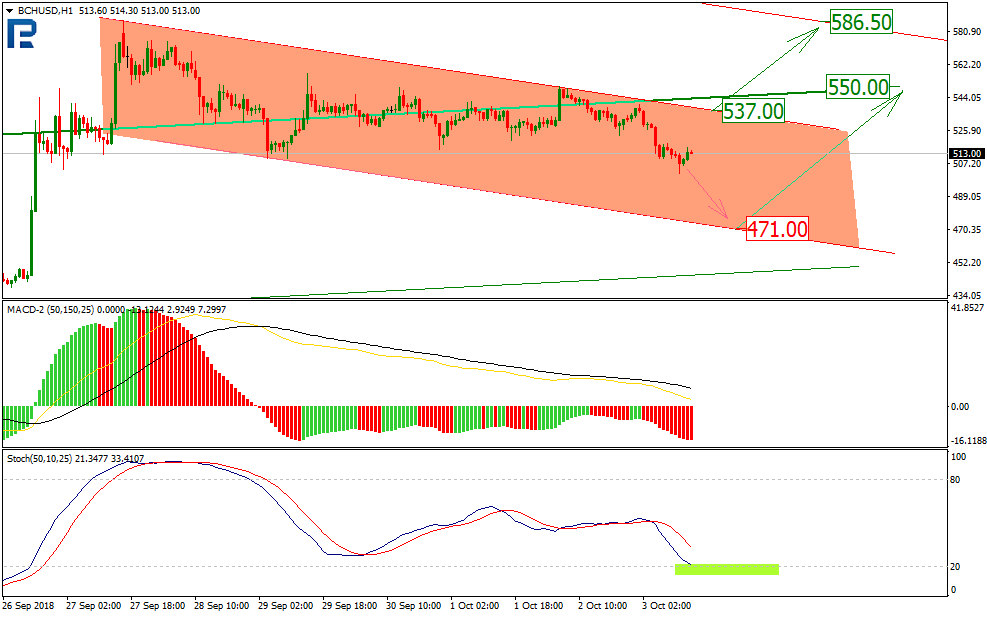 On H1, BCH is downtrending; this downtrend, however, is none other than correction after the previous rise. The current target is at the channel support, i.e. $471, which could be confirmed by both the MACD and the Stochastic lines falling.

When the support is reached, a pullback and rise to $550 is possible, especially if confirmed by a black cross in the Stochastic oversold territory. The local resistance is at $537, and, in case it’s broken out, the price may rise to $586.50. 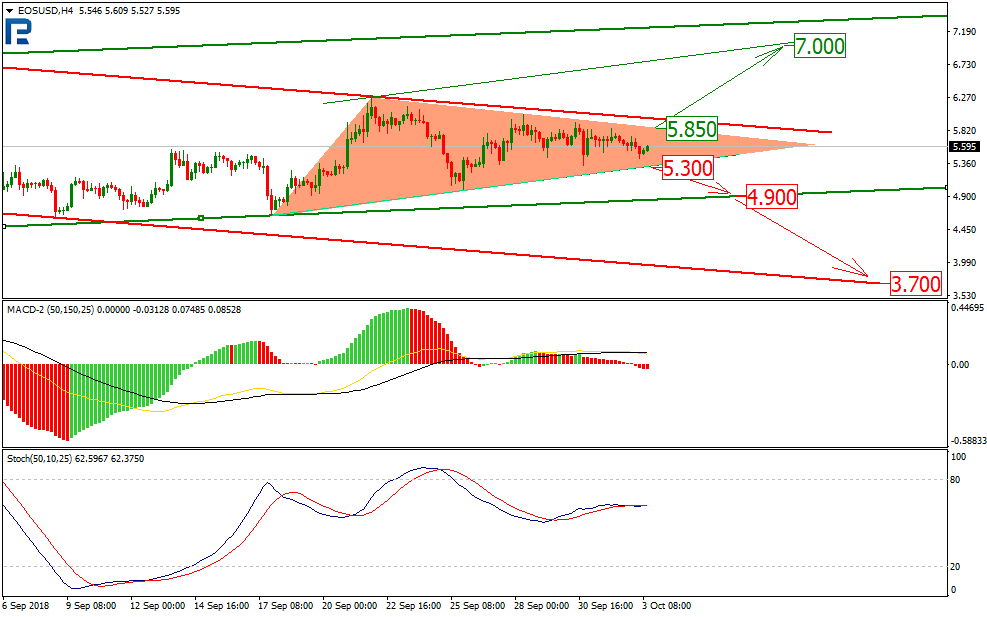 On H4, EOS is forming a consolidation triangle pattern. The local support is at $5.30, while the resistance is at $5.85.

In the midterm, the price is inside an ascending channel while making lower highs. The local support may thus get broken out, with the price going further to the major channel support at $4.90.

This, in its turn, may lead to another descending move to another support at $3.70, which could be confirmed by the black crosses formed by the Stochastic and MACD. Conversely, if the resistance at $5.85 gets broken out, the price may further rise to $7.00. 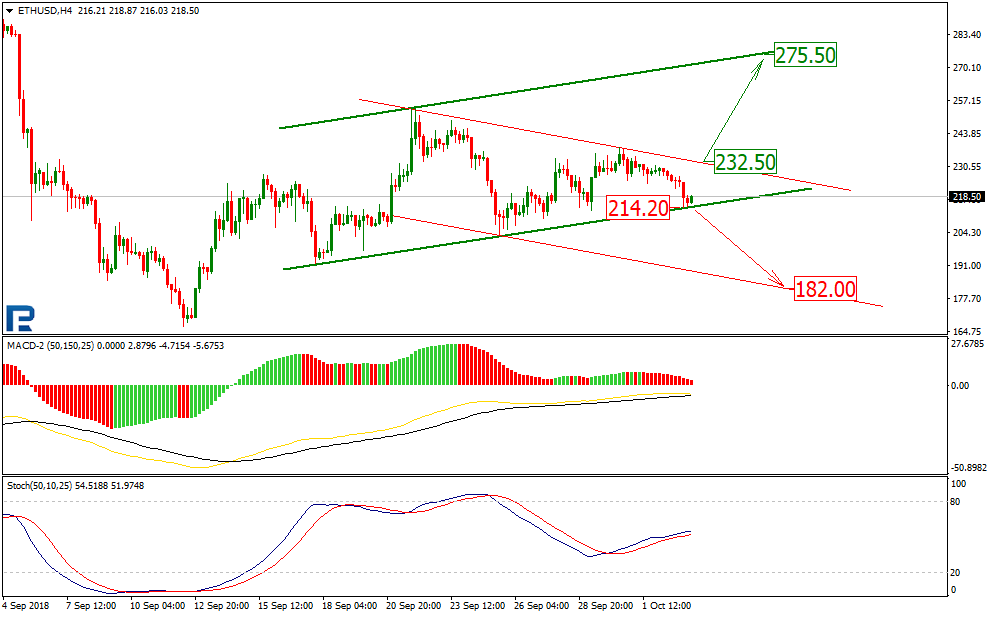 Ether is currently testing the midterm ascending channel. Overall, it is consolidating before a large move. In case the resistance at $232.50 is broken out, the price may move as high as $275.50.

Conversely, if the support at $214.20 is reached, a downtrend towards $182 and then to the major low may follow. The MACD and the Stochastic are meanwhile rising, which means the uptrend scenario is more likely. 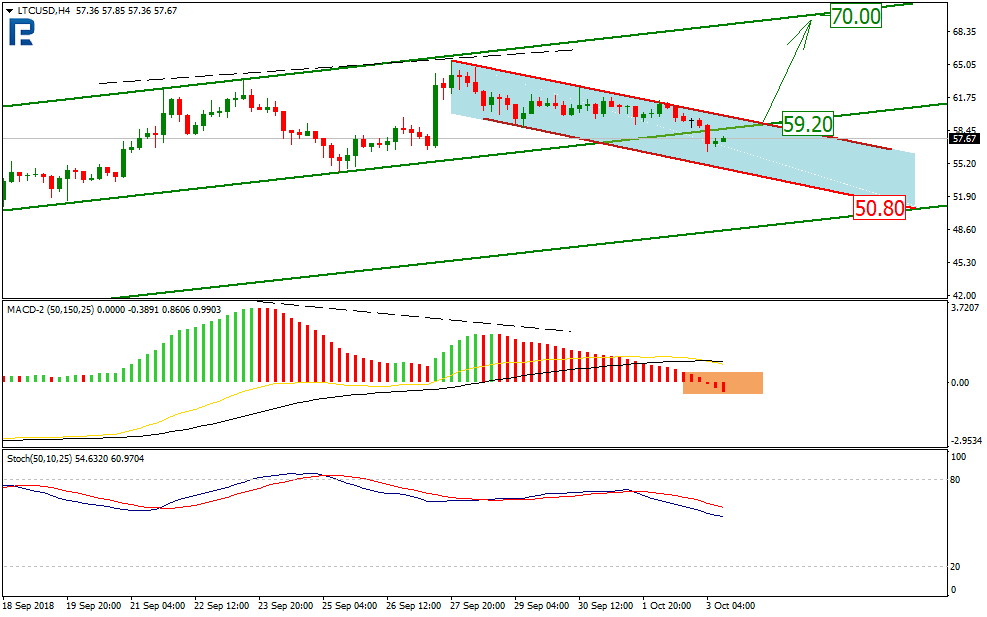 On H4, Litecoin is trying to break out the midterm ascending channel support. The downtrend target may lie at the projection channel support at $50.80.

This is confirmed by the MACD and the Stochastic diverging and forming a black cross. Conversely, if the price manages to rise, it may reach the resistance at $70.

Ripple broke out the previous descending channel resistance and now moved to the upper projection channel. However, after testing and breaking out the ascending channel support, the price entered a correction downtrend.

The correction reached the lower projection channel support and is now trying to rise again to the current resistance at $0.5607. If this one gets broken out, Ripple may go further up to $0.6405, and then to $0.6895.

The key support and the major downtrend target is at $0.4730. However, the Stochastic is moving towards the oversold territory, which means a rise is a more likely story here.