The Massive Meme Triangle is About to Break 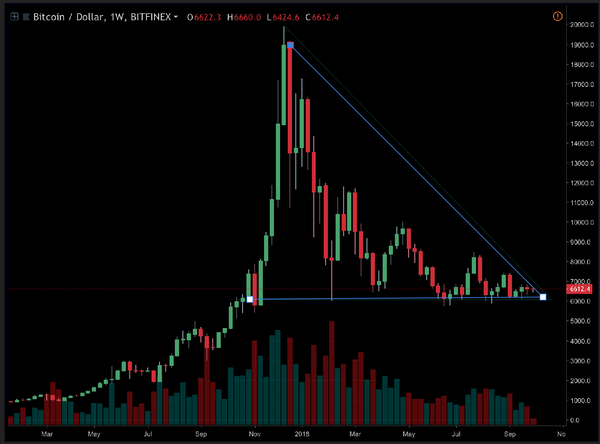 After ten months of bear action, bitcoin and most other cryptos may be facing judgment day when the market will decide whether bulls are back in town or bears will ravage everyone.

The triangle formation seen above, with lower highs but a stable low of about $6,000, has been going on for months and now its time may be up.

The textbook says this pattern is a descending triangle. Something which can be bearish as it means a continuation of the bear market, or it can be bullish as it may mean the beginning of a bull run.

The only option they’ve taken out, therefore, is sideways movement, but not quite because they say it will sideway until it decides to go bull or bear.

So with this textbook thrown to the garbage, we’re now free to utilize a bit of common sense to see what the meme might be saying.

As this pattern has been formed over months, the chances that some whale drew it – like they do all the time in 15 minute candles – stand at close to zero.

Instead, we clearly have had 10 months of more sellers than buyers. Such buyers were fairly strong in February and March. Then they get weaker and weaker, but tend to suddenly show up when price nears $6,000.

Volumes here have clearly been falling since December because the sellers got out of the market while the buyers are now so beaten by the bears, they scared to try again. Except at $6,000 where green candles, with higher volumes than near red candles, appear now and then.

The case for bear here is that this is a continuation pattern, so bulls will capitulate in a dance of despair. An argument that might have been persuasive anytime prior to late September.

Now, bears will have to beat not only bitcoin bulls, but also ethereans, and there the story is very different:

This is a more simple chart to read in part because Wall Street is not messing with it. We have here la people acting as a herd in a straight down fall to the pit of despair in early September when un-ironically suicide lines were put up because the atmosphere was just the worst ever seen in the crypto space since 2011 when bitcoin was written off as unworkable.

The story, however, has a very happy ending because a massive army of bulls showed up in late September to send buying trading volumes above even December-January levels.

In fact, trading volumes for eth rose so high only March 2017 surpasses them. A March that was the opening of the then spring bull run.

Arguably, trading volumes in September were even higher than March if we take the two weeks in combination. Meaning they reached unseen levels.

Whatever bitcoiners decide therefore, it may well be the case ethereans have turned a page. Ripple’s recent bull run adds to that picture. The random 30% spike in BCH does too.

Is this thus the end for bears? In eth, probably. Within weeks now they will have a halvening of sorts where issuance is reduced by some 33%. That will take off the market some considerable sell pressure from industrial miners.

The bear market, however, has been brutal. So to get to a vertical line may take some time, but a gradual and continuous upwards direction may be on the cards, as may be a jump to $300, and then slow slow to $400.

Of course, one can’t discount it turning downwards again, but eth now feels cheap and bears probably don’t think it would be smart to face the late September bull army again.

This Christmas, therefore, may be the opposite of last Christmas when everyone sold to buy presents because now they might think the best present is eth or bitcoin.

Eth, moreover, now has plenty to look forward to in the near future. The price action has probably made devs work ten times as hard. Casper coding has begun. The better dapps will launch. The months of work will bear results.

In addition, bitcoin’s pioneering of institutional infrastructure will clear the path for eth and make it easy peasy. The months of building there, this time by traditional institutions like national stock markets which have announced one after the other they will launch crypto related products, will also bear results if common sense is any service.

All of which may mean that although a crazy vertical bull run is unlikely any time soon, the market might start turning upwards to slowly build momentum towards the finale, with the cycle then repeating.

Naturally we have to say the opposite of anything we said may happen, but it may also be the case that the two-three years long dance between bitcoin and eth will perhaps continue.

That’s because this bitcoin pattern of a floor at $6,000 may well be due to eth. One can argue therefore that bitcoin has been bearish and has been dragging the market down, while eth has been bullish, fighting to go up.

That tension between the two may have come to a head in late September when eth bulls showed up in overwhelming numbers.

That show of force may now mean a potential decoupling as eth potentially finally takes the batoon it gave to bitcoin in spring 2017 to lead the market.

Yet how the concerto will unfold remains to be seen as the play reaches the stage of suspense with all wondering what next.