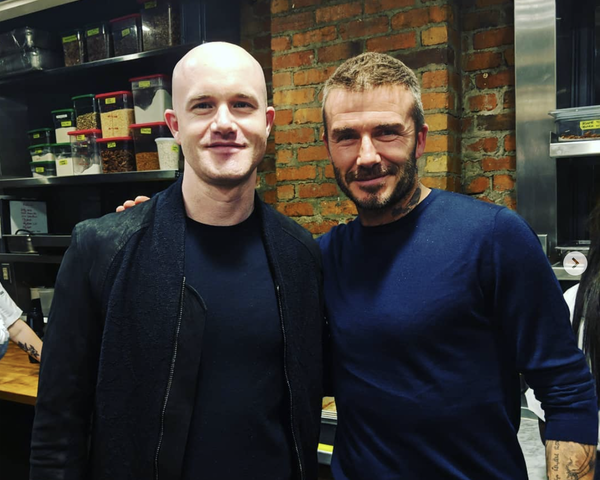 Why they really met is unclear, with Beckham further meeting in their own premises Mark Zuckerberg of Facebook, Adam Mosseri of Instagram, individuals from Apple, and presumably others.

There appears to be no mention anywhere of Beckham meeting with all these techies, so we could not establish the reason for this tour of Silicon Valley.

One potential reason may be charity. Beckham runs a UNICEF fund that helps “children unlock their incredible potential.”

Coinbase recently launched GiveCrypto, with Armstrong stating at the time: “We will raise funds from cryptocurrency holders, and distribute small payments to people in need around the world — all using cryptocurrency.”

So the meeting perhaps was a fundraising of sorts, with Armstrong stating they talked about crypto and tech in Silicon Valley.

Beckham was introduced to cryptos in or around February of this year in an episode of TSN where the presenter jokingly offers a partnership for a presumably fake bendit crypto token.

Maybe he is thinking of launching a Beckham coin, but that does sound far fetched, with the reason probably being charity related.

Now, however, Beckham is clearly familiar with cryptos. Whether Armstrong sold him on some eth, we do not know, but this space is now very much entering cultural mainstream.

All is left now is for Trump to tweet something about bitcoin, ethereum, crypto or blockchain, and if he crashes the testnet again in the process, we’ll forgive him.

Then, just the queen would be left to utter the words, but the chances there are unfortunately close to zero.

The future king, however, Prince William, probably will at some point. He is a millennial of sorts, so maybe he even has some bitcoins. Although he does look like an eth type, but Harry defo must have crypto.

Can’t be cool no more without crypto you know and Beckham is the embodiment of cool.