Gavin Wood of Parity has demonstrated Substrate, a new framework that aims to make launching a blockchain just as easy as launching a smart contract.

It is “the biggest bet in the ecosystem against chain maximalism,” he said, with substrate being a general framework that kind of templates all the cryptographic parts and all the many aspects of launching a new blockchain.

It is mainly aimed at allowing developers to quickly launch parachains on Polkadot, but Substrate can be used to launch a stand-alone blockchain.

“Polkadot is a protocol, like Ethernet. Substrate on the other hand is the software stack. See the Venn diagram,” Wood said.

With the idea here being to have application specific chains rather than everything running on one blockchain. Wood said:

“The difference between competition and cooperation is technology. We’re not designing Polkadot to compete with other chains. We’re designing it with the max degree of freedom and generality. It’s extensible, agnostic and you can put whatever you want on it.”

“Smart contracts will stick around as a way of quickly prototyping ideas but when you need to optimize or scale it, you’ll roll out a parachain. Eventually we’ll have middleware that makes rolling a parachain as easy as rolling a smart contract,” Wood said before then demoing the launch of a new blockchain.

After a few minutes of coding while showing off Substrate’s new suite of tools, Wood demonstrated how easy it can be for a developer to launch a new blockchain. 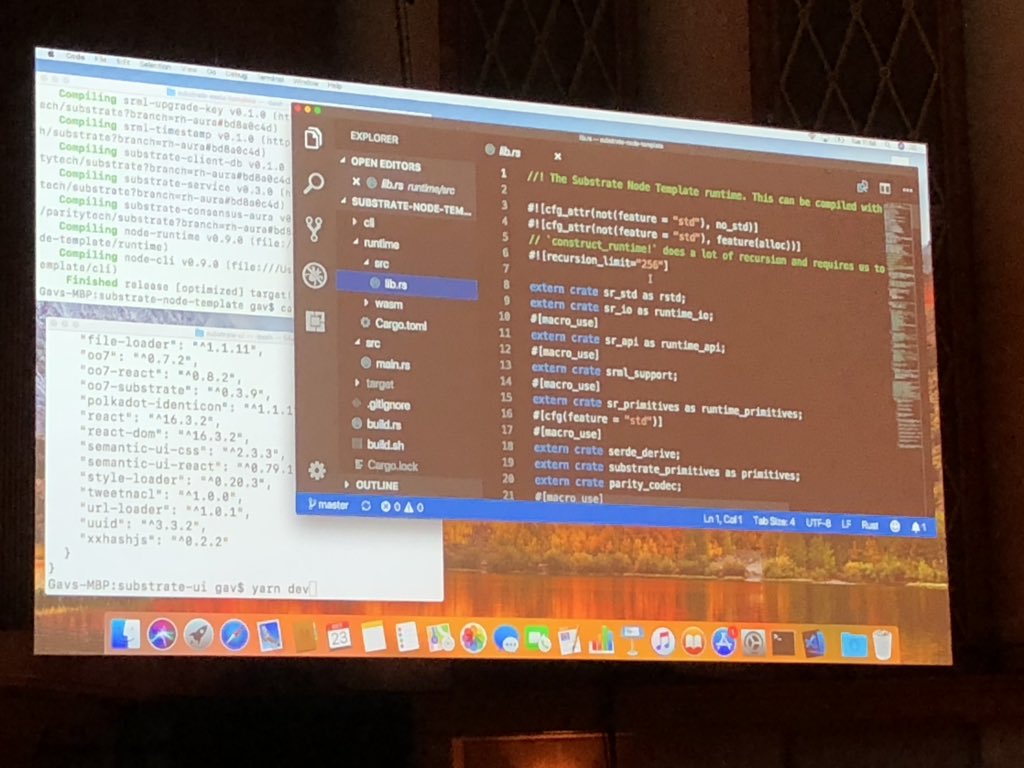 Substrate’s testnet was recently launched, with this now expected to go out in November. So bringing closer the launch of Polkadot, a new blockchain of sorts that takes a different approach to scalability.

In a succinct description, Jackson Palmer says Polkadot is a way of interconnecting many subchains or parachains through a main-chain of sorts.

Each parachain, in a very high level and simplified manner, needs to plug into Polkadot’s overall security and consensus engine, according to Palmer, who says “each parachain has to give up its sovereignty in terms of consensus and tap into the overall Polkadot network.”

With this thus perhaps more easily seen as sidechains whereby you can launch your own blockchain with its own consensus model while it kind of revolves around a main chain.

Polkadot had an ICO in 2017 for the Dot token which may have a role in the governance of the overall Polkadot network.

Making this effectively a new blockchain with a different approach to ethereum which aims to shard the nodes while keeping the same blockchain rather than kind of chopping up the blockchain itself into different neighborhoods with their own approach to things.

Both have their own advantages and disadvantages. Flexibility might be one advantage for Polkadot, while in ethereum communicating between different smart contracts might be easier as they all running on the same base layer.

“All of the lessons we learned developing Ethereum and Polkadot have been distilled down into a single stack of tooling that allows you to get all these advantages, in terms of time, cost and money,” Wood said, raising the question of whether ethereum may now be facing some strong competition as the Parity team gears up to launch their own blockchain.

Projects are already being launched for it, with Edgeware announced at the Web3 Summit. That’s a smart contract chain built on Substrate. With the project aiming to build an active governance protocol that sounds a bit like a DAO.

Some 90% of the tokens will be given away to individuals who lock-up ETH, with developers getting a new toy to play now as this space keeps expanding.