The crypto market is still being influenced by short volatility spikes, which means the consolidation range may only expand.

Currently the market is consolidating heavily. Local consolidation may stumble upon the midterm range boundaries, while only key support or resistance level breakout will show the real market sentiment. 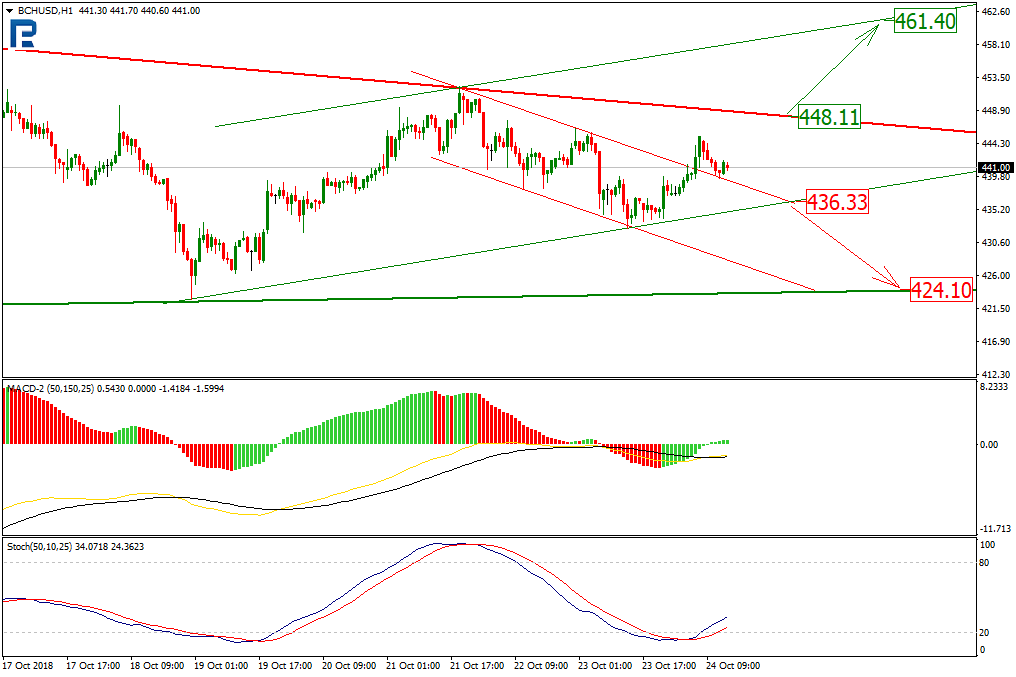 BCH is continuing to consolidate on H1. In the short term, the crypto is finishing its descending trend with a resistance breakout.

The new ascending target may be at $448.11. This is confirmed by the golden crosses formed by the MACD and Stochastic.

The current support breakout may then let the price reach the resistance of the ascending channel being formed, at $461.40.

A fall, however, is also possible; the support is currently at $436.33, and in case it gets broken out, the price may head to another support, this time the midterm one, at $424.10. 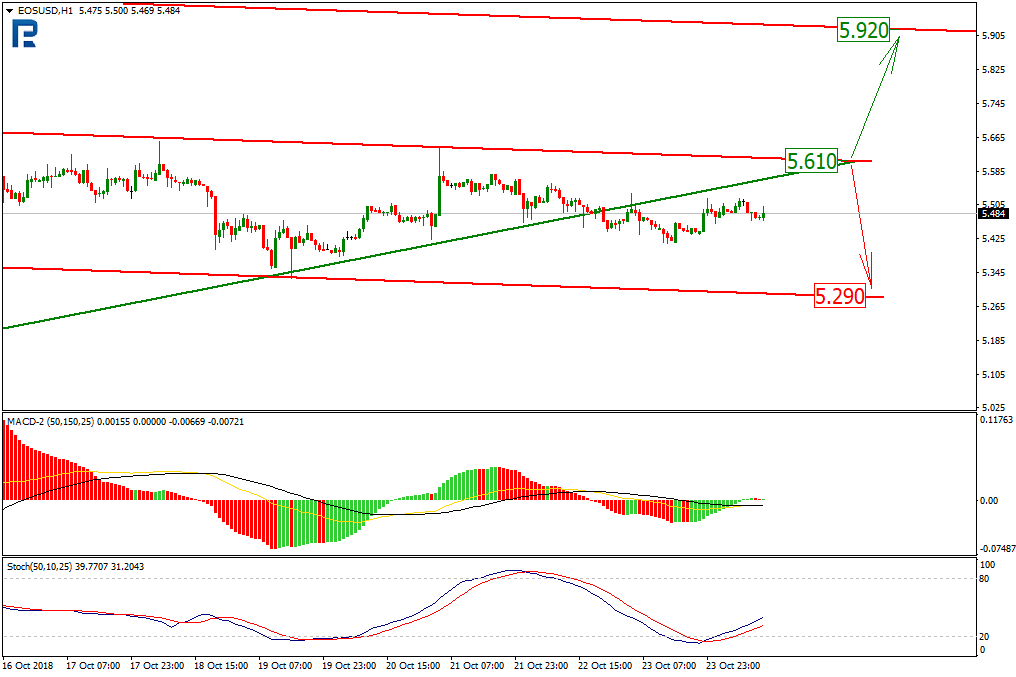 Technically, EOS is continuing its downtrend on H1; however, the momentum is so weak that this descending trend may actually be called a range.

Meanwhile, the price broke out the midterm correctional trend support, and is now trying to stay above it. This may even lead to the resistance test, which is confirmed both by the Stochastic and the MACD lines.

The target will be in this case the resistance at $5.61. However, as the price is moving within a range, it will most likely bounce off that resistance then and go back again to the support at $5.29.

Nevertheless, the price may exit the range and go up as well, to reach $5.92. As the market is still restless in the short term, short volatility spikes are possible. 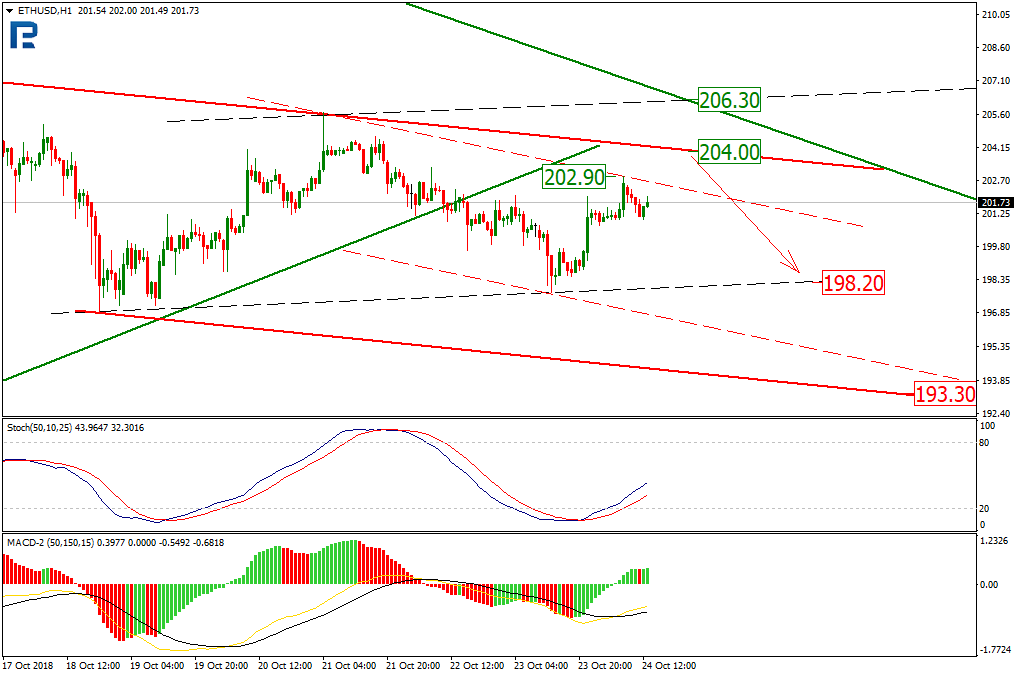 On H1, Eth has formed a downtrend after hitting the consolidation channel support, but failed to reach the local lows. This may be the end of the current descending trend.

The price is meanwhile making higher highs, which means there’s an uptrend forming; this is also confirmed by the MACD and the Stochastic.

If the price manages to break out the local resistance at $202.90, this will mean the uptrend is really here. 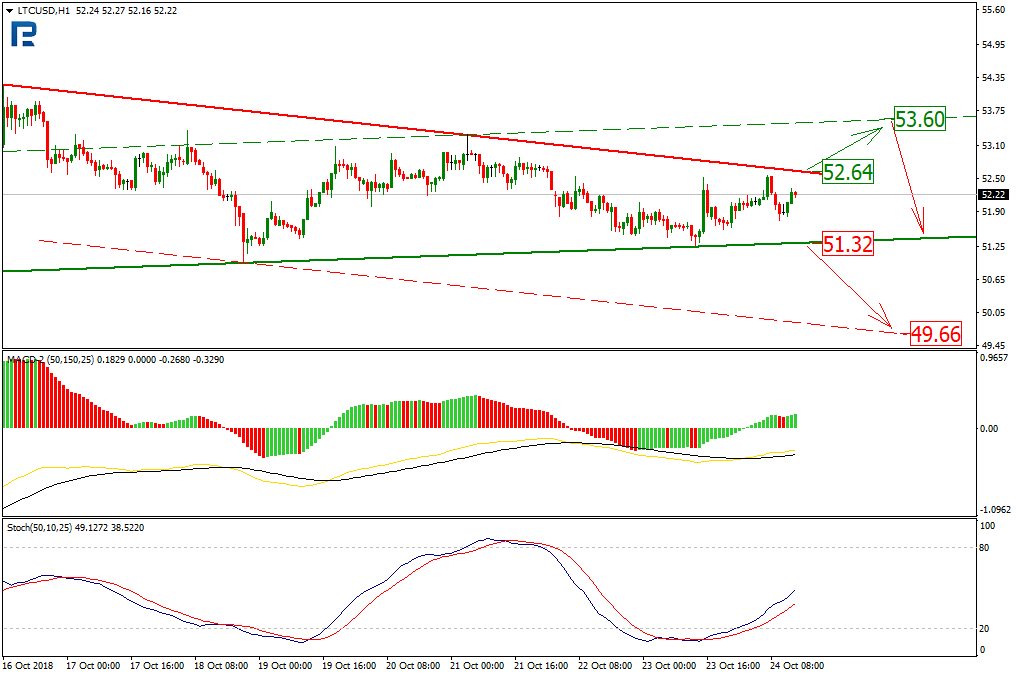 LTC is making its channel tighter on H1. Then, it may go both up or down, as both options are equally probable. Currently, the resistance is at $52.64, and in case it gets broken out, the price may reach $53.60.

Both MACD and Stochastic show an upmove is probable, but still the current support at $51.32 may get broken out as well. If this is the case, the price may head lower to reach the potential descending channel support at $49.66. 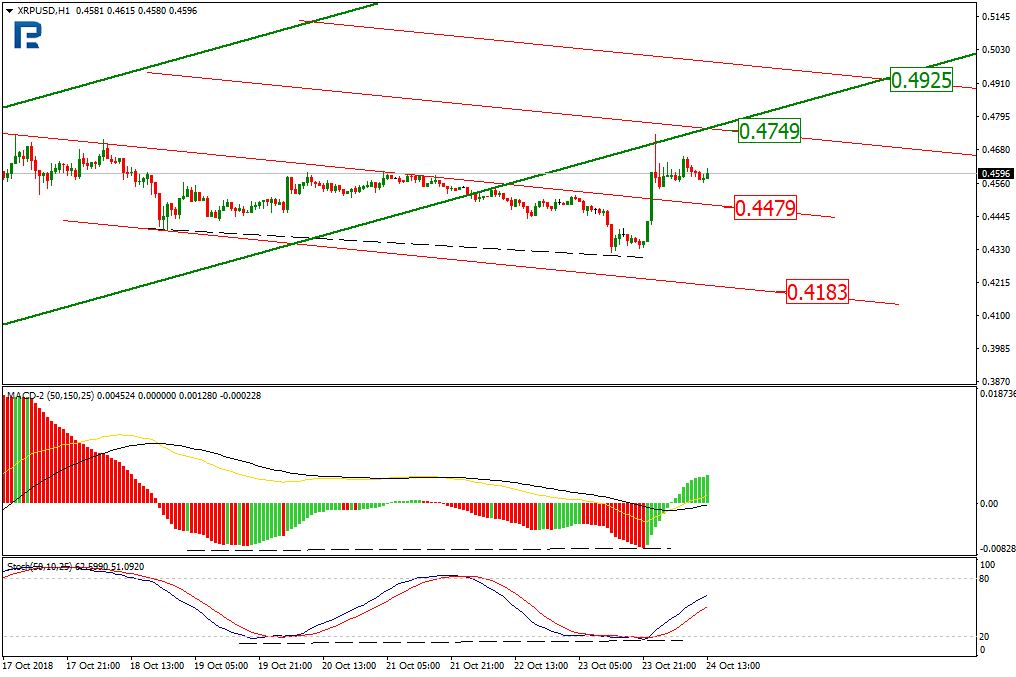 On H1, Ripple is breaking out the midterm ascending channel support, which may be a beginning of a new midterm downtrend.

The short term descending trend faded out when the Stochastic and the MACD lines converged, while the channel resistance got broken out.

The current upmove is headed towards the upper projection channel and the broken out support at $0.4749. After breaking it out, Ripple may continue rising to reach $0.4925.

The support is meanwhile located at $0.4479; in case it gets broken out, the price will continue moving down, with the closest target at $0.4183.