Last week, cryptos were consolidating, but this week, they are exiting this range and heading down. Thus, the bearish sentiment is still prevailing in the market.

Currently, in the short term, the price is correcting against the latest downward movement. All descending moves are in line with the major trend, but the correction phases prevent it from getting stronger. 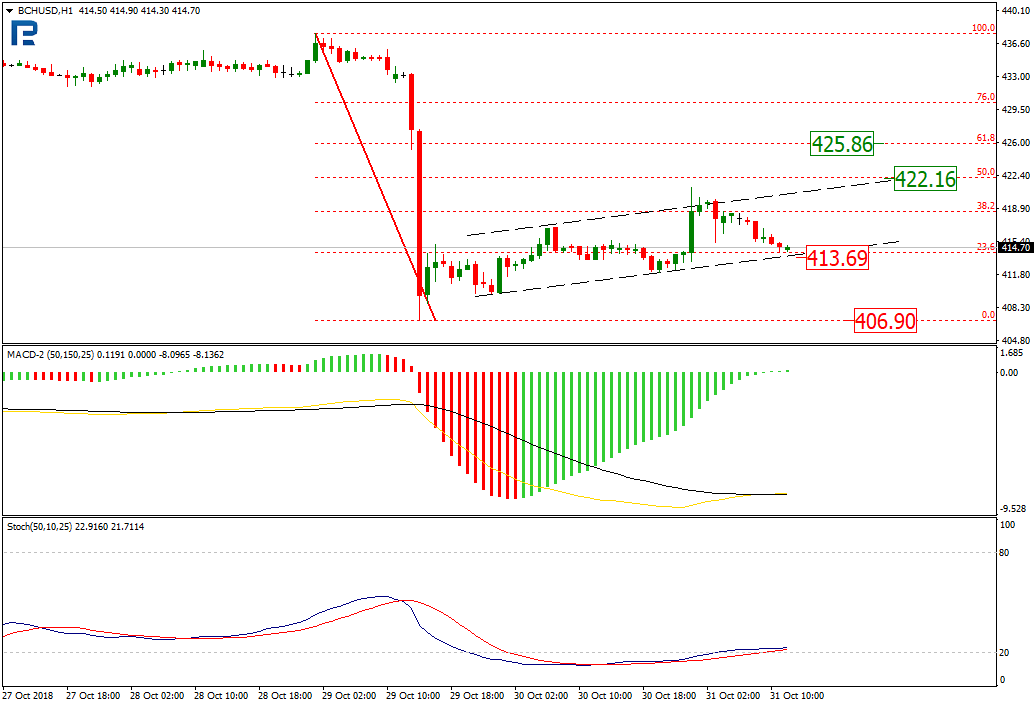 Technically, Bitcoin Cash is forming an uptrend on H1, this being the previous downward move correction. The price is currently testing the correction channel support.

Both the MACD and the Stochastic confirm the micro trend being formed, which will perhaps continue. This makes us think the price is very much likely to bounce off the support and head towards the resistance at $422.16, or the 50.00% Fibo retracement. 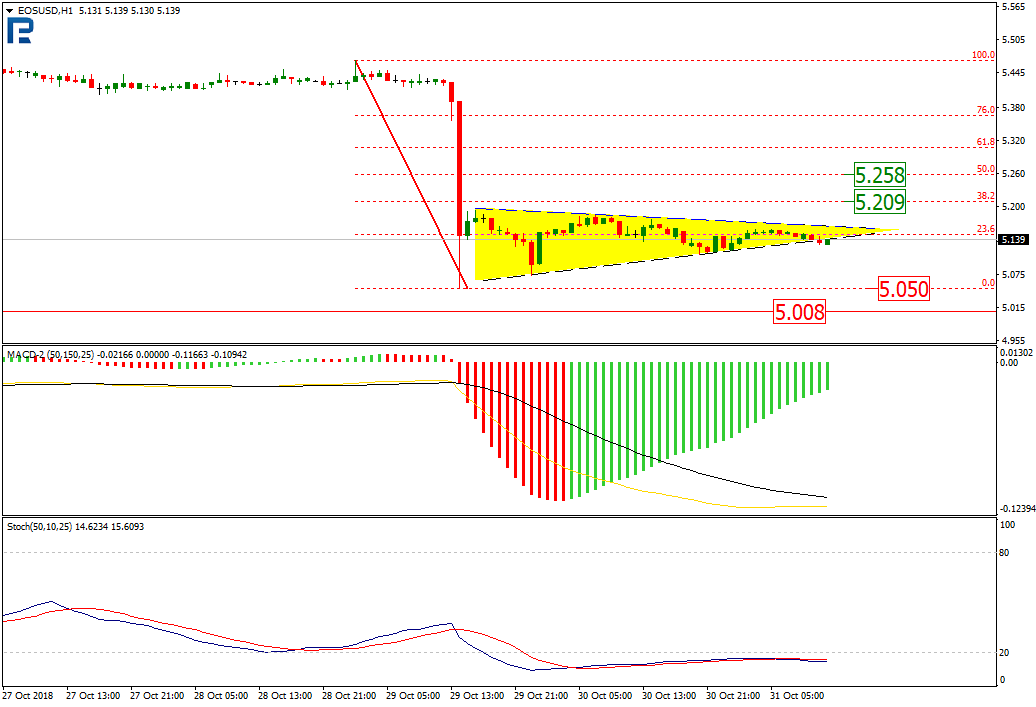 Technically, EOS is forming a triangle correction pattern on H1. This looks like a local consolidation, which may end with a rise or with a fall alike.

The lower triangle boundary test may lead to a breakout and a fall to the low at $5.050. If this low gets broken out, too, the price will likely head to the fractal support at $5.008.

Neither the MACD nor the Stochastic have formed any signals yet. This means that if the price goes back to the resistance, a correction rise may follow heading towards 38.20% and 50.00% Fibo.

On H1, Ether correctional phase is continuing. Currently, it has reached 38.20% Fibo. If the upper correctional channel boundary gets broken out, this will mean the correctional rise is going to continue.

Meanwhile, if the lower boundary is broken out, this will mean the correction is over, and a new fall is about to begin. The immediate fall target is the current low at $191.01, and then the fractal support at $189.24. 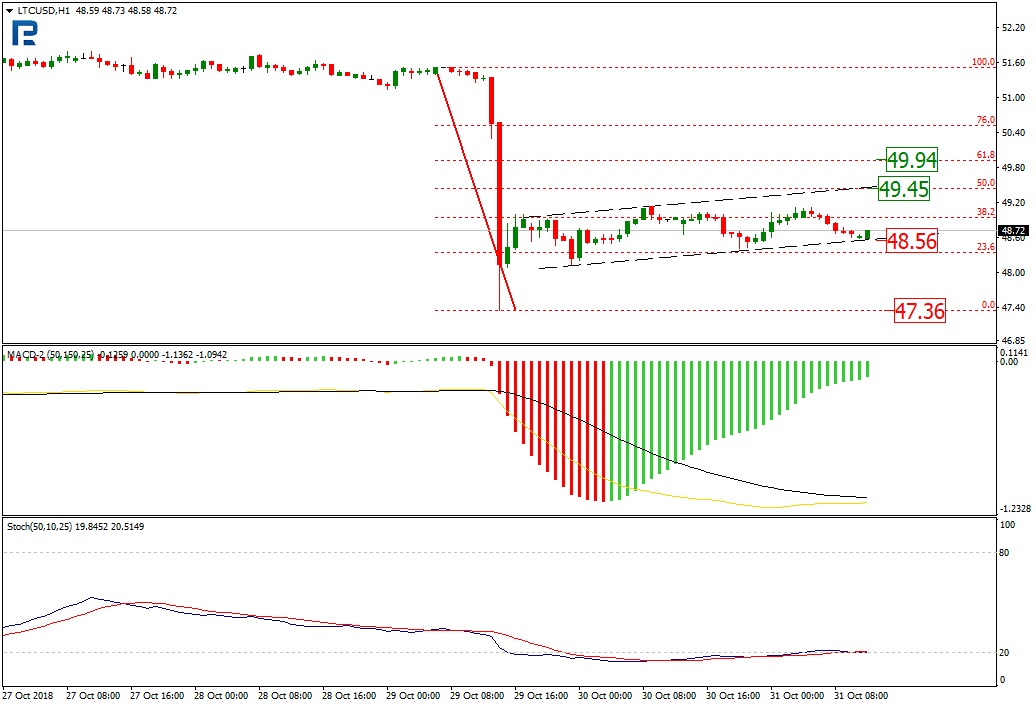 Litecoin is rising within the correctional phase. The trend is forming within a stable channel, which may lead to the price heading to the local resistance at 49.45, or 50.00% Fibo.

With a breakout, an descending impulse may form within the prevailing downtrend. This is well confirmed with the Stochastic being in the oversold territory. 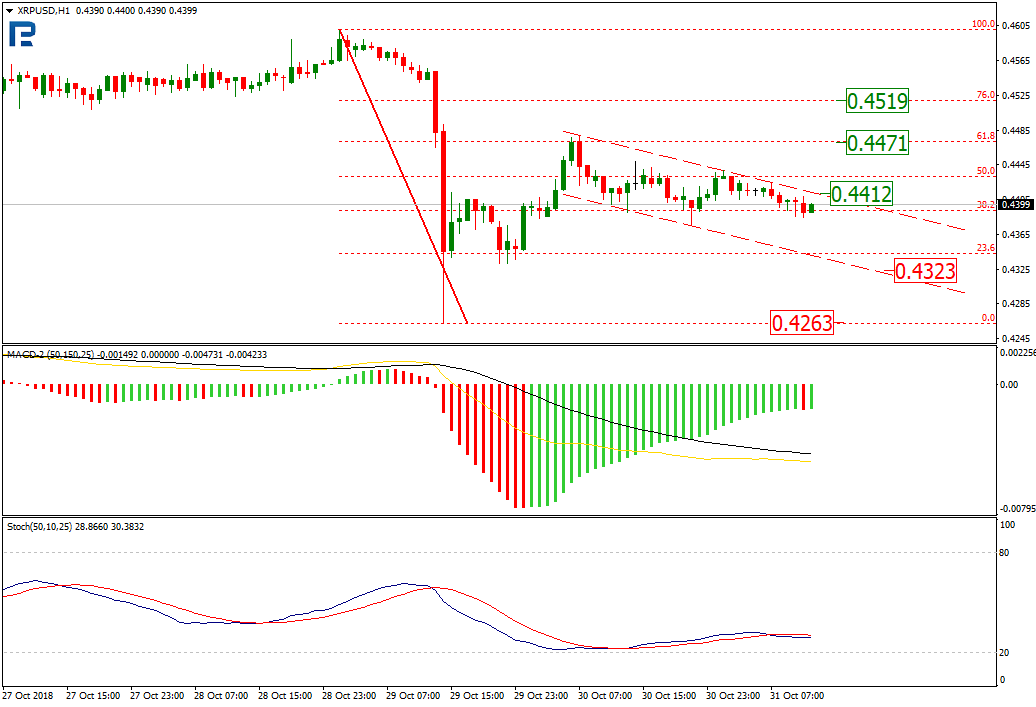 On H1, Ripple finished the correction phase after reaching 61.80% Fibo. The current descending micro trend may be just a small move within the overall downtrend.

The local target may lie at the current channel support at 0.4323, and then the key low at 0.4263. However, the resistance may well get broken out, too.