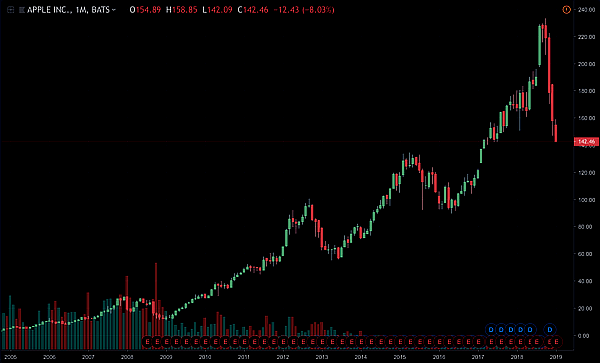 “While we anticipated some challenges in key emerging markets, we did not foresee the magnitude of the economic deceleration, particularly in Greater China.
In fact, most of our revenue shortfall to our guidance, and over 100 percent of our year-over-year worldwide revenue decline, occurred in Greater China across iPhone, Mac and iPad.”
Those two sentences sent Apple’s stock (pictured above) down another 10% today, translating to $100 billion of value vanishing in one of the worst day for the world’s top stock.
Apple’s price has fallen from just above $230 on the 1st of October 2018 to now $142, with Dow continuing its decline as fears grow of an economic slowdown and perhaps contraction.


Dow has managed to sideway for much of 2018 in what was one of the worst year for all investments. In December, however, that big red candle breaks downwards. A little bit of green during the holidays has seemingly now given way to red, down 2.5% at the time of writing.
Recent data from China show a contraction in manufacturing in the last quarter. This has reverberated to South Korea which saw a considerable 13.9% drop in exports to China.
Tim Cook’s stark warning of an incredible 100% revenue decline in China may have added to concerns that the world’s second biggest economy might be facing some significant challenges.
It remains to be seen whether that’s to the benefit of the United States. British manufacturing data surprised everyone by showing growth. An incredibly weak pound may have much to do with it, while the dollar remains very strong. So whether it will mirror remains to be seen.
America’s economy is however growing, but with many corps having their manufacturing base in China, whether we might see a contagion is not clear.
As the Treasury Secretary said, banks are strong and full of money. So the music may keep on in USA, but it may be time for a hangover in China which might affect the rest. The trillion dollar question being whether for good or bad.

Gold is effectively roaring. The shiny little thing has seen no love for so long, but now is dancing with joy.
We all know what that means. The brick is good for only parking money in times when other options are not very appetizing.
House prices are falling in London, and pretty much everywhere of relevance. Bonds might be dicy now with the US gov having to pay a trillion in just interest. Oil is down the gutter.
So Putin’s bet of hoarding gold looks like may well pay off (did you know by the way Putin’s net worth is $70 billion? Is that true? Twamp apparently “only” $3 billion.)
The other trillion dollar question is whether all this is good for bitcoin?
The thing is slightly up today, but really kind of not moving. The sequence of events recently from memory has been a mini bull run for XRP, doubling in days. Then BCH, doubling again and a bit more. Then eth, doubling in the past two-three days. Bitcoin’s turn? No crystal ball sire, none!

The asset is uncorrelated according to many studies. That doesn’t mean it doesn’t sometime correlate. It might negative or positive with gold for a month or two, then with stocks, maybe with the volatility or fear index as some are saying recently, but for a month or two.
It generally does its own thing because it is a pretty unique thing. No kid surfing the internet in South Africa, for example, gets excited about some yellow brick. Bitcoin, however, might give him/her some meaning, that cool factor. Might introduce them to coding. Might give them an entrepreneurial drive. Might channel their energy to productive uses.
Cryptos, however, have not seen a stock market crash in the west, but they have in China. In 2016, for example, Shanghai’s stocks effectively crashed. That sent the Chinese to other assets, with some finding their way to bitcoin which saw continued slow (by crypto standards) growth in 2016 and then fast growth in 2017.
Can’t tell much from one data point and the past doesn’t predict the future, but that $100 billion wiped out of Apple will have to find some place to park. Diversification being the name of the game, you’d think some of it would find their way to 90% off cryptos.
There’s contrarians all around though, so maybe they’ll all just go fiat at the mercy of the maestro who might now change his tune if he wants to keep his job.
The recent data, however, might focus the mind of China’s 1337. A crash there may well mean an uprising. Local war may be a choice of distraction. The $200 billion a year, or so, they spending on those army toys, afterall, may well want to have some show. The trillion dollar question there would be whether such show would make any potential uprising worse as potential soldiers turn against their own leaders rather than other peasants.
The prosperous French are on the street, adding to the complexities. In sociology they say uprisings happen when things are getting better. People get dissatisfied with the fairness of the better.
The easy and peaceful solution in France is an Ancient Greek style people’s parliament with ordinary individuals randomly selected from the electoral roll, jury style, to sit next to the other law making houses. The trillion dollar question there is whether they’ll peacefully give it.
It so often happens that nothing seems to happen and then something happens. There’s a certain mix in the air that ought to make everyone focus their minds. Peace first and foremost at almost all costs and in all lands ought to be the primary goal of everyone.
Any changes must be incremental, but that means the rulers or the other side ought to listen. Trump has reasonable grievances with China, and especially in this space where they banned our crypto exchanges, he has our support. He may have gone too fast, however. His roaring lion negotiating style may have not been sufficiently sensitive.
What goes on behind those closed doors we wont know for perhaps a century, but on the surface it appears China has not been accommodative at all. They need to get back on the table. They need to provide certain guarantees that they won’t just close down a western business or whatever. Because as Trump showed, the west can play that game too.
As any adolescent learns, it is far better to play nice/conscientiously as it helps both. The alternative might help the cheater for a bit, but after that brief period it hurts both and quite a lot. There are no shortcuts in life. King or peasant.
Nor is racism and so on or nationalism and so on a relevant factor. It’s a matter of fairness. You can’t close the exchanges while keeping the miners, for example.
While in France, former Rothschild’s Macron should know that you can arrest people, but you can’t arrest ideas. The use of force in a peaceful land only radicalizes the young. We know where that ends and there is no reason whatever for it to get anywhere near there in prosperous France.
As a new generation rises, there are some difficult problems we have to tackle so that we can enjoy prosperity for a century or more. Our parents should listen and listen well. Though their wisdom is much respected, they should realize the children have grown and they have their own life to live and their own way of doing things. Not least because they now want to have their own children to think of.
The passing of the batoon is a ritual since time begun. All should realize there comes a time when one has a heartfelt debate between mother and son. For the times are changing as this second decade of the millennium nears. Certain reforms are necessary.
The outcome may well be the beginning of a golden age for this is the most educated and the most resourceful generation in history.
These pages will wave Chamberlain’s white flag to the end, but as they have pressures from above, the intellect has pressures from below. The pen right now is in a race with the more “stupid” ones.
They take control, the pen is first on the line. The centre ground thus needs to hold the upper hand. Gradual, incremental, but reforms. For they are necessary. In the absence of it, the longer the dog is chained, the wilder it becomes, and the more it has no care for the pen or indeed anyone else.
The challenges of 2019 are in many ways easy to solve, but the quadrillion dollars question is: will there be a genuine will from focused minds to solve them?
Copyrights Trustnodes.com