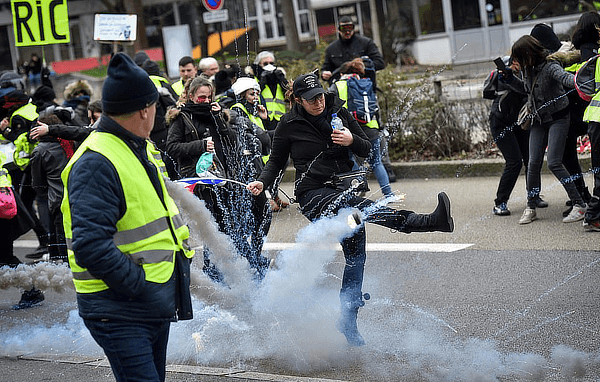 Nicolle Maxime, who some call a spokesperson for the yellow vests movement, has stated they are organizing a run on the banks.
He said the yellow vest movement is backed by around 70% of the population in France. He says yellow vests will coordinate a day, calling anyone who can to withdraw as much cash as they can from their banks. He hopes that 70% of population will do that, with no fixed date provided.
The video in French has been seen by more than 200,000 at the time of writing, with bitcoin rising slightly around the time it was published.


Their focus on the banks highlight the primary driver of this movement. A sense that the current political system is effectively rigged in favor of the rich at the expense of everyone else.
They call their president Rothschild’s Macron as he used to work at the bank prior to rising to the highest office in the nation.
In their protests, riots, or uprising, their energy is usually focused on bank branches, with a number of videos showing their raidings of banks and documents there.
Macron held last month an emergency meeting with bank CEOs where they agreed to halt and/or limit highly punitive overdraft bank charges.
That however only raised the question of why did it take an uprising for such charges to be made. Why was this not done before despite more than decade long complaints and even Supreme Court cases in the west regarding a practice that many see as preying on the poor.
In combination with about half of all taxes in France coming from VAT (ordinary people), on top of income taxes and so on, while just 40 or so of the top rich in America command as much wealth as half of America, the movement that begun in protest of a tax hike on fuel slowly took a more revolutionary spirit.
Their disparate demands may be many, but the one that primarily drives it is a radical and yet a peacefully incremental change to the social contract or to how the nation is governed.
They want a people’s parliament, a jury style random selection of 500 ordinary citizens from the electoral roll who in combination make up one of the law making houses of parliament.
Then such matters like overdraft charges can peacefully be debated and discussed in the people’s parliament, rather than requiring an uprising for the people’s voice to be heard.
“Those who question our institutions will not have the last word,” the French Prime Minister, Edouard Philippe, said on Monday.
That appears to be throwing out of the window Macron’s promise of a national debate to discuss “ecological, fiscal and institutional questions.”
Whatever happens to the current movement, however, a self-evident idea has risen. Elections may have worked in the past, but it now appears clear that the electoral system is rigged by the rich donors, the lobby halls, the sophisticated corruption through revolving doors, and the plainly discriminatory laws, like the Securities Act 1933, which quite barbarically closes the gates to value production on all but the rich.
The many examples from living memory make it quite clear that ordinary people have no real representation. The DNC leaked emails showing the booting of Sanders being just one such example.
It would be a considerable mistake, thus, for institutional questions to not be debated. For the protests so far, although containing some violence, are still largely peaceful.
We do hope the French elite does not close their mind to discussion for that in effect would tell the French and western citizens that the critique of the yellow vests – chiefly no representation to the point their only say in law making is riots – is correct. Nor does language like this help to calm the situation:
“The government favours updating the law in order to sanction those who do not respect this obligation to declare protests, those who take part in undeclared protests, those who arrive at protests with balaclavas.”
In effect, so threatening another Catalonia in France. And what does the prime minister or Macron think that will lead to? Especially considering the answer as it regards this current movement can be irrelevant, but what will the next movement employ in the face of such threats?
In a number of videos, you can see yellow vesters throwing smoke bombs at the police. Where did they get them from?
With some 70% to 80% of France supporting the movement, and with the police, the army, and even the intelligence service which knows better than most how rotten certain things are, with all of them effectively being ordinary citizens, one can easily speculate this movement has both civilian and otherwise backing.
The centre thus needs to get ahead to keep things peaceful. Because with trust in what now some call pravadastream media at all time low, or Congress, or Macron, it is quite obvious that peaceful reforms for real representation of 9-5 workers are very much necessary.
Otherwise the centre is very much threatened because there are now skimmerings on both left and right fringes which we all know will only enslave further the ordinary citizen if they ever get anywhere near power.
The French elite, thus, should be very careful with their words and should consider as well as implement peaceful and gradual reforms which give real representation in the law making process to ordinary citizens.
Copyrights Trustnodes.com