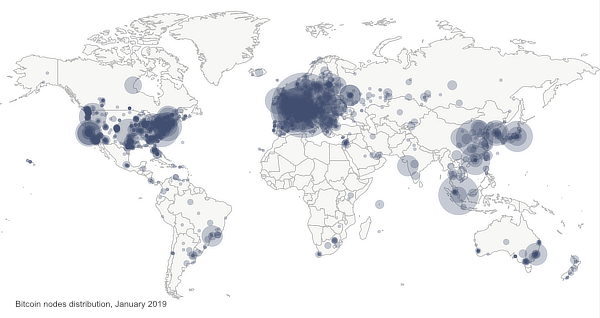 Bitcoin has overtaken ethereum in node numbers for the first time since at least 2016 with bitcoin currently having 10,266 nodes while the highest number for eth is 10,078. Etherscan, however, counts only 7,857 eth nodes.
There used to be some 30,000 public eth nodes and even during summer 2018 there were some 16,000. Now that’s halved again to just about 8,000.
That may be because previously you kind of had to run a node if you wanted an eth wallet. Now there’s plenty of SPV wallets for ethereans to choose from.
It may also be because you sort of needed a node to play with smart contracts and so on, while now you can just tap Infura, which handles billions of node related requests.
A similar thing happened in bitcoin, with nodes there reaching a low of 5,000 sometime in 2015-16. Now they’ve doubled to 10,000.
That seems to be counting a small number of BCH clients, with about 4,000 bitcoin nodes upgraded to the latest version of 0.17+.
The reason for what appears to be an increase in bitcoin nodes may well be because the community there has also grown considerably since 2015-16.
New exchanges and businesses therefore have probably begun running a node, so increasing the numbers. While besides devs, ordinary individuals don’t tend to do so very much.
That’s because in bitcoin a node is about 200 gigabyte while in eth it is 100 gigabytes or so. Both in addition require CPU resources, bandwidth and so on, and both can take some time to initially sync.
Making it a bit inconvenient for most people to run a node, but in eth that will change once they move to staking in as far as they’ll get paid to run an eth node.
The staking design is such that it may pay off to have a unique set-up so that you do not suffer from some potential systemic fault, say in the operating system, which affects many staking nodes at the same time.
That’s because if it’s just your node which is down for a bit, you do not get any noteworthy slashing punishment. If it’s say 30% of stakers that all go off at the same time, then you might notice the punishment.
That would mean a staking pool might not be a good idea. It may also mean that you might want a node for each staking account. That maybe you should run some obscure, but secure, version of Linux and so on.
What may well happen, however, is Coinbase or some other exchange saying they’ll do the staking for you and then most ethereans might mumble something, but none of them will care because convenience.
Meaning that the best way to increase node numbers is probably by increasing the ecosystem as bitcoin’s node stats show.
Copyrights Trustnodes.com