Ethereans are going a bit crazy over free money in the form of ERC20-ed Reddit karma points that has turned ethtrader into donuts trader.

In collaboration with reddit admins, ethtrader is piloting an experiment of sorts where accounts are given points based on how much they contribute to the subreddit.

Some have amassed 200,000 points while Trustnodes’ “official” account, which rarely engages to only perhaps make a comment once every three months or so, has gained 6,000 points.

These points are meant to address sybil attacks by many new bot accounts as it would necessarily take some time to gain points with 2 million of them issued to all contributors every week.

The points can then be used to give weight to votes in polls and can even be used to buy a banner in the new reddit design.

The new design hasn’t attracted a favorable reception. People have used reddit for years and they don’t very much like jumping around through the latest design trends.

The headline font is black in the new design rather than the old comfy blue. There’s too much stuff going-on, too many colors, too much highlighting, bolding. It’s just not cool.

So the admins perhaps came up with these points to “trick” people into using the new design grumblingly or otherwise.

They’re called donuts due to an old meme from a time when ethereans dreamed of the price of eth reaching donut parity.

Then they got a bit too greedy and jumped from a donut to one lambo, leaving them with just a pair of Nike sneakers.

Anyway, we’ll have some more commentary later, but first of all we had a testrun through following the Uniswap instructions.

So first we had to connect donut.dance to our reddit account. As we don’t quite know who this donut guy is, we thought of using one of our reporter’s account who has gained just about 800 donuts. 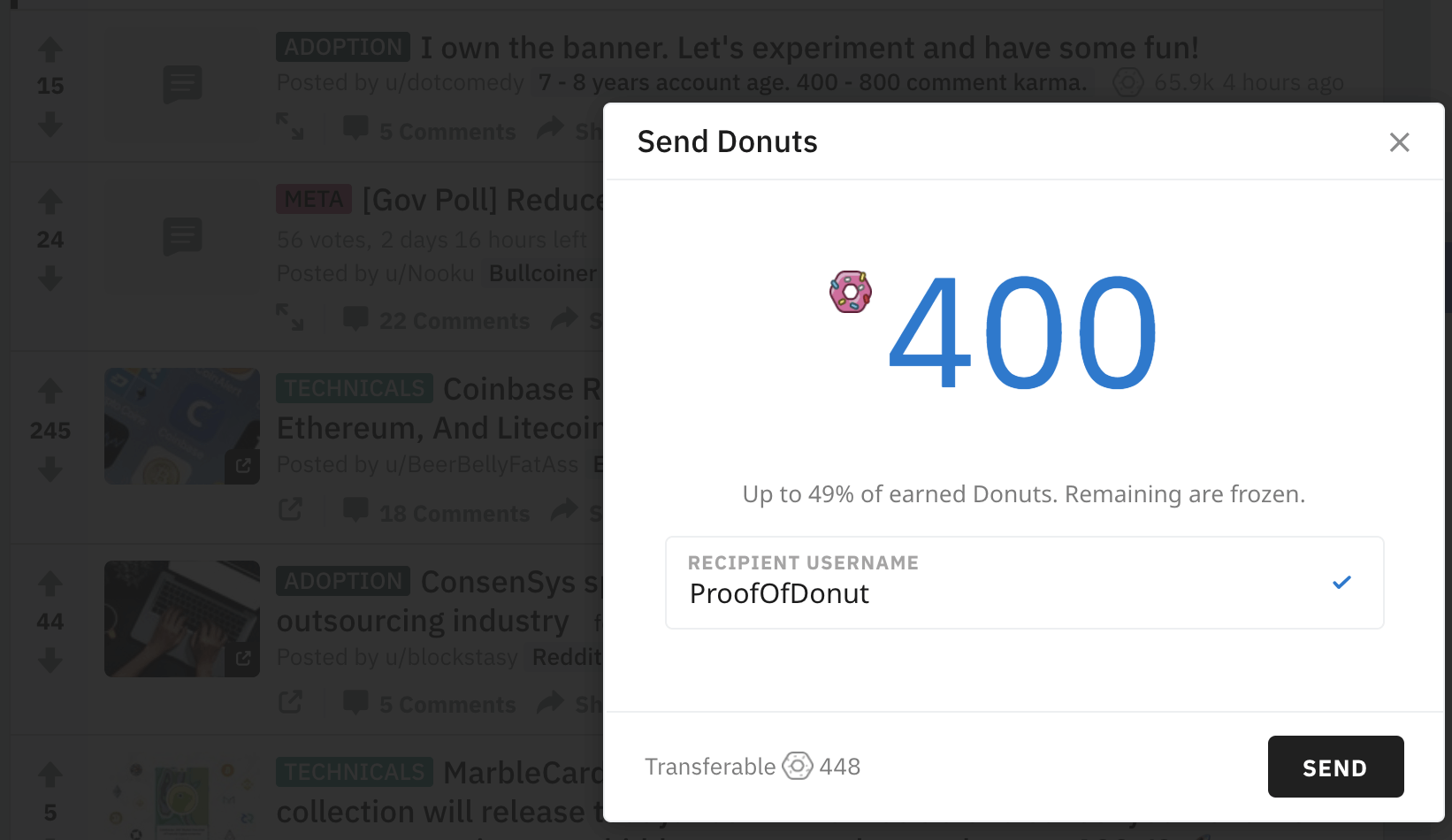 Succumbing to the admins’ plot, we went to the new reddit and from there sent about half the points to some other guy we don’t know.

After a bit of refreshing on the dancing donut, it now told us we have 400 points. We don’t care much about those though, we want eth, so we withdraw:

Now we go to Uniswap, which is “a protocol for automated token exchange on Ethereum.”

As we’re so great at following instructions, we first got disappointed that they were not showing donuts on the drop-down menu. 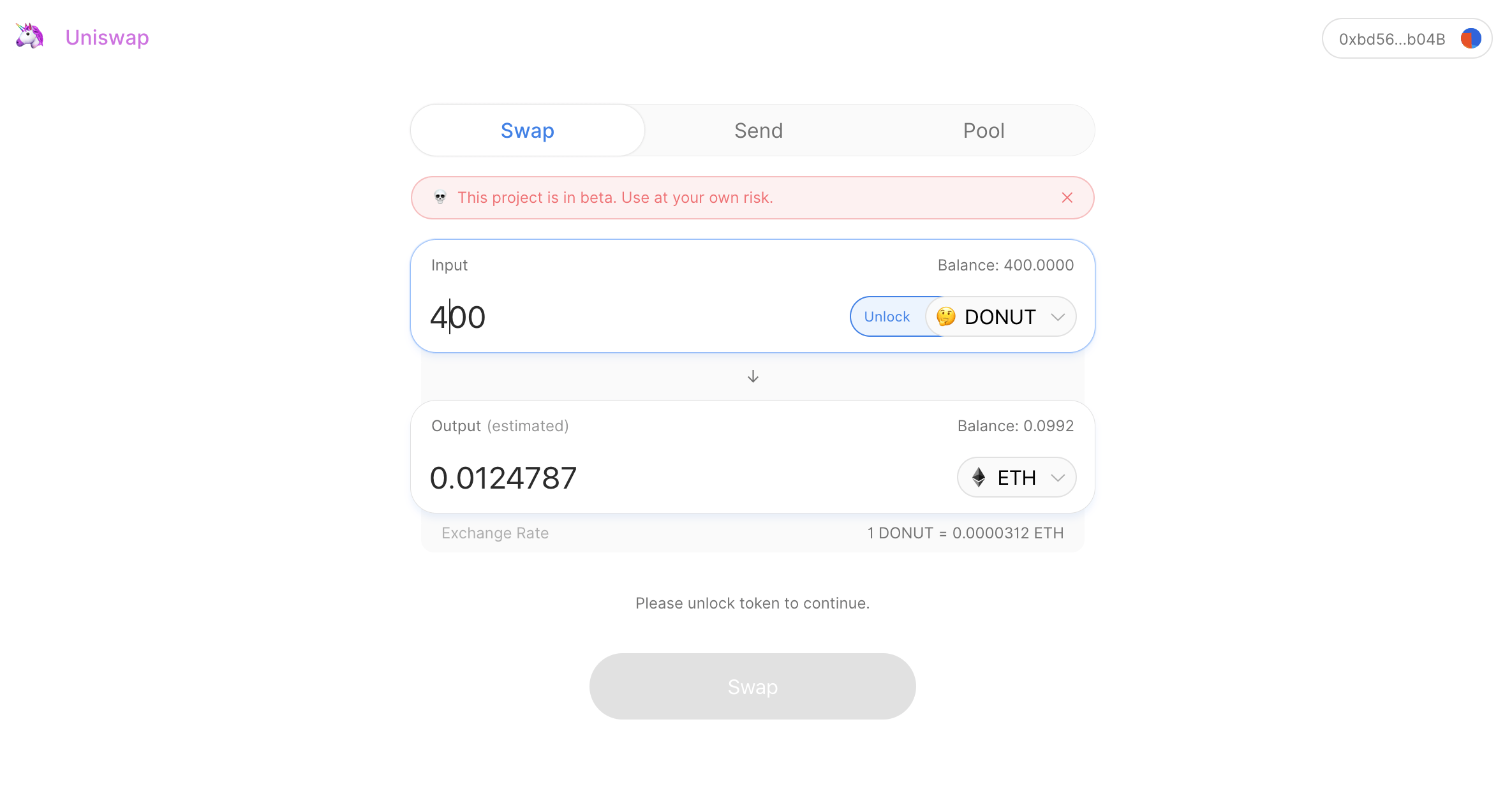 Wow, 0.01 eth? That’s like ten dollars. For 400 points? Quitting muh job, one reporter could have joked, ethtrader shilling is where it is.

Poor kid. Should have seen his face when he realized that 0.01 is just $1 dollar now as eth has not been worth $1,000 for more than a year, but too cheap, hodl the donuts, he didn’t say. 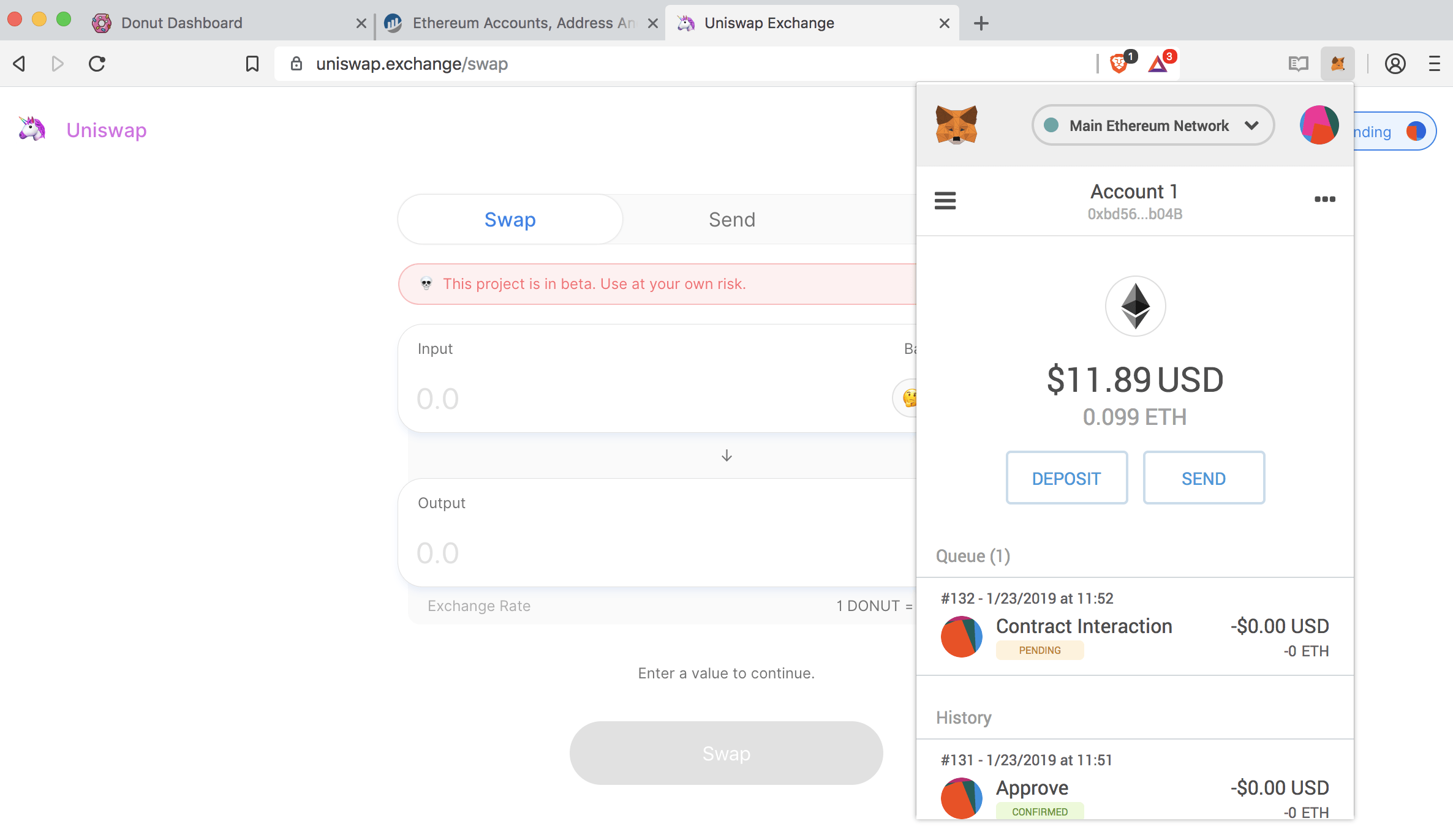 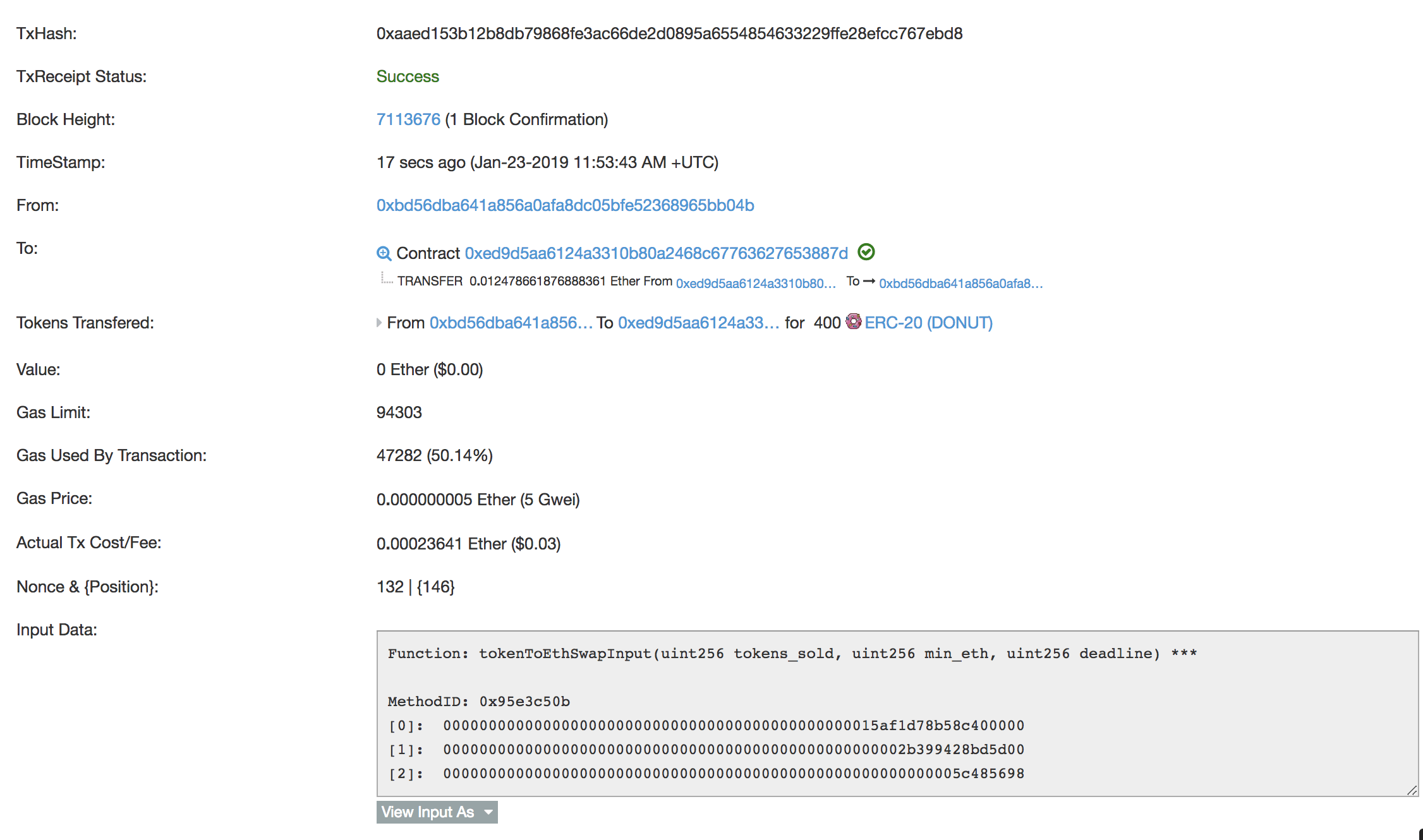 So that $12 balance became $13 something. Every little bit helps. Not sure if that 6000 donuts on the official account will go to the moon tho, or whether 0.1 eth for stupid points is quite a steal.

Anyway, all this was very smooth. 10/10 on the UX. With it all quite a bit confusing, however, on the actual substance.

What we appear to have here is the donut guy acting as a centralized pegger of the “analogue” points who are then tokenized in a stablecoin fashion.

Once tokenized we can now trade them like any other token, with people sending points to the donut bank for the tokens or sending ERC20s for the points.

Those ERC20s can then be bought or sold for eth. So through some layer, reddit is effectively giving out free money.

We say “free.” There may be costs to it. People could hoard donuts to fake their popularity or the amount of contribution to the sub. That would give them a mention on the ethtrader sidebar if they’re a top holder. It might allow them to fakely skew polls, and it might allow them to buy the top banner similar to the one we’ve screenshoted in the featured image.

Would that matter? Well it depends what the aim is. For starters, reddit could be showing with this experiment that they can also do something similar to the Basic Attention Token but in a more “analogue” fashion.

That’s because, in a way, advertisers on reddit are effectively paying contributors in as far as the donut has value due to demand for the banner, value that goes to the point receivers. Making it pretty much BAT in a nutshell, especially if reddit as a publisher keeps for itself some percentage of distributed donuts.

The other aspect is that they’re kind of saying reddit too can do something like steemit without having to put stuff on the blockchain directly.

The experiment is also perhaps showing that in this very simple form the whole thing can easily be gameable because whoever has most money can have the most influence, rather than whoever contributes most or at the highest quality and so on.

What they are definitely saying is that you don’t necessarily need the blockchain part directly because their centralized database can also issue points to incentivize people to go to the new design presumably because the reddit designers are a bit too lazy to make the new design like the old one, but more crispy.

The problem, however, is that the donut bank might not actually give out donuts because it wants to exit scam. Or the centralized database might be biased in some ways by perhaps preferring American contributors or through keyword analysis by preferring liberals or conservatives or techies or whatever they want.

Then the other problem is the reddit admin might secretly print loads of donuts and give them to someone unfairly or might crash the donuts market or they might delete all the donuts and close off the experiment.

Does anyone care about those aspects though? Well, yes. Grandma might not, but the smart kid coder designing the system might ask why shouldn’t he just make the donuts be natively ERC20s? It’s not hard. You just add web3 to the reddit backend and link that to the donuts distribution algo and all these trust related problems are gone.

Except, are they? How does the smart contract know Trustnodes has contributed x so should get y donuts? Trustnodes itself would have to be an eth address with the karma algo on the smart contract. Otherwise you’d need some sort of Oracle. In which case, the native aspect of the ERC20 part might be worse than the current set-up.

That’s because while reddit has effectively added a layer due to the need of stablecoinization, it has removed the far bigger layer: the need for MetaMask.

You’d think Brave Browser would natively incorporate a MetaMask like function, but it doesn’t, presumably because they’ve just copied Chrome.

Google might want to gain some goodwill by doing so, but they’re so ahead in browser market share that they probably have no incentive to add real new functionalities.

Likewise Microsoft which hasn’t innovated in a millennial’s living memory. Opera does, but their problem is that they don’t have any users relatively speaking.

Meaning that while most ethereans probably do have MetaMask, if this donuts stuff is to be used more widely on reddit, then the MetaMask requirement for the natively ERC20 token might be a bigger barrier than the donut bank.

So the smart coder might not easily be able to say: well, why not just have it natively tokenized. Nor is it clear really whether it can be done if you wanted to do it “properly.”

That’s because it is difficult to see how the smart contract can store all the votes, points, nicks and so on, without there being a centralized point.

You can have it all on IPFS or Swarm and link it through a hash, but to what extent that would work in practice remains unclear.

Making all this silly stuff about donuts a very serious business because the tech giants are now probably trying to incorporate blockchain aspects to remain competitive or to fend off any potential challenge to their dominance. So start-ups have to get a bit smarter.