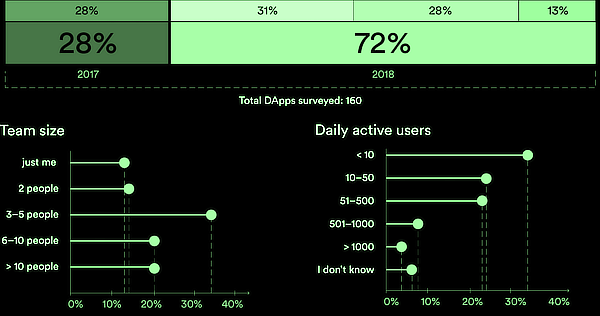 Ethereum dominates the dapp space by far as the platform of choice for new dapps according to one of the most extensive survey of its kind.
Fluence Network, a blockchain data analytics start-up, says they reached out to 900 projects out of 1,624. About 700 had no means of contacting them, while 160 completed a survey.
Some 72% of all dapps launched in 2018 (pictured above) they say, with the vast majority self-funded at close to 60% while 16% had an ICO with 18% being VC backed.
87% of dapps use ethereum, with 19% on EOS and 8% on Tron. 10% choose one or more platform with 4% building on all three.


An incredible 63% choose Infura to connect to the ethereum network, with Infura being a node infrastructure provider handling billions of requests per day.
One reason for choosing Infura was because “Geth could not finish synchronisation for 4 weeks on a good machine,” according to feedback from Alice devs with Alice itself being an interesting project that ensures you pay a charity only if they achieve their stated goals.
In addition, “almost half (48%) of surveyed DApp projects were relying on a traditional cloud to run their backend code,” the survey says, adding:
“The same number of DApps were using a decentralized storage solution like IPFS (32%) as were using a centralized CDN (31%). A similar proportion was found in respect to databases: 31% of DApps relied on a centralized database while 25% of DApps used a decentralized DB.”
The survey makes for a sombre and a more realistic reading of pain-points, with most dapp developers saying on-boarding users was an obstacle in addition to safely storing the crypto.
Their main concern, however, was the “limited number of users” (67%) and “poor user experience” (44%) with 36% citing scalability which itself might affect the other two.
So although ethereum does dominate by far, there’s a lot that can be improved with the crypto space still at a very early stage of the game.
Copyrights Trustnodes.com