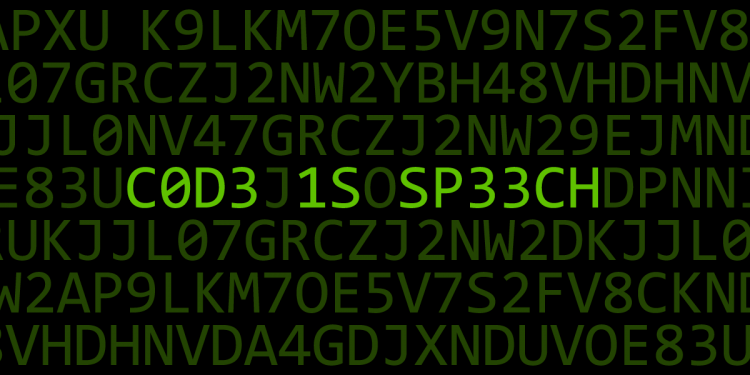 The Electronic Frontier Foundation (EFF) has sent an open letter to the Securities and Exchanges Commission (SEC) where they say “imposing liability for, or prior restraints on, publishing and distributing code would violate the First Amendment and chill innovation.”
EFF says they are concerned about overly broad language used by SEC in statements related to a cease and desist order against a decentralized exchange, Etherdelta.
Referring to a statement made last November, EFF says:  “The SEC’s broad language about ‘an entity that provides an algorithm’ could include cryptographic researchers and coders who are publishing ideas or code for debate and discussion, and working to develop systems that could benefit the public.”
They argue that courts have upheld for decades the principle that code is speech protected by the first amendment, thus any prior restrain through requiring a license would be unconstitutional. EFF says:
“Even if the individuals never deployed the code and never actively maintained or promoted a decentralized exchange, this overly broad language implies the SEC could well expect people merely writing and publishing code to register as a national securities exchange or face liability.
This isn’t just dangerous because it could quell research; it’s unconstitutional. The free speech protections enshrined in the First Amendment and upheld through court cases across decades include the rights of individuals to publish their ideas without preemptively obtaining a license.”
In its nine pages correspondence to SEC, EFF further says “the first amendment also protects financial transactions.” They add:
“In addition to the fact that the code behind decentralized exchanges is itself speech, decentralized exchanges also foster freedom of association by allowing for pseudonymous transactions that are resistant to censorship. See NAACP v. State of Alabama ex rel. Patterson, 357 U.S. 449,460-62 (1958).
Protection of such financial transactions is critical to ensuring public access to speech, as the ability to collect funds often plays a near-existential role in expression, online and offline.”
They conclude by asking SEC “to clarify that it recognizes that merely writing and publishing code is constitutionally protected, in order to ensure that blockchain innovation can continue to thrive.”

The Securities and Exchanges Commission has taken a number of actions that have been highly criticized for creating policy through enforcement.
The criticism has also come from a SEC commissioner herself, Hester Peirce, who recently said: “enforcement actions are not my preferred method for setting expectations.”
Despite a number of broad policy statements with wide ramifications, the crypto blockchain industry has generally failed to limit SEC’s overreach as it lacks an advocacy group for the entire space.
The EFF in contrast has decades of experience in standing up to over-reaching regulators or law makers with a circa $12 million yearly revenue allowing it to flex considerable muscle as, according to Wikipedia:
“EFF provides funds for legal defense in court, presents amicus curiae briefs, defends individuals and new technologies from what it considers abusive legal threats, works to expose government malfeasance, provides guidance to the government and courts, organizes political action and mass mailings, supports some new technologies which it believes preserve personal freedoms and online civil liberties, maintains a database and web sites of related news and information, monitors and challenges potential legislation that it believes would infringe on personal liberties and fair use and solicits a list of what it considers abusive patents with intentions to defeat those that it considers without merit.”
The existence of the crypto space itself may well owe much to EFF which in 1995 established through a court case the principle that code is speech. That led to a striking down of crypto exporting licensing requirements, with exporting in the digital realm meaning mere publishing of cryptography code.
Following a number of court actions by SEC concerning different blockchain related aspects, EFF may now potentially provide legal representation and assistance to dapp developers and others in areas where legal principles are being established or should be established.
They currently accept Bitcoin and Bitcoin Cash donations, presumably from BitPay which hasn’t yet added other cryptos like Ethereum.
A strong showing of support there might perhaps persuade them to be a lot more active in protecting cryptonian liberties through the court system and  otherwise.
Copyrights Trustnodes.com