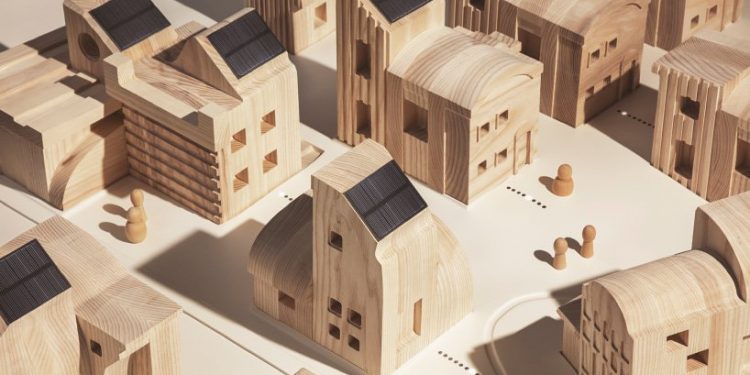 One of the world’s best known furniture company with yearly revenue of $40 billion has designed an entire village at a scale of 1:50.
The playful prototype by Ikea’s innovations lab Space10 is a working showcase of an energy self-sustaining community that is powered by solar panels with households free to sell any excess electricity or indeed able to buy some from their neighbors if needed through the blockchain.
All of the buildings are hardwired together to create a microgrid for energy sharing and trading in what the lab claims is a fully scalable model.
The project, dubbed SolarVille, shows that “technologies such as solar panels, micro-grids and blockchain open new opportunities: off-grid systems allowing people to leapfrog traditional grid electricity,” said Bas Van De Poel, Creative Director at SPACE10.


The blockchain aspect is handled by a start-up called BLOC (Blockchain Labs for Open Collaboration). We’re awaiting details on the design of this probable private blockchain, but Marc Johnson, Technical Project Manager at BLOC, says in a statement:
“The SolarVille project demonstrates how frontier technologies, such as remote sensors and distributed ledger systems, can be utilised to develop a transaction network that enables self-sufficient monitoring and optimisation of distributed energy resources in a localised network setting.”
The angle is climate change and/or providing energy access to the very poor 1.1 billion who are currently not part of the grid, but it could be quite interesting for western communities too as solar panels start becoming more widespread.

The project is being described as ambitious and a potentially fully realizable concept for the future. Thorkild Grothe-Møller, Co-founder of another startup assisting in SolarVille called WeMoveIdeas India and Blocktech, says:
“From a technical and blockchain-based point of view, the installation is true to an intended real world installation: All used software is free of cost and the required devices/servers are inexpensive.
The project demonstrates that it is possible to provide a transaction-based system for the less privileged humans having little or no access to electricity, which is both tamper free, secure against hacking and protected against central governance by powerful and sometimes corrupt companies and governments.”
We’ll update if further details are provided, but the prototype might show that peer to peer blockchain based energy trading in combination with other technologies like remote sensors does actually work at least at the scale of a village.
Copyrights Trustnodes.com