Thousands of bots and fake accounts pumping Ripple’s XRP have been uncovered through graph analysis that suggests a massive largely fake shill army is engaging in manipulating sentiment and thus Ripple’s price.

“There are various types of graphs I use and analyses I conduct,” says Geoff Golberg, an independent researcher focusing mainly on Twitter manipulation. “It’s quite manual and requires lots of time,” he says.

His analysis shows an incredible overlap between the followers of some of the most prominent XRP accounts.

“Every dot/node is a Twitter account which is following and/or being followed by GiantGox,” says Golberg, with the curiously named GiantGox being a fairly prominent XRP account.

If you shuffle through the images, you’ll see considerable overlap with the followers of Emi Yoshikawa (@emy_wng), who leads Ripple’s global business expansion strategy.

In-depth analysis over months with some of it detailed last year reveals some 8,000 suspected XRP related bots or fake manipulating accounts.

This is not precise science. Humans have the ability to fool other humans and that can include engaging in bot like behavior or in temporarily getting out of the “shill zone” to act “normal.”

The overall evidence, however, seems to be quite overwhelming, with it at times very much indisputable. 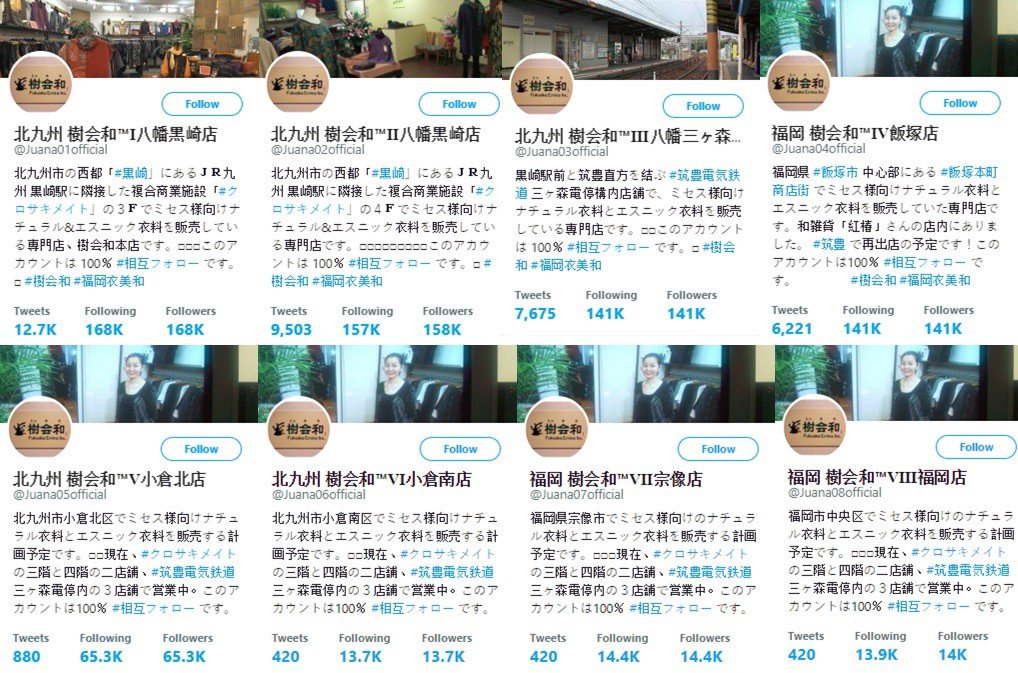 These are plain bots, now removed. Their relevance is mainly in inflating followers numbers. Following a twitter purge, for example, one account that at times tweeted about XRP lost some two million followers.

That’s an astonishing number. “One would think that Twitter would conduct a thorough audit on the account. The fact that it appears Twitter has not done so doesn’t surprise me one bit,” Golberg says.

Speaking to Trustnodes, “they’re not incentivized to remove inauthentic accounts as those inflate their platform statistics,” he said.

Where we have plain bots, shown through uncharacteristic graphs, the matter is fairly black and white, but this is a cat and mouse game. Wit versus wit.

We’ll zoom into one humanish account that represents the latest advancements in digital public relations and manipulations. 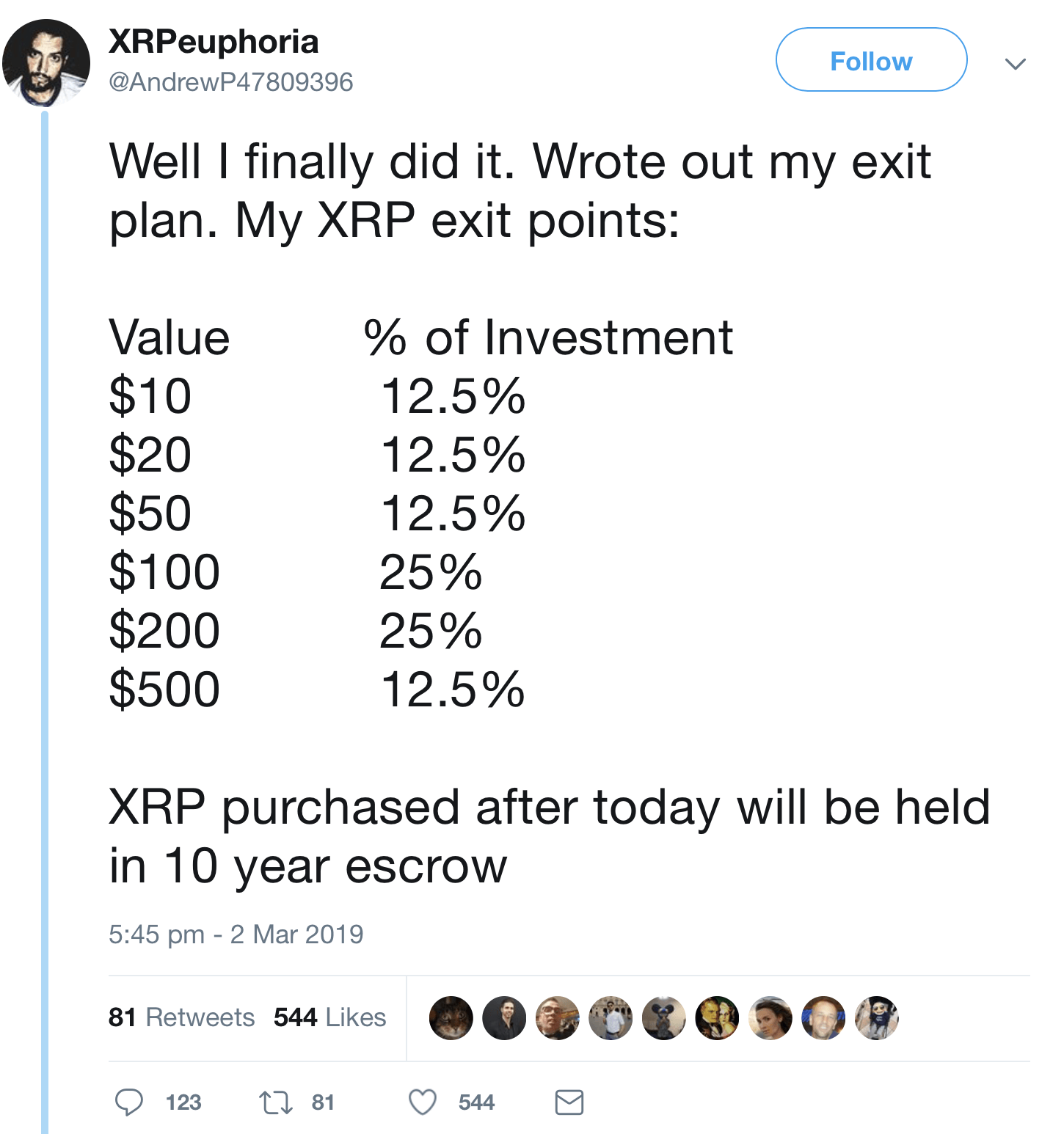 On the surface, this appears to be just another ordinary individual with an opinion, and that may well be the case.

Zooming in, the picture is very different. Reading through his tweets, or her’s as it may well be, one can’t escape the conclusion this is probably a fabricated account.

There are many things to notice in this image. The twitter algo of who to follow is revealing in itself, but more revealing is the fact that out of his circa 1,400 followers, XRP is mentioned 1,384 times in their name or bio.

Far more revealing, perhaps, is his Youtube account, an account that came to life only three months ago this December. In that first video, he says:

“Going from hour to hour, each day, with endorphins flooding your body, knowing that you’re holding on to this tremendous asset which is going to have a huge payoff… it’s surreal, holding XRP… it feels like I’m living in a dream.”

That is actually a cartoon as stated by XRP Euphoria himself who argues he looks better as a cartoon character.

A cartoon character that looks very realistic in some ways and that appears to have been designed by a British company called Camart which says:

“Our pedigree is in the production of complex and robust desktop applications, including utilities for the broadcast industry and our own video manipulation software.”

You’ll notice the 23 comments in a video of 500 views, quite unlikely. Or the circa 80 likes, translating to about 20%, which is even more unlikely.

More importantly, you’ll notice his twitter username has eight random numbers, a well documented phenomena of some twitter accounts using a first name followed by eight numbers that suggests its probably because it’s a fake account:

The reason for these random eight numbers is probably because the accounts are software generated en masse with smart phone boards then set up where humans can insta tap/click and shift between all these different fake identities.

Here we appear to have a fake video which is somewhat new. We’ve covered plain text based manipulation, as have many, but seemingly human like cartoon sentiment manipulation videos haven’t been seen before.

Ripple Labs sold about $400 million worth of XRP last year up to October 2018. What that money has been spent on, isn’t yet very clear.

They’ve announced grant programs, but half a billion is quite considerable. Just as are the costs for this cartoonish video that appears to employ very advanced emotional techniques to effectively fool the impressionables who by this account are told the starting point is $10 per XRP – which currently trades at 0.30 cent and then somehow goes to $50 trillion in market cap, half that of the entire global stock market and multiples that of gold.

It is worth remembering Ripple Labs and/or founders have circa 60 billion XRP in their possession when currently only 40 billion trades on the market.

That means Ripple Labs has an incredible amount of XRP to sell to the public – in the billions of dollars at current prices.

It also means they have a lot of funds to potentially pay for such fancy videos or shill armies and to engage in other marketing tricks in a very centralized and coordinated way.

Yet whether Ripple Labs stands behind it, isn’t quite known to the court standard, but who else would fund such shill army which on balance appears to be immensely sophisticated in manipulating the public?