The Rise of Initial Exchange Offerings 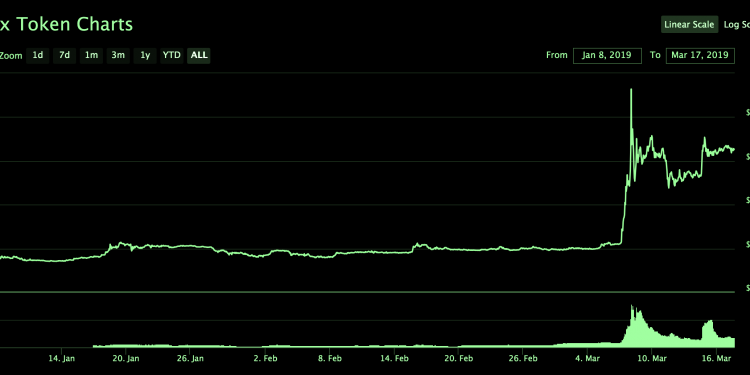 “Fundraising on the blockchain is one of the main applications for crypto. That’s very important for this industry to grow; we got to help entrepreneurs who build things in our industry.”
So said Changpeng Zhao, Binance’s CEO, who may have now begun a trend that some are calling Initial Exchange Offerings (IEOs).
Heads turned recently when a little known token jumped 1,000% in three days. BitTorrent token has sort of done the same. Suddenly, semi-instant 10x gains are back on the menu.
“Right now I have no plans on leaving and I have lots of plans for staying,” Jay Clayton, Chairman of the Securities and Exchanges Commission (SEC) said.
Some however seemingly plan to make him irrelevant through a mixture of centralized strength in a decentralized ecosystem.

A new program of us, we name it Spotlight, is coming soon, and we believe it will be a launch platform for hidden gems in blockchain that have real potential and value. pic.twitter.com/SuQRN3WQRu

That’s just the latest to soon enter what can be described as a nascent crypto stock market.
Initially, projects would put up a website, then market an Initial Coin Offering (ICO) with effectively no one doing any vetting except perhaps a crypto journalist here or there and even then at a surface view.
Now, Binance has done something new through their Launchpad. “It’s basically an exchange, an initial sales platform where we help projects to raise money,” Changpeng says. “If you are just at the white paper stage, then that’s a lot harder for us to evaluate. We do evaluate very strictly.”
We’re not aware of any published evaluation criteria, but they plan to do one or two IEOs a month. On Binance, they’re usually bought with the BNB token as well as, sometime, with eth or btc.
That’s been quite lucrative, with BNB worth some $2.2 billion. Others want in, so now we have a Huobi token.
For newcomers, Huboi was once a mighty exchange before China decided to shut its doors to this space. Yet Huobi never went anywhere. They currently handle about half a billion in daily trading volumes.

Looking for a better way to get access to emerging premium projects? We’ve got something amazing on the way called Huobi Prime. Stay tuned for more details @HuobiGlobal #HuobiPrime #HuobiGlobal #Huobi $HT pic.twitter.com/3U8bZ6mGpg

This is not a launchpad, they saying. It is, others say. Beauty peacocks as the premise is simple. If a cool token issued by an innovative project can be bought with your own token primarily, then naturally there would be demand for your token and a use case for it.
That’s in fact why BNB has soared in weeks, up 4x or more. Another one has now joined, BitMax. Not to be confused with BitMex, for they’re completely unrelated. The Max one is a very little known new Singapore based crypto exchange that appears to be targeting the Chinese market.


What we’re seeing here is something else somewhat new. People are given BTMX tokens as a sort of fees rebate. That makes trading fees kind of zero looked holistically. They may be charged 0.50%, but if say they get one token and thats worth 2%, then you get a bot and make $billions in volumes.
Whether this is a security, remains to be seen, but considering the amount of innovative energy in this space, keeping up will be hard.
“We are not going to innovate for you,” a SEC official said last year. Some in the west have cowered in front of these century old bureaucrats, but this space is a global space and it still has some smart cypherpunks.
Those of Chinese origin in particular are determined to break down the walls. Their inspiration, as always, the Nakamoto checkmate. That being the utilization of wit to peacefully achieve something that is unjustly constrained in a way that is unpalatable for you to suffer any consequences and, far better, in a way that makes you rich while benefiting the masses.
Catch me if you can, should have been the opening of this piece. The bankers’ regulatory attack is routed around, could have been another. The evolution of collective knowledge, a far more boring one.
Yet what we are seeing is a solution of sorts that addresses the problem of any randomer putting some site up since now exchanges will vett, just as we are seeing a solution to arcane restrictions since these are global exchanges and tend to comply with crowdfunding laws. Here’s something revealing:
“The users from the following countries and regions are prohibited to participate in the DOS promotion:
United States, Balkans region, Belarus, Myanmar, Côte d’Ivoire, Cuba, Democratic Republic of the Congo, Iran, Iraq, Liberia, North Korea, Sudan, Syrian Arab Republic, Zimbabwe, Algeria, Bangladesh, Bolivia, Cambodia, Ecuador, Nepal, Afghanistan, Burundi, Central African Republic, China, Ethiopia, Guinea, Guinea-Bissau, Lebanon, Sri Lanka, Libya, Serbia, Somalia, South Sudan, Thailand, Tunisia, Trinidad and Tobago, Ukraine, Uganda, Venezuela, Yemen.”
In effect, war torn nations, very poor nations, and China plus the United States of America, otherwise known as the land of the free which is now being restricted in such freedom by entrepreneurs of global jurisdiction.
Europe, much of South East Asia, and in this case even Russia, gets to play instead. Regarding the latter, “blockchain is ours,” they said last year.
With that revealing something. Governments overall have, surprisingly to many, backed this space and very strongly. It wouldn’t be a stretch, in fact, to call some of them allies. Like the government of Switzerland, Estonia, England before this Brexit mess, and in our view even the Trump administration.
Central bankers and commercial bankers are however very powerful. They bankrupted New York and somehow they got their own lawyer to be chief of SEC at a very crucial time.
A SEC that probably can’t keep up and now risks irrelevance for innovation does move, and does move far quicker than any bureaucracy.
“We are not going to innovate for you” has now received the response of you were never asked to innovate for us, but for yourself. You can keep riding horse carriages under a government where only the rich can vote as it was largely the case globally in 1933.
We’ll keep driving the move towards opening these artificial intelligence algorithms that now control much, towards bringing robots under public ownership through the token models, towards funding the advancement of mankind without fear, nor favor, and of course towards fun.
Copyrights Trustnodes.com