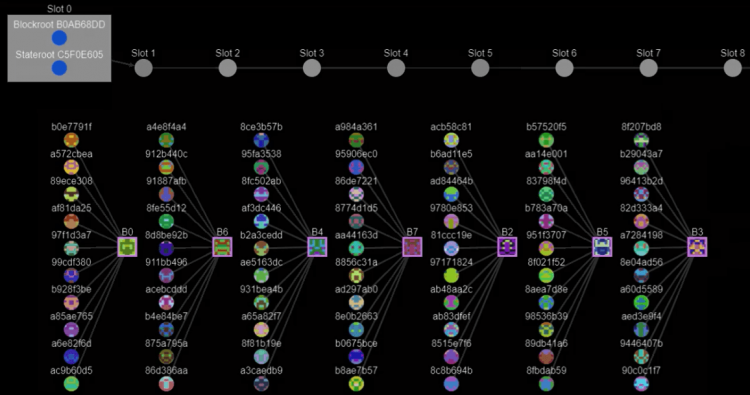 The ethereum 2.0 development teams have managed to keep to their target of a Proof of Stake (PoS) testnet launch this March with Nimbus announcing on Thursday the PoS Beacon chain single client testnet is now out. They say:
“We have a Nimbus-to-Nimbus testnet running, not just in a simulation on a single machine, but with a remote bootstrap node and people connecting to it – even from outside of Status!
This is a major milestone in the development of Ethereum 2.0, and while stability issues persist and bugs will happen, the fact that we now have a Beacon chain synchronizing across nodes that aren’t necessarily local to each other is a big deal.
We’ve named it testnet0 – this is the first in a series of testnets that will follow, each adding new features, scale and stability. During the first weeks, testnet0 will be frequently restarted to incorporate what we learn from feedback and monitoring.
This iteration is based on spec version 0.5.1 and uses 400 validators to secure the network, of which 50 are reserved for brave explorers – when you join us, you’ll get one randomly assigned to you.”
They then detail how you can join the testnet, with Nimbus being an ethereum 2.0 implementation client, similar to Geth or other eth 1.0 node clients.
It is maintained by Status, one of – if not the – biggest ethereum dapp by the number of developers and coding activity:


This is the first step in ethereum’s biggest upgrade since the network launched close to four years ago.
Individuals across the world can now join the testnet and basically run the Beacon chain in a lab like environment to test and see whether it does what it is meant to do and, if not, fix any bug that comes up.
A cross-clients testnet is to then follow. There are numerous such clients, with Sigma Prime’s Lighthouse eth2.0 client and Status’ Nimbus seemingly being furthest ahead.
Nimbus has now beaten Lighthouse to it, with Prysmatic another “runner up” as well as others. Then there will be audits, and then the big launch.

Phase 0 is the Beacon chain. Phase 1 is storage sharding if we can call it that. Autumn for storage sharding spec freeze, sort of the skeleton now “unchangeable,” seems to suggest they’re moving quite a bit faster than expected.
If we follow that timeline, then presumably phase 1 goes out during winter, with the gigantic phase 2, or “full” sharding, perhaps out later next year.
Phase 2 will considerably increase ethereum’s capacity. While phase 0 provides ethereum with a return on investment by putting your eth in a “savings account” or by giving it to Coinbase to do that for you.
It is effectively replacing miners with token holders. Right now, giant industrial farms vote within the rules of the code on what is the “true” history of transactions and thus who owns what. The Beacon replaces that with 32eth accounts voting for effectively the same thing so rather than proving you’re a real person and thus non sybilable by solving useless maths equations, you do so by showing 32eth.
The Proof of Work (PoW) chain will continue operating for some time in parallel with the PoS chain. PoW, however, will be less important to security so block rewards will reduce considerably to 0.6 eth per block.
The stakers in addition will get ◊0.22, so eth will effectively have a halving+ this Autumn if progress continues at the same pace or faster.
Copyrights Trustnodes.com