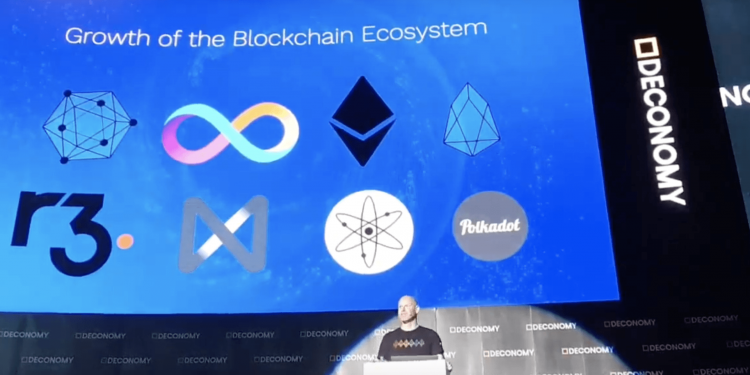 Joseph Lubin, founder of ConsenSys and one of the original co-founders of ethereum, has given a powerful speech at Deconomy where he lays out a vision for ethereum as a global settlement layer that brings down all the walled gardens. We quote at length:
“Reliance on centralized trust enables certain kind of intermediaries to extract too much value from a transaction… the trust revolution will transform everything.
The trust characteristic of blockchain derive from their degree of decentralization. Certain blockchain networks can’t be improperly manipulated, can’t be cheated even if up to half the nodes are malicious…
Settlement is the act of finalizing a trade or transaction. In stocks or equity trading, settlements between clients of a brokerage can happen at the level of the brokerage, while other kinds of settlement may need to happen at the base layer.
Around the world, these base layers are called centralized depositories. In this country, it is the Korea Securities Depository.
There doesn’t actually exist a global, coherent financial system. It is a network of walled gardens. Brokerages that serve their jurisdictions, central depositories for each nation, and banks that handle their business nationally and reach out through their correspondent banking relationships when they need to cross out to another walled garden to complete a transaction.
Settlements of sorts happen on all kinds of platforms beyond the financial industry. Ebay, PayPal, MasterCard, Amazon, can be considered settlement platforms for certain kinds of transactions. Google Play and the App Store can also be considered settlement platforms. Travel websites… are still others.
None of these focus primarily on the benefits to the consumer and many of these play disturbing games with their customers to reap maximum value out of us.
Each of these prioritize protecting their pricing power, limiting freedom, choice…
Legacy economy is all about creating the deepest, widest moats to protect competitive businesses.
Service providers, like software and game developers, doctors, musicians, teachers, and Uber drivers, also suffer from platform capture in their different industries.
Software developers have had to deal with various platforms over decades: AOL, CompuServe, Windows, Mac, the open web with browser compatibility headaches, shrink wrap stores like… egghead and now the walled garden web: iOS, various Android systems, Facebook, the App Store and Google Play.
Throughout history you’ve had to pay some piper to get your work in the hands of users. It is a breath of fresh air that currently on some blockchain platforms a developer can permissionlessly deploy or use software in seconds for pennies any time she wants.


In the gaming space, the platform upon which games have to live, their settlement layer so to speak, has always been proprietary, leaving game studios very vulnerable.
From the console wars where platforms rose and fell in dominance, to Facebook pulling the rug out on game developers by changing the economics and data access on the platform, to App stores playing the same powerful intermediary role today.
Ethereum currently enables a dev studio to bring their own scalability solutions, like Loom or Axie Infinity, and anchor it onto ethereum: a platform that nobody and everybody owns…
Assuming we agree that freedom, choice, and maximal trust are a good thing, what would be the optimal choice for a global settlement layer on which we can architect our industries and collective endeavors?

Perhaps IBM’s Fabric? Nope, there is no chance in my opinion that will be evolving beyond relatively small networks for private and permissioned systems.
Fabric can issue tokens, but only for narrowly circumscribed situations. The Fabric technology promotes platform locking.
R3’s Corda is blockchain inspired software for mostly banking industry applications. It is more about point to point trust, than a shared source of truth.
Corda can issue tokens, but only for narrowly circumscribed situations and Corda as a technology promotes platform locking.
How about EOS? As has been debated endlessly, a platform controlled by 21 crypto bros is just not all that decentralized.
They can collude and censor if they wish. Governments and other well resourced actor can bribe them or force them to act against their will and against the well being and the security of the people using the platform.
It has been argued that if these Block Producers start behaving badly, they will be voted out and that is the main source of decentralization in the system.
Unfortunately there is no good way for anyone to detect they are colluding or have been corrupted or forced into some sort of improper action.
I can imagine EOS being used for some games, but not even games that have high value tokens. It is too easy to organize to steal value on this platform.
The Polkadot system is being built by Parity, the developers of Parity Ethereum client. Parity is a very strong team.
Polkadot will achieve scalability by having one main heartbeat chain, the Relay Chain, with multiple parachains hanging off it. Polkadot is scheduled to launch its Relay Chain mechanism in Q3 2019.
The Polkadot worldview sees ethereum connected as a potential virtual parachain via a bridge.
For any parachain to become attached to the Polkadot Relay Chain, it must be voted in by the holders of dots, the Polkadot system token.
These voters can also choose to pause a parachain, or remove a parachain from the system if it’s deemed to be out of compliance with what the majority prefers.
Effectively this is a permissioned system and whitelisting and blacklisting of entire parachain networks is a core tenet of the governance system of Polkadot.
One can imagine a parachain choosing to be permissionless in allowing anyone to upload a dapp, but ultimately the dot holders might take issue with this as they might be considered by authorities to be responsible. So it would probably be too dangerous of a policy for a parachain to offer.
It is likely that this will be a permissioned and a highly controlled blockchain platform.
Cosmos also has a solid team of technologists. Cosmos doesn’t really propose a base trust layer, it seems more focused on enabling different sovereign platforms to interoperate side by side and it doesn’t appear there will be much interoperation between platforms in the next few years beyond enabling tokens to move back and forth across network boundaries.
The Cosmos team feels this will the the main and most important interoperation use case. I expect Cosmos to have good utility as a Layer 2 solution, linked into the base trust layer when necessary. Cosmos also expects to interop with ethereum through a token bridge.
Dfinity has a very strong team. Because dfinity is a currently closed system controlled by a small number of investors and token holders – though they’ve indicated they will open source their project at some point – it is hard to tell, but it appears to me they are less interested in being a global base trust and settlement layer and more like a somewhat decentralized AWS replacement.
They’re likely to do a very good job of this whenever it gets released.
Ultimately, it doesn’t seem viable for Dfinity to be a base trust layer for the planet as there is one fundamental design choice that they and Cosmos made that will prohibit this.
Both Dfinity and Cosmos favor safety or consistency over availability and liveness. This means that if 34% of the nodes on their networks find themselves on the wrong side of some great firewall that blocks traffic for a period, their entire global network will halt, freezing every system built on it.
And there are other known related failure modes. This is a non starter for many different classes of application.
So in my admittedly somewhat biased opinion, there is only one currently viable option for the trust layer, the global settlement layer for the planet… Ethereum.”
Copyrights Trustnodes.com