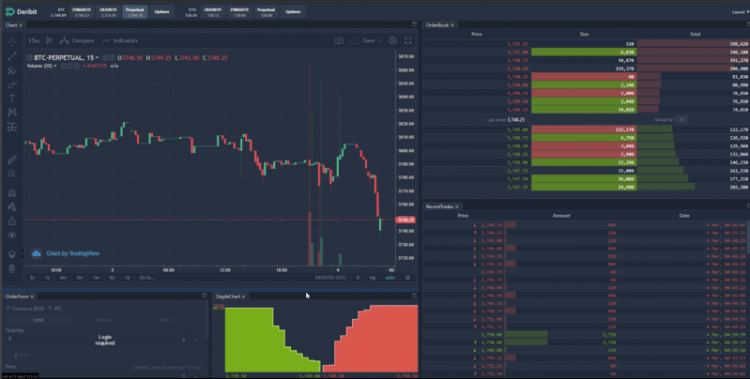 Degenerate gamblers can now go full hopium and lose their shirt or finally get their silly lambo following the sudden rise of a new crypto exchange that has become the very first to offer options.
Deribit, an Amsterdam based crypto exchange which has been operating since 2016, now allows you to trade bitcoin or eth options, as well as futures.
You need eth to trade eth options, or bitcoin to trade bitcoin options. You can’t trade ETH/USD with bitcoin, nor BTC/USD with eth. Why? – we asked Marius Jansen, the COO of Deribit. He says:
“That would be something we like to add, but it’s not the way Deribit is built. It needs an extra settelement. A spot exchange may be needed for that.”
The explainer page for options says they use the Deribit ETH index, which is composed of the spot price at Bitfinex, Gemini, Bitstamp, GDAX, Kraken and Itbit.
These are cash settled options in as far as you receive the difference of winning and losses, rather than the actual assets.
No cash exchanges hands, however. Only eth or bitcoin can be deposited and withdrawn from the exchange.


Options as you may know give you the right to buy something, but not the obligation. So someone can offer say the option to buy 1 eth at the price of $200 with the right to do so expiring on the 1st of May.
For this right, you pay say 0.1 eth, an amount you will lose regardless of what happens. So if the current price of $180 goes to $150, then you lost $18 rather than $30. If price goes up to say $400, you made $200, minus what at that point would be $40, so $160.
The huge power of options can thus be seen. From $18 you made $160 in this scenario. Obviously if you had bet $180, then you would have made $1,600 or lost $180 if price went against you.
That means options can be quite dangerous, especially if you’re the one offering the option. The buyer, in the above scenario, limits his loss to this $18. The seller, however, can effectively have unlimited losses. If eth crazingly jumps to $1,000 for example, something bitcoin is known to do not that rarely, then the offeror of the option might not be able to even afford ramen.

That's the power of options.🚀 pic.twitter.com/8Fdpw46TT4

For the non-degenerates, the benefits of options are their potential to reduce volatility. Because there are now other financial layers on top of bitcoin or eth – derivatives – then there would presumably be quite a bit of hedging at the spot price level, thus increased liquidity and volumes.
That could reduce volatility, but not that much. Stocks do sometime crash 70% as well, in addition to adding about $2 trillion in the past week.
When even stocks still remain quite volatile despite trillions moving, bitcoin and cryptos in general are quite small fish by comparison and thus likely to remains very volatile with or without options.

Last night around 01:00 AM UTC we experienced some extraordinary volume. A market maker had issues with a trading algorithm, causing more than 50,000 BTC (~ 200,000,000 USD) volume on 27 Sep 2019 future. Here is an example of some trades during this period. pic.twitter.com/HDuI10Rz5j

No one had heard of this exchange until recently when suddenly everyone started talking about it. What gave rise to this popularity? – we asked Jansen.
A combination of things, he says. “Well performing platform with no overload issues. Only bitcoin options exchange available for the public. Liquidity in the books has improved over time as well.”
In three years of operations there have been “zero socialized losses, zero hacks and zero auto deleveraging of positions,” Jansen says.
Bitmex has been accused of being biased against ethereum, while Deribit’s eth settled options and futures suggest they might like eth. Is that the case, we asked Jansen, or are you neutral?
“As an exhchange we are neutral. We’ll let the market decide. Our employees might have personal preferences, but as an exchange we don’t care too much,” Jansen says.
Anything you want to say to Arthur Hayes, the BitMex CEO, we semi-jokingly asked.
“Nothing in particular. I would rather want to say to his customers: come trade with us.”
Why, was the obvious question. What does Deribit offer over BitMex? He says:
“No system overload issues. We’re processing 10,000+ req/s on our exchange with 1200+ matching engine requests/s during last moves. And without overload issues.
So a trader can always exit his position or enter a position. Even during highly volatile periods.”
BitMex has become notorious for giving a system overload error during volatile periods.
Shehzad Hassam, a crypto trader who used to work at BitMex and is now in talks to be hired by Deribit, says Deribit is a “fantastic exchange. Huge potential to be number one. Great ecosystem for crypto. Very different to BitMEX, but the company is the only options platform around. And they have so many things that other exchanges do not.”
They’re an unregulated exchange as far as we are aware, but their top personnel is known.
Are you doing the Silicon Valley thing of asking for forgiveness rather than permission, we asked Jansen who wouldn’t be drawn into the regulatory matters. Apparently he had a call to attend to.
“USA, North Korea, Netherlands and Quebec are all restricted,” we’re told. What happens if one of them sneaks in and you find out, we asked Jansen. “That’s already explained in our Terms of Service,” he said.
Would the funds be returned, we asked. “Of course we would return the funds,” Jansen said.
It’s the old game of outdated laws and new advancements. Deribit in its entirety does not in any way touch fiat. SEC or CFTC in USA has not yet green-lighted one regulated margins platform, let alone options, but they did give futures to Wall Street’s CME which in contrast is 100% fiat.
Europe is more accommodating, green-lighting Kraken crypto settled futures, with Deribit now launching the first crypto options.
Copyrights Trustnodes.com