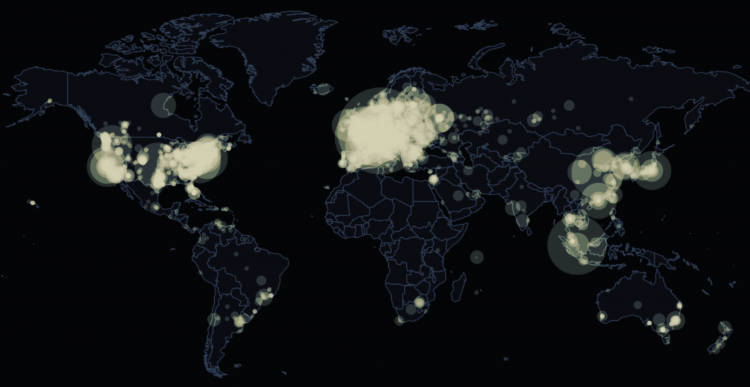 Germany now accounts for 20% of all publicly reachable bitcoin nodes, not far off from all of the United States which has the biggest concentration of bitcoin nodes at 25%.

America is of course quite a big country and is where bitcoin first took off, so its number one position is not surprising.

Germany being so close to potentially even taking number one spot, however, is quite something.

Nor is this just for bitcoin. Ethereum too tells kind of the same story, although to a lesser extent.

There are two conflicting stats for eth, both of which have USA as number one for publicly reachable nodes.

Ethernodes says there are 3,000 such nodes in USA, while Etherscan says there are 2,000. Ethernodes then has China in second position with 1,200 nodes, while Germany is way down with about 400.

While on Etherscan Germany is second with about 1,000 nodes and China third with 800.

Ethernodes is a bit old and the nodes map doesn’t seem to be working very well, so perhaps it isn’t being maintained. Suggesting that Etherscan stats are maybe more correct.

Regardless, the prevalence of Germany especially for bitcoin nodes is very curious just as is the near absence of China even though most of the mining is there, or at least was prior to some recent regulatory pressure.

Miners however would probably configure their nodes to not be publicly reachable, so China is not surprising. While Germany tells a story.

If we take nodes as a proxy for devs, coders, techies or even business usage, then it does appear Germany is a very big hot spot.

The reason might be because Berlin has quietly risen as a centre for semi-dissenters. While Snowden for example went to Russia and Assange until recently was stuck in a London embassy, lesser trouble makers probably head to Berlin.

It is there where the Chaos Computer Club (CCC), one of the world’s largest association of hackers, is based. Some of the Tor guys hang out in Berlinas. Quite a few eth projects have HQs there and even more in Zug, which is not far off from Berlin.

Their history has made Germany one of the most open, tolerant, privacy-upholding, and welcoming country.

It is the only one that can really stand up to USA if it wanted to and its near merger with France makes Germany and Europe a powerhouse once more.

Their focus on upholding fundamental rights and their jitteriness of any appearance of statsi like apparatuses has seemingly made Berlin an unlikely refuge for code warriors.

This harboring of semi-dissenters has not always been without tension. There have been raids now and then, but generally German authorities leave them alone.

That’s a very wise choice because many of them are incredibly smart men and women who can do three digits math multiplications in seconds – although the two digit ones are more common.

Accommodating them and perhaps even facilitating them might thus be an historic strategic choice which may finally allow tech giants to rise in Europe too.

This concentration of bitcoin nodes, therefore, is perhaps not too surprising in this context, but it being close to overtaking even USA is quite a way of putting Germany on the crypto map.