Is Karl Marx’s Prediction Coming True With the Rise of the Modern Monetary Theory? 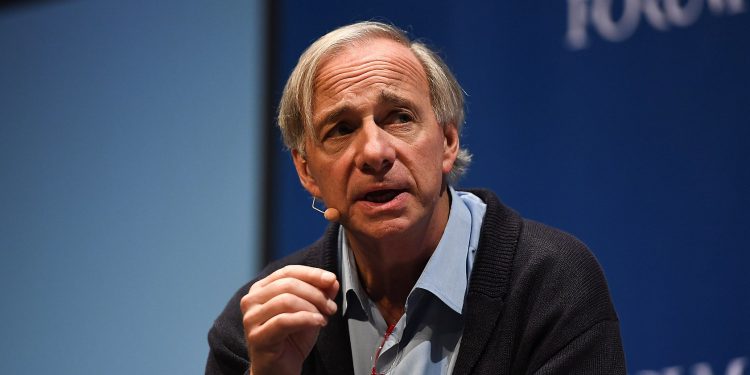 The billionaire just gave backing to a controversial idea: putting the government back in charge of money printing.

More radically, he is proposing giving the government levers to the point of it amounting to a command economy. Dalio says:

“Imagine instead if you had taxes operating in a swing way, the same way that interest rates move, so that it could be a semi-automatic stabilizer.

If you had a recession you would have the equivalent automatic reduction in taxes. On the opposite end, a tightening would result in a rise in taxes.”

He is basically saying that instead of borrowing money, the government should just print it. Taxes are then used to effectively destroy this printed money.

Currently the government funds its operations through taxes and also borrows through bonds which pay interest. In this way, the government itself does not create or destroy money, banks do. Both the central bank and commercial banks.

He is suggesting this power of banks to create money should be taken away from them and should be given to the elected.

He recommends a fixed 0% interest rate. Money would then enter circulation not by borrowing or lending, but by government spending.

That part is interesting because interest charged on printed money out of nothing is inherently unfair. It is a tax on production and growth, and since it is printed from nothing, it is a common good. Thus people must have a say over it.

The problem is that taxes are a visible thing on your paycheck. Inflation isn’t, until it is too late. Moreover, since the money is printed first, and then how much is too much is analyzed much later, it is far too easy for all of this to get way out of hand.

Equally importantly, the government would have immense power over the economy to the point where it could get very close to outright communism.

They already have schemes to help first home buyers and you can argue the government here would be accountable, while banks are not.

Currently, for example, to buy an ordinary house in London which costs circa $400,000, you need to earn $100,000 a year as banks lend 4x your earnings. Very, very, few people earn such money.

What is extremely curious, however, is that the mortgage installments on this $400,000 are less than what someone earning $20,000 a year pays on rent.

The mortgage lending system, therefore, is very unfair with the government able to compete with banks if it wished to and in the process it would probably even make money.

If there’s a government monopoly, however, it might cause problems because all housing would effectively be social housing and we all know what the soviet blocks look like.

That’s one example to show the considerable, and at times total, influence the government would have over the economy. Yet the above example also shows why this theory is being proposed at all.

The system is broken. We all know so. Wealth concentration has now reached aristocratic levels. Legal restrictions over start-up funding makes entrepreneurship a very risky business. The privatization of money printing in a banking monopoly has the younger generation barely making ends meet.

Most importantly perhaps, elections have limits. In some areas perhaps there should be more elections, like who should be the Fed chair or the SEC chair. But who is elected can often be determined by who is the richest or has the richest backers, making it all very close to an aristocracy with elections just for show.

What is very curious is that although the jury system does work and does work very well, it is hardly being used at all except for in the most rare instances in criminal courts.

If such sample of random people can decide facts in these most crucial cases, it isn’t very clear why a likewise sample doesn’t sit in a house of congress to there too decide facts and have say over policy.

A Citizens Assembly is not even a radical idea, more of common sense. Without it, it isn’t very clear what would constrain the government from favoring the rich in any way possible, at times by the force of law through investments prohibitions.

Were the government to have the power of spending as much as it likes, however, it isn’t clear whether even a Citizens Assembly would constrain the tendency to squander funds in as an inefficient way as possible.

What is interesting is that Dalio says the Modern Monetary Theory (MMT) is coming whether we like it or not. He says:

“Interest rates are now pinned near 0% in two of the three major reserve currencies (the euro and the yen) and there is a good chance that they will be pinned there in the third and most important reserve currency (the dollar) in the next economic downturn.

As a result, fiscal policy deficits that are monetized is the contemporary stimulation configuration of choice. That existed long before there was a concept called ‘Modern Monetary Theory,’ though MMT embraces it.”

Karl Marx, as you know, predicted that capitalism would create bigger and bigger booms and busts to the point it collapses and/or turns into communism.

Dalio is saying that’s happening, so let’s wear off pretenses and let’s embrace it. Let’s give the government all the printers and a commanding say over the economy.

The alternative view is of course that instead of the government or banks or a combination of the two printing money, anyone can print money.

Now this sounds silly, but it was proposed by Friedrich Hayek in the 70s in the Denationalization of Money because he too saw there would be a tendency to give more and more monetary power to the government.

He forcefully argued that if there is no free competition between different currencies within any nation, then there will be no free market.

That is common sense because if the government or Fed is deciding money, the valuer of all things, then they are effectively deciding over the entire market.

We know as much because if Fed prints, then stocks go up. What if, however, everyone was the Fed and instead of elections or a jury we can all just pick what Fed we like?

That’s arguably the intellectual foundation of bitcoin and cryptos more widely where economics are concerned.

Previously you couldn’t just print your own money because you’d be locked up. Digital code however allows one to remain anonymous with the bitcoin inventor still unknown.

There are now so many such digital code currencies, but this space is still very new and has some way to go to act as a real currency at scale.

Arguably thus, as far as this space is concerned, it doesn’t matter if it is gov or banks that print the money, as long as it is everyone else too.