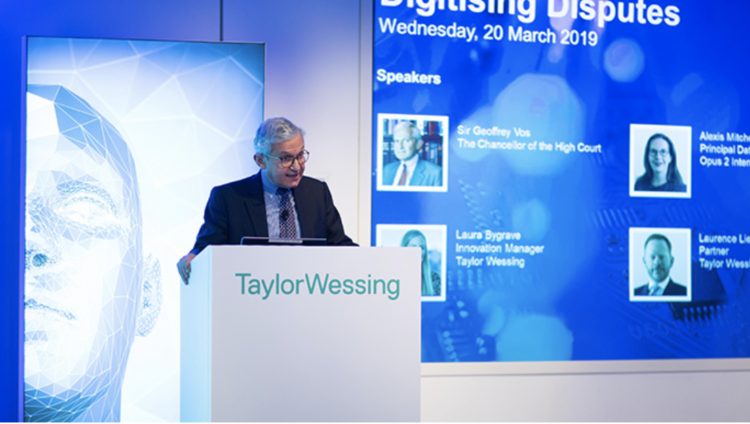 “We should be looking to identify and, if necessary, remove any fundamental legal impediment to the use of smart contracts.

We should try to avoid the creation of a new legal and regulatory regime that will discourage the use of new technologies rather than provide the foundation for them to flourish.”

So said Sir Geoffrey Vos (pictured), who sits at the court of appeal and is also the head of the Chancery Division of the High Court of Justice of England and Wales. So making him arguably the most senior judge in England where financial matters are concerned.

He gives an interesting definition of smart contracts as a “recording of a legal agreement between parties that is written in a language that is both human-intelligible and machine- readable, whose text incorporates an algorithm which automates some or all of the performance of the agreement.”

After considering whether cryptos are property, which he doesn’t answer but implies they obviously are, he lays out a very interesting question:

“Is a distributed ledger recording cryptoassets capable of amounting to a ‘register’ for the purposes of the Companies Act 2006 or the Uncertificated Securities Regulations 2001?”

In the time of horse carriages when they only had paper, shares were sold by giving a paper certificate to say something like Trustnodes has 3 shares of Companynodes plc.

To sell this share, you had to go back to the bank or issuer, give back the above certificate, and the buyer would get a new one saying Newnodes now has three shares.

This is still how it works, except now the paper share says Brokernodes has 1 million shares of Companynode. Everyone else then buys from the broker who keeps a database of buyers and sellers, with the latter never really seeing the paper certificate.

That obviously has many problems because the broker could easily be lying. To address that, there are all sorts of regulations requiring names and addresses of who bought what share for how much and so on.

The blockchain, of course, records all this information itself, so you don’t need a registry because it is on the blockchain.

Vos doesn’t say so as there’s a report coming soon from the UK Jurisdiction Taskforce (the “UKJT”) which he chairs. He says UKJT “was established with the objective of demonstrating that English law and UK jurisdiction can provide a state-of-the-art foundation for the development of DLT, smart contracts, artificial intelligence and associated technologies.”

The report will answer this question and others with the aim of updating the law to take account of new technologies with another very interesting question being:

“Is a smart legal contract between anonymous or pseudo-anonymous parties capable of giving rise to binding legal obligations?”

It is difficult to see why the answer would be no provided they can prove they have entered the contract by signing some private key or showing it in some other way through the blockchain.

That’s because one somewhat unique quality of smart contracts is that anyone can enter into it automatically. While a paper or other digital contracts are usually one to one, smart contracts can be one to many as you can just call a function and trigger the contract.

He said they need “to ensure that a smart legal contract composed wholly or partly of computer code is capable of constituting a valid and binding contract under English law.”

With the judge then stating that is indeed the case as he implies smart contracts are binding under English law, stating:

“It might give the market confidence if the legislature were to say expressly that a contract composed wholly or partly of computer code were capable of constituting a legally binding contract under English law, but I am far from certain that it is necessary to do so.”

That can have one important implication. Coders or companies can be held liable for misrepresenting what the smart contract code does. The judge says:

“Coders often like to think that no dispute resolution is required. They are wrong, because human beings and corporate entities managed by human beings are likely to be entering into smart legal contracts.

Such entities are capable of making representations and, therefore, misrepresentations, about the effect of a particular piece of computer code. Coders also need to realise that they themselves may quite genuinely make mistakes. We all can.”

The judge said the foundations have to be laid out as a matter of urgency. Once that is done, “I would expect English law and UK dispute resolution to prove a popular foundation for the trillions of smart legal contracts that we may then expect to be entered into annually.”

So suggesting smart contracts and ethereum – where most of them run – are now perhaps headed mainstream as this millennials old legal profession upgrades to meet the demands of a growing digital economy.