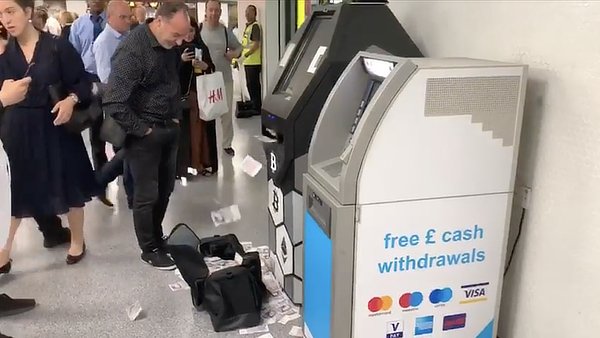 A bitcoin ATM in a shopping centre at Bond Street, London, has spewed out tons of cash with it unclear whether this was some sort of malfunction or a hack.

A man is seen in a video in front of a bag that is being filled with money as the unidentified man sweeps with his feet any pounds that are flying away.

This ATM is by a polish start-up that has chosen the highly professional name of shitcoins.club for their company.

They have numerous ATMs across UK, one in Scotland, a couple in London and 12 in total.

This ATM has previously drawn attention for going all weird last month in showing onscreen logs and even a test private key.

What appears to be a representative from the Shitcoins Club, said at the time from a now deleted account that their IT operators could not access the shopping centre during weekends, so they had to remote access. He or she also said:

“Our ATMs are the only ones in UK which can handle large cash withdrawals. On our website shitcoins.club on the ‘locations’ tab, you can find out exactly how much GBP ready to withdraw holds each of our ATMs.

The ATM at Bond Street Station (West One Shopping Centre), has at the moment 30,000 pounds which  can be withdrawn immediately, in exchange for BTC, LTC or DASH. Our ATMs are usually toped up to 20 000 pounds.

The amount of fiat currency available to be paid out can also be found on the ATM’s main screen.”

So it may well be someone is just withdrawing a bag of money under the initial impression that they may nicely come out in chunks, rather than one by one fly out.

Or, if it is not a now very embarrassed bitcoin casher, it may well be the IT team for this ATM has messed up somewhere as obviously the ATM shouldn’t have been showing that stuff on screen last month.

It could also obviously be a hack, but that does sound somewhat unlikely as this is clearly a very public place.

If we have to guess we’ll go with a somewhat amateur team that has now given us a bit of entertainment and hopefully that’s all there is to it with the British public well behaving so they may have not lost much, if any, money.