Google Shakes Up News Industry, CCN is Out, Daily Mail Down 50% 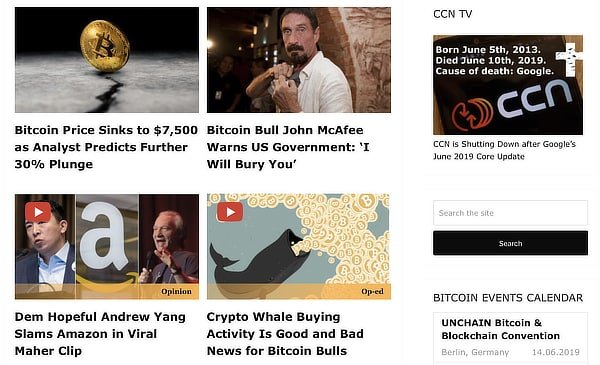 A core update to Google’s ranking algorithm has contributed to the shutdown of one of the oldest crypto media which in the past few months focused more on politics.

“Google’s June 2019 Core Update rolled out on June 3th 2019 and CCN’s traffic from Google searches dropped more than 71% on mobile overnight,” Jonas Borchgrevink, CCN’s founder said, adding: “Our daily revenue is down by more than 90%.”

Meaning this site, which has been running since 2013, was heavily reliant on Google traffic, expanding to 60 employees.

“We do not want to downsize the team, we do not want to break the morale of the team. So yes, this change by Google is directly having a significant impact on us,” Borchgrevink said.

The Daily Mail has also seen a drop of circa 50% with the Daily Mail’s SEO Director Jesus Mendez going to the Webmaster’s forum to ask why they saw a 50% drop of its traffic and a 90% drop in Google Discover feed.

Little help could be provided because Google now uses machine learning and states that these updates are to make search results more relevant.

The above from last year was cited by Google last Monday when they somewhat uncharacteristically announced the rollout:

Some suggest this update is trying to address clickbait, but the Google algorithm is incredibly complex, taking into account an unimaginable amount of data.

Based on such data it eventually figures out what site might be under-ranked and what site is perhaps being given far too much visibility.

Then all this “knowledge” is rolled out in an update after presumably some testing which appears to have been ongoing for much of this year.

Picking Winners and Losers, or Just Improving its Product?

For some time now it has looked like nothing was improving at Google, with its search results at time appearing spammy as the company seemed to focus more on non core products such as driverless cars or Google glass.

Google search, however, started becoming at times almost unusable with some search queries needing many tweaking and retries, from which the algo presumably learns.

Understandably, those affected by this update may be unhappy, but it is quite astonishing the Daily Mail has an SEO director, meaning presumably they have an entire department just for SEO.

Obviously it is not for us to say whether they did or did not play Google’s algorithm, but the importance of Google traffic to them appears very clear for the director presumably did wonder what his posting would look like, and yet still did publicly ask.

Search, in a way, is a zero sum game. Ranking unduly above others can in some ways be considered theft. Now Google is not saying there was such thing here and we are not saying so, but the search engine does have immense power.

Let’s say for example there’s a paper that mixes sensationalism with scapegoating and perhaps even nationalism. Let’s assume this paper hires some SEO experts that manage to get it to unduly rank above other papers. Let us then say that perhaps primarily due to Google traffic, this paper starts being considered as the most read paper. Let us then say this leads others to think there is perhaps more support for something than perceived, so the BBC, for example, starts taking the agenda from this paper. Finally let us say that this leads to a constitutional crisis.

No one can know the above for sure, but Google has immense responsibility which arguably, until perhaps recently, they have neglected.

Google News, for example, includes literally bot written articles. In some cases it includes articles copied word by word from Trustnodes, but it doesn’t include Trustnodes itself. Why? Well, they’re famous for “no customer services” so it’s not clear.

It’s not our job to engage in any SEO or abide by any rule they have as things like whether we name authors, for example, are completely our business not Google’s.

They apparently made $4.7 billion from news sites in 2018. That’s almost as much as the entire US based news media made in revenue last year.

This claim is disputed, but it goes to show just how much Google is making from content producers and how little, in many cases, it gives back to them even through things like doing their job properly.

And it is a very tough job, especially when you have SEO “experts” trying to game it, but Google should be doing a lot more as they have neglected search for a long time and that may have well had consequences for democracy itself.