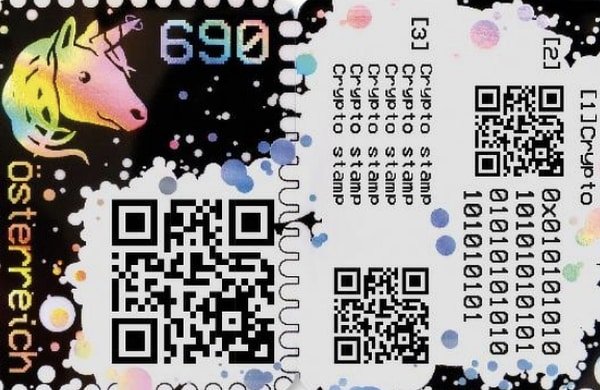 Christmas has come early for collectors who have been rushing to get their hands on what may be the rarest stamp of all, 1,500 red ones issued by Austria’s post office with 0.001666666 ETH contained in each of them.

“Austrian Post is offering for the first time a stamp which is also stored as a digital image in the Ethereum Blockchain. This guarantees complete traceability for all former owners of the stamp or their digital image,” they say.

We could not even find the red one on its own on eBay. The post office offered crypto stamps have sold out. Some offers on eBay have sold out, with this being an actual stamp. You can send letters with it.

It’s also an actual wallet. You can probably see the private key above in the featured image. Out of package, that’s covered with a scratch surface. Making this basically a very rare eth paper wallet.

As you can see, these are unique tokens, each having their own ID and each being “different” and identifiable as unique.

The distribution here is significantly widespread, with more than 150,000 transactions having taken place so far.

If you’re lucky to have gotten your hands on one of these ethereum wallet stamps, then you just scan the QR code to see what color as physically they all look the same like in the featured image above.

If you want to transfer it, then you’ll have to scratch for the private key. If you want to use it as a collectable, however, you’d probably want to leave it unscratched and maybe even leave it in the original packaging exactly as it came.

Because the red one in particular, but also the yellow one, is so limited in amount and – as not just the first edition, but as a world first – it kind of ticks all boxes for collectibles.

With all this so being Austria’s homage to ethereum, cryptos and the blockchain. A perfect world first edition.