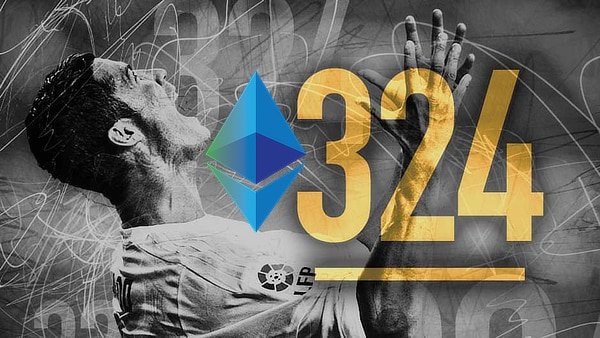 Ethereum for once has risen more than any other crypto, up circa 10% to about $290 at the time of writing.

That’s on significant unfiltered volumes of $8.6 billion, one of the highest level it has ever seen.

As you can imagine, everyone is wondering whether it will cross $300, one of eth’s biggest resistance.

“Experts” however are focused on $324 because meme and because if that is crossed, the road may be very clear:

Last time eth was in a rising formation at this level in 2017, it sidewayed and sidewayed and then one green candle sent it straight through $324 and to $370. The week after it went to $500.

The past doesn’t necessarily predict the future, but ethereum transactions are nearing one million.

That’s without most of them being due to a CryptoKitties mania that was going viral. Instead it’s “normal” usage.

In addition, what’s similar to last time’s $324 is the fact ethereum has had a thirdnin. That being new supply has been reduced by 33%, just as it was in or around October 2017.

Thus, even though the price has been rising, hashrate hasn’t, suggesting eth miners are still strugling to meet their costs

In about seven months, ethereum’s new supply will be reduced even further in a halvening++ as Proof of Stake is planned for launch, reducing new supply from 2 eth per block to 0.82 eth.

Bitcoin will then have its own halvening in May next year, while for BCH it will be in April, making the top three cryptos with a unique selling point even more scarce.

In addition, eth had extra sell pressure last year from ICOs, in particular EOS, but that’s sort of over now.

So ethereum is rising, but for now it does look like bitcoin is still driving the show. When eth will take the stage, remains to be seen.