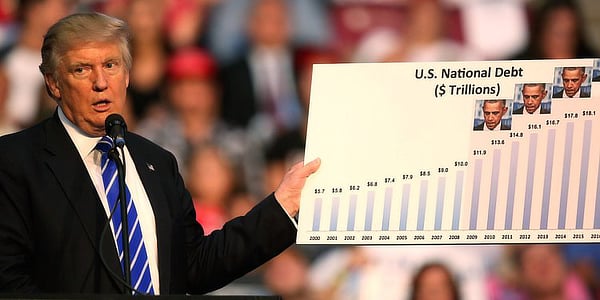 Donald Trump, the president of the United States has increased pressure on the Federal Reserve not only to cut interest rates, but to turn on the presses.

“China and Europe playing big currency manipulation game and pumping money into their system in order to compete with USA. We should MATCH,” Trump (or whoever runs his Twitter account) said with the emphasis his.

Trump is arguing that not only China, but Europe too is playing some sort of currency manipulation game which America should join in his view.

That means he thinks the dollar should be devalued in the expectation of increasing demand for American goods, but this narrow mercantilist view misses the far bigger picture.

So says the Trump twitter account while focusing on only the yearly growth of GDP at about 3.2%.

Such growth should be at least 4% because that’s how much of the GDP the government is borrowing, and thus extra spending a year, at circa $900 billion for 2019.

Trump takes in taxes about $3.5 trillion and spends $4.4 trillion according to the latest figures.

Above we can see what the government spent your taxes on last year. Pensions and health get about half of all taxes. Of what’s left, there’s some benefits like unemployment compensation and veteran’s benefits in the “Other.” We further have $325 billion in debt interest payments mainly to bankers and rich people.

We now get to the more interesting part. Trump said military expenditure is to increase to $719 billion. We’re then left with $640 billion for everything else like education, NASA, paving roads, maintaining the non existent rail system, ports, airports, collapsing dams, and so on.

If you’re spending about one trillion more than you’re taking in taxes, naturally there will be some growth. That the growth doesn’t correspond to this extra spending, however, is a bit interesting as it suggests either some sort of corruption or far more likely incompetence in that the money is perhaps not being spent wisely.

The Military and the Alternatives

The United States has 165,000 military personnel outside of its borders. That’s about 10% of its total military. If we thus guess $70 billion is spent on them, this is money going out of the US economy to other economies.

There’s of course benefits that come with these bases, but $70 billion is not far off from what USA spends on its entire education budget.

There are a lot of better ways this money can be spent in a way the government would benefit the economy in a way only a government can.

Considering for example that clean air and a clean environment is likely to decrease medicaid and medicare costs due to less killer polluters, just a third of the military budget for one year, so about $200 billion, can solar roof almost every house in the United States, securing energy for 20 years.

America in the process would take out of dirty coal mines all those men who may well be costing so much in healthcare, and out there in clean air enjoying far nicer, better, solar jobs.

The need for maintenance and so on, in addition to the production of these solar panels, may well create more jobs than the entire army or the entire current energy industry.

These jobs would further pay dividends in an all around healthier country with more intelligent citizens due to cleaner air, who thus can be more innovative, dynamic and so on, meaning who pay more taxes in total.

That’s one example where borrowing can make sense, as a long term investment, but borrowing to just pay expenses clearly leads to wasted value as this one trillion is not being fully reflected.

Perhaps for us right now it doesn’t matter because we’re not yet asked to pay what we’re borrowing from the future, but our children will have to work twice as hard and that can have a spiraling effect.

America is buying from the world more than it sells by about $50 billion a month, creating an account deficit of 2.5% of GDP.

Just how correct this measure is remains unclear as it wouldn’t be easy to account for say an American freelancer who sells digital art to non-Americans.

Yet it is a measure and it’s what Trump focuses on regarding this currency manipulation claim.

Why he includes Europe on the mix when the euro has been rising against the dollar is not clear, but focusing on China, Trading Economics says:

“The politically sensitive goods trade deficit with China increased 12.2 percent to USD 30.2 billion despite the recent increase in import tariffs on Chinese goods.”

There perhaps isn’t enough data so far to conclude much, but tariffs may have failed presuming their aim was to sort out this deficit.

Trump may argue they have failed because China has devalued their currency by roughly the same amount as the tariffs, so cancelling them out.

Perhaps. However this is all a bit superficial. They’re basically playing with abstract human created units of measurements that do not necessarily change reality, they’re meant to reflect it.

China accounts for some 60% of the deficit and the main import is electronics. That being computers, laptops, phones, etc.

There’s naturally considerable demand for these in many cases necessary goods, and such demand might not be very liquid. People need a laptop to work, for example.

If America is not producing laptops, then America has no choice but to buy them from China. For America to produce laptops, they will have to not produce something else, say solar panels, because human capital is limited.

Hence countries tend to specialize in what they do well, just as labour does. America can do very well in innovation if they remove a ton of strangling red tape where even kids now need a license to sell lemonade.

Moreover to build such laptops in US there would need to be considerable upfront investment in robotic manufacturing because American labour is very expensive.

The government can assist in such upfront investment, and perhaps it would be able to if they’re not spending all this money on interest payments to bankers, pensions to some wealthy individuals, very expensive medicine due to some monopolistic practices and of course if they were not spending it on war.

America is spending more than Europe on research and development, but if their strength is innovation, it should be far higher than 2.8% of GDP.

Trump however is increasing military spending even as hopefully the major wars are now over. From that there should be some sort of peace dividend, but Trump says we hope to never use the bigger, stronger, army, and by having it, it is more likely that America won’t need to.

This is an approach to intra-national relations as if someone is talking to their friends because the opposite may well happen. If you strengthen your army, then others will have to keep up, meaning you strengthen it more, effectively until some general says we have all these toys, why don’t we play.

Security is paramount, but there can be such a thing as too much security with other things important too, such as not going bankrupt.

While there are plenty of things that can be done to actually strengthen the economy and make it far more dynamic, usually they are somewhat complicated things or require considerable upfront investments, with it all taking years to just get off the ground.

To change the Securities Act, for example, so as to allow more startups and thus more innovation, they’d probably want to undertake some sort of study, and then reports, and then consultation, and then debate and then finally a vote.

Yet we are learning that the elected are actually in charge, do actually have power and do decide just what gets done and how.

As far as Trump is concerned, he has completely ignored the economy so far except in “gimmicky” ways of cutting taxes which is something a baby can do.

Instead of coming up with some sort of vision or some sort of plan to get the economy really moving rather than by fake methods of government overspending, he is hoping to get FED to play with the unit of account measurement.

Fed has actually been “burning” money, some $600 billion since last year. So Trump may have a point in calling them out a bit as they may have gone too fast, but that might partly be to counteract the dollar’s devaluation due to the stupendous amount of borrowing.

The value of a money does of course in part depend on whether the government can pay back their debt.

With just interest payments now nearing half a trillion, there’s a significant wealth distribution from the taxpayer to mainly bankers or very rich people or foreign governments like China.

That’s a stealth tax without accounting for the actual taxes that presumably at some point would have to go up to pay for all this debt, with such taxes rising either explicitly or by just printing more money.

Meaning Trump hasn’t done as much on the economy as you might have expected due to his pledges of reducing regulations with his administration seemingly outmaneuvered on tariffs and with the government appearing to not quite have a plan on the economy, hence perhaps his focus on manipulating money.

It is sort of election season though, so we may well hear what he plans for his second term with the economy likely to be the top concern for voters.