Trump Comes Out Against Bitcoin 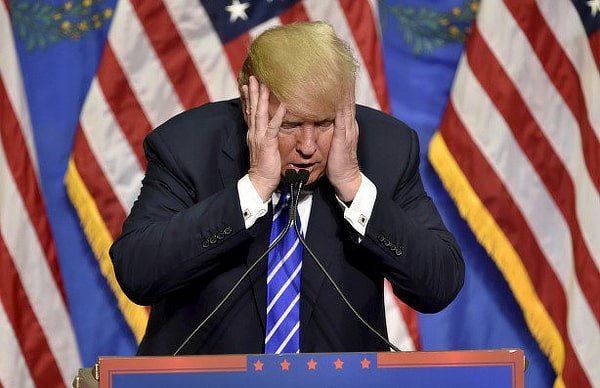 The President of the United States, Donald John Trump, has surprised much of his base with what may well be his biggest blunder since he entered the whitehouse.

“I am not a fan of Bitcoin” are five words few thought they would hear from Trump, the man his base claims loves freedom.

Nor is he a fan of “other Cryptocurrencies,” he said, “which are not money, and whose value is highly volatile and based on thin air.”

With that, an earthquake has met Trumpianism. “Feelsbadman” says someone nicknamed 420MAGA 1776. “Wrong” says another. “I’m not mad, I’m just disappointed,” says a third.

While they might not care about caged babies, this tweet may have shocked them to the core as the entire illusion of freedom loving Trump has been shattered.

“I am not a fan of Bitcoin and other Cryptocurrencies, which are not money, and whose value is highly volatile and based on thin air. Unregulated Crypto Assets can facilitate unlawful behavior, including drug trade and other illegal activity.

Similarly, Facebook Libra’s “virtual currency” will have little standing or dependability. If Facebook and other companies want to become a bank, they must seek a new Banking Charter and become subject to all Banking Regulations, just like other Banks, both National and International.

We have only one real currency in the USA, and it is stronger than ever, both dependable and reliable. It is by far the most dominant currency anywhere in the World, and it will always stay that way. It is called the United States Dollar!”

The United States Dollar is controlled by the Fed which Trump has been pressuring to devalue the world reserve currency.

As a single point of control, Trump may well like the ability to tell Fed what to do even though arguably no one can quite know what should be done considering the immense complexities that go into interest rates and the value of money.

In addition, as a property tycoon he’d probably rather people buy his homes than bitcoin or other investments.

His statement can however be seen as more aimed at Libra, but then why come out against bitcoin?

It may well be that he is far too old and far too busy to quite know what bitcoin is, but his statement does show a certain authoritarian streak which can be very worrying when it comes to a second term as then he would have little to look forward to, and thus little to constrain him.

Bitcoin and cryptos have made so many wealthy with startups raising billions in tokens, creating many jobs and allowing many to dream.

That Trump out of all would come out against it in such a public manner and so forcefully is surprising, but not too surprising.

He gave us Jay Clayton, the SEC chairman, who has been on a regulatory attack against cryptos since at least 2017.

Where classic liberals, libertarians and even conservatives are concerned, he has failed them on many counts except for hopefully ending the war in Syria and tax cuts.

Authoritarians, however, should be very pleased. He is spending close to a trillion on the army, a colossal waste of money which we hope will go to the drain rather than towards opening the doors of hell in Iran.

Where independents are concerned, his implied suggestion that NASA should cut spending may well sway them for NASA as an institution is generally loved.

With an election likely to be a very close race, the alienation of some of his base might turn America blue or might offer an opening of a more liberal conservative to challenge him in primaries to take advantage of what may be an authoritarian Trumpian bent.

Overall, this may turn out to be the third president to disappoint millennials who might now find it far more difficult to support him.