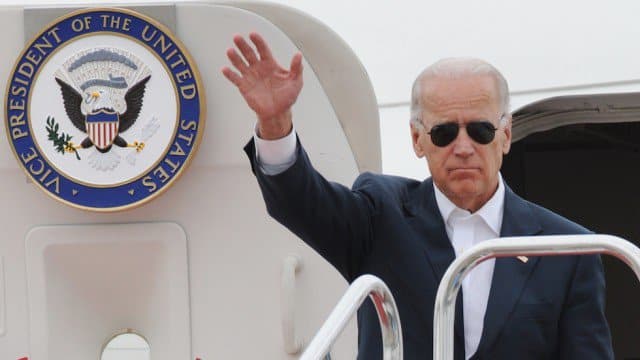 In a few months, Americans will engage in the largest democratic exercise in the western world when hundreds of millions are to choose their president and the leader of the free world.

It is likely to be the toughest contest since Donald Trump lost the popular vote in 2016, but still technically won.

It is easy to say this will be for Trump to lose, but a candidate is rising that when looked a bit closer may well lead many to think it is actually for Joe Biden to win.

Who is the former vice president that almost no one paid attention to, always in the background, and now a real contender and perhaps a likely winner of the presidency?

Biden was born at a time when the world was very dark indeed, on November 20, 1942, in the middle of the Second World War.

His parents have an English, French and Irish ancestry from a catholic family with his father working as a used cars salesman after an economic downturn led to the loss of a business run by Biden’s grandfather.

Making Biden a very middle class boy and quite an ordinary American who rose from the streets of Pennsylvania and up and up the rankings, through law school, the senate to Vice President and now maybe the presidency.

A lovely story of the American dream with Biden participating in an anti-segregation sit-in at a Wilmington theatre as a student, fighting for all to enjoy that American dream which was afforded to him.

Tragedy struck in the 70s when his first wife and one year old daughter died in a car accident. After some time of mourning, Biden “returned” to life and politics with the marriage of his second wife. Both are Roman Catholics and regularly attend Mass.

Making Biden a very ordinary American and his story, largely, a very American story. Even inspiring, in many ways, to rise from so low and up so high.

He is one of us. Not rich, not poor. Not a genius, nor stupid. Not hugely religious, nor irreligious, appreciative of traditions. Not a womanizer, but a family man. And overall he appears to be a very good man.

“The middle class isn’t a number—it’s a set of values. Owning your home. Sending your kids to college. Being able to save and get ahead. Across the country, too many families are being left behind. The next president needs to understand what the current one doesn’t: In America, no matter where you start in life, there should be no limit to what you can achieve.”

Arguably Trump can never understand what Biden naturally can. Trump was never poor, or middle class. Biden was not handed over an empire. Trump was never outside of the elite and the halls of power. Biden worked hard to rise and rise from nothing.

When Trump speaks of the left behind, it’s probably whatever he imagines it to be. Biden, on the other hand, knows what it’s like to be left behind.

That knowledge is very important because the highest office does necessarily lead to some sort of seclusion from the ordinary people. Let them eat cake is the best example of how those that lead can sometime lose touch. If one never had that touch to begin with, beyond rhetoric, then sinking your base by stupid tweets can come naturally.

Well, at least there’s something in common, like clueless journalists having no clue why popular things are popular, but we’ll get back to that after going through some policies, like:

“We need to put an end to unnecessary occupational licensing requirements.”

Hallelujah. Break the guilds. And end the wars Biden, end all wars:

“Biden promised to ‘end the forever wars in Afghanistan and the Middle East’ and terminate U.S. involvement in the Yemen civil war.”

You better. Too many Americans have died already. Time to enjoy some of that sweet peace dividend.

“We must turbocharge our efforts to address climate change and ensure that every American has access to clean drinking water, clean air, and an environment free from pollutants.”

Few have taken the time to look into this whole climate change thing with less well placed to know if it is man made or not, but in some ways that’s irrelevant.

All, presumably even Donald Trump, would very much like to have clean air, clean water, no cancer causing breathable chemicals and preferably even taking out our men from coal mines and putting them up the roof to install or manage solar panels. For them, who get a far nicer job, as well as for us who get a nicer environment.

“We can secure our border and enforce our laws without tossing aside our values, our principles, and our humanity.”

“Despite Sanders’s Jewish heritage, and increasing willingness to discuss his family history on the campaign trail, Biden’s lead over Sanders is even larger within the Jewish community than it is overall, with the former veep polling at 47%, compared to 11% for the democratic socialist.”

That may be in part because Biden described the Charlottesville marchers as “baring the fangs of racism, chanting the same anti-Semitism bile heard across Europe in the 1930s,” before criticizing President Trump for claiming there were “very fine people” among the marchers.

It may also be because Israel is sort of going a bit too far to the right, with jews in America probably considering Biden as a more likely candidate to stand for liberalism everywhere, including in Israel, than Sanders.

That’s interesting because it suggests Biden reaches out to pretty much everyone, across many divides, and appears to be popular with independents.

Among Democratic candidates, he has a clear lead. Against Trump too, he has a huge lead:

“Former Vice President Joe Biden leads the president by 9 points among registered voters, 51 percent to 42 percent — outside of the poll’s margin of error of plus-minus 3.5 percentage points,” says NBC.

Among independents it’s a closer race, as you’d expect, with 45 percent for Biden to 41 percent for Trump.

Obviously there’s still plenty of time until the election and much can change. In addition, polls do lie, but it does look likely this will be a race between Biden and Trump as Biden does have the ability to appeal to a very diverse set of groups, including perhaps even this space.

Biden does not appear to have said much about bitcoin, but very interestingly, a PAC campaigning for him to run for the presidency in 2016 started accepting bitcoin donations back then.

“This is in keeping with Vice President Biden’s strong support of technology and innovation throughout his career,” Joseph Schweitzer, the group’s director, said in a statement back then.

He does speak of innovation, and of course there’s hardly anything much more innovative and new than bitcoin, blockchain, tokens and so on.

He is however quite old so it’s doubtful he himself has had time to wrap his head around this blockchain thing. It’s instead probably for his advisors to summarize it and give him a recommendation.

He could, for example, in reply to Trump’s bitcoin tweet, say something like yes there’s a need for regulations where money is involved, but bitcoin has fostered much innovation and we need to compete: build code not walls.

Then he can differentiate Libra as some corporate coin fully controlled by Facebook which has nothing to do with the global blockchain network as Facebook’s is a walled garden version.

Or he can say nothing. Or he can hail blockchain as a very innovative thing, with that then taken as a proxy expression of support for much of this space.

What he should do is a matter entirely for him and his advisors, but it is a test of sorts because it would be the first indication of what sort of presidency it would be.

By that we mean including whether he, and his advisors, are smart enough to see the opportunity Trump has created, an opportunity that includes the potential to steal many of his voters due to the stupidest tweet ever sent out.

The above is stupid not just because of what it says, but because it shows he is completely out of touch with his own base which by and large strongly supports cryptos.

That lack of good judgment, either by Trump himself or his advisors, has been repeated in many other areas. But here, the blunder is at such scale you do wonder what on earth is going on at the whitehouse.

Cryptos, of course, are neutral by design. They’re not left or right. There’s all sorts of cryptos. Inflationary, deflationary, digital gold, cash, more for money apps, more for securing documents and on and on.

It’s a technology, with it inspiring plenty of Americans and others across the world of potentially incrementally, gradually, and fully consensually, building a better monetary system that can secure the rise of the next Joe Biden who may currently be in high school.

Innovation is what has made America great and it is only through innovation that it can remain great and become even greater.

In that aspect, few other areas are more innovative than this space or more inspiring in creating an optimistic atmosphere that looks to the moon, the stars, and the advancement of man.

Biden has a unique opportunity to tap into all that, and so turn 4chan and many other spaces into blue memes of the boy who rose from nothing.