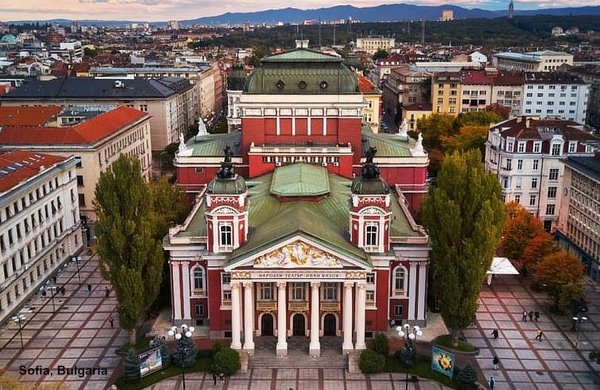 For the first time in history, the bitcoin holdings of a nation state have surpassed their gold reserves, and it happens to be Bulgaria.

The country is believed to hold more than 200,000 bitcoins, now worth about $2 billion, while their gold reserves of 40 tones are worth only $1.8 billion.

Making it the first time a nation state has more value stored in bitcoin than in gold reserves.

That’s per a May 2017 press release by the Southeast European Law Enforcement Centre (SELEC) which announced in a headline: “More than 200,000 bitcoins in value of 500 million USD found by the Bulgarian authorities.” They further said:

The organized criminal group consisted in Bulgarian nationals having connections in The former Yugoslav Republic of Macedonia, Hellenic Republic, Romania and Republic of Serbia.

The modus operandi used was recruiting corrupted Customs officers in all involved countries with the purpose to infiltrate a virus in the Customs’ computerized systems. Once the virus installed, from distance, the offenders were able to finalize various transports, as in the Customs’ system appeared that the cargo was already checked and passed.

The Bulgarian authorities have searched more than 100 addresses, suspects and vehicles. A large quantity of money was seized, as well as equipment, devices for communication, computers, tablets, bank documents, etc…

It was determined that the members of the organized crime group invested the money obtained from these illegal activities in bitcoins, around 200,000 being discovered in the virtual space.

As a reference, the value of one bitcoin is rating to 2354 USD. The offenders choose the bitcoin way of investing/saving the money, because it is rather difficult to be tracked and followed.”

They give no detail on how these bitcoins were discovered exactly, but they show pictures of seized cash, with the law enforcement agency further mentioning “equipment, devices for communication, computers, tablets” were seized.

Just what sort of devices or equipment is unclear, but reports came up with a very precise number of 213,519 bitcoins, worth at the time about half a billion dollars.

At the current price, these bitcoins are worth more than $2 billion. While where their gold reserves are concerned, Bulgaria currently has 40,400 kilos of gold, worth $1.8 billion.

That means Bulgaria’s bitcoin reserves are more valuable than their gold reserves in a world’s first, backing their paper money somewhat uniquely, but the government of Bulgaria appears to be a bit shy about it all.

Months after the above press release by the European law enforcement agency which said it worked with Bulgarian authorities, international crypto and other media outlets picked up the story.

At the peak of crypto prices in December 2017, Coindesk reported Bulgarian authorities had seized 200,000 bitcoin.

It appears Coindesk became aware of it after coming across a story by the award wining Bulgarian investigative paper, Bivol, which reported on a request for information regarding these 200,000 bitcoins in November 2017.

“The Prosecutor’s Office has not seized the bitcoin in the investigation of the cyber-attack against the Customs Agency in May. This is what the chief of the special prosecutor’s office Ivan Geshev said today.”

All of this became very interesting when Bivol showed their frustration with an April fools joke story that said the bitcoin were sold in secret to pay for new air force squadrons and the president would give an award to himself as well as other officials.

The very fine Bitcoinist then showcased their stupendous researching capabilities by citing the above April Fool’s story in a reply of sort to our own report.

What Happened in Bulgaria?

It has long been established that reality is way more exciting than any fiction any man or woman can imagine. So, what exactly happened is not very clear.

The press release by the European law enforcement agency has a very bold and a very unambiguous headline. It says in very clear terms Bulgarian authorities found more than 200,000 bitcoins.

That press release still stands and still says the same thing without any correction or clarification now many years on and even after getting much attention.

Presumably therefore they still stand by what they said. Meaning on balance the Bulgarian state does have these bitcoins unless they can show otherwise.

The statement by Bulgaria’s prosecutors office is of course very unsatisfactory because it does not clarify why the European law enforcement agency said and continues to say – by not making a correction – that these bitcoins were found.

A simple denial where it concerns a public blockchain is of course not quite how things work when it comes to bitcoin. That’s because for small amounts, bitcoin can be very private in that you can move 1 BTC and no one would reasonably be able to tell if you gave it to a different owner or otherwise.

Where it concerns huge amounts, you can’t quite easily move them because everyone can see you did so and everyone can establish, at least beyond reasonable doubt, whether they changed ownership – in which case why? – or otherwise.

Making bitcoin’s public ledger one of privacy for the people, and transparency for the rulers, the rich etc.

The latter is presumably why they’re not revealing the addresses with it somewhat unclear how this bitcoin was acquired by the sophisticated hackers.

The other quality of bitcoin is that you can track its movement from the beginning of crypto time. So if there’s any nefarious behavior – and Bulgaria is a fairly decent European country rising as a tech hub of sorts – then it may eventually be provable on the blockchain.

That’s because it leaves traces, forever, analyzable by anyone. So we doubt the elected there would loot what is in many ways the most globally transparent ledger when it comes to substantial amounts.

Instead it is probably the case that, as the Interior Ministry said, there are court cases, prosecutions, investigations and so on. Hence they, perhaps very rightly, are for now choosing to not speak about their biggest holdings in history.

However, until they satisfactorily clarify either why the European law enforcement agency said what it said, or show on the blockchain just what happened, logically we and everyone else will have to conclude the Bulgarian government has these coins and, in a world’s first, that these coins are worth more than their entire gold reserves of the nation state.