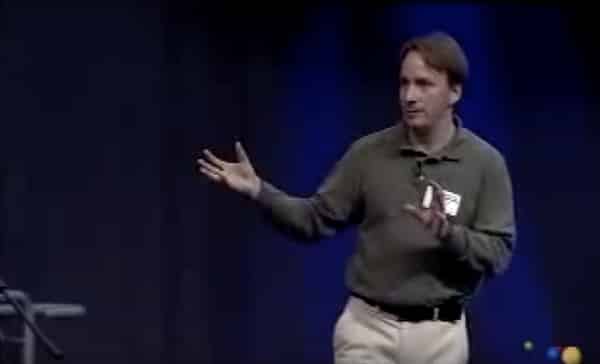 May 3rd 2007. As the first rumors of overextended lending in banking appeared on late night TV, a speech was being given that in many ways describes bitcoin, the breakthrough invention of decentralized digital cash.

Linus Torvalds, “the King of the Geeks,” “the godfather of the open-source movement,” “one of the revolutionary heroes of the past 60 years,” was presenting Git.

That being a system which can allow for decentralized collaboration and sharing of code through replicating file copies into all interested “computers” that get updated when the code changes.

A mutable blockchain can be one description of Git – a version control system that uses a structure similar to a Merkle tree.

“Let’s say there’s a humongous tree under Git, would it be possible to check part of the tree?” Someone asks.

Great question, says Torvalds, before explaining at length why you wouldn’t want a specific file, but the whole repository of files, how the former would have scalability problems, how Git is efficient, and on and on in a way that makes one think: is this where bitcoin began?

“Based on my own calculations from Tip4Commit’s publicly available tip data for the Linux project, Torvalds had earned at least .172 bitcoin,” said ITWorld all the way back in 2014.

That’s now worth a fair bit of about $2,000, but Torvalds happens to be very rich with his net worth estimated at about $150 million.

Part of that is due to shares he has in Red Hat Linux, apparently given to him as a thanks for creating the open source operating system that now runs much of the world.

A child of “campus radicals,” Torvalds belongs to a generation that came of age at the dawn of the invention of computers in the 70s and 80s.

Alongside now late Steve Jobs, as well as Bill Gates and others like Richard Stallman, Torvalds can be thanked or indeed blamed for everything that is right or indeed wrong with the current digital world wide web.

He is a towering figure in computer science, and with Jobs gone, he towers even further, but why the soon to be 50 years old has not uttered one word about bitcoin?

We asked him once by email, and of course received no response. Undoubtedly plenty have asked him too, but as it happens, Google appears to not have one quote about bitcoin by Torvalds.

In 2013 or 2014 when that article came out, it would have been understandable, but after 2017 this silence perhaps says a lot more than any word he can utter.

“By giving away his software, the Finnish programmer earned a place in history.

Linus Torvalds was just 21 when he changed the world. Working out of his family’s apartment in Helsinki in 1991, he wrote the kernel of a new computer operating system called Linux that he posted.

If anyone has the skills to put together what was arguably already invented technology and through it create a system that makes copying of digital files pretty much impossible, you would think it would be Torvalds.

That young man’s question about the single file may well have created a butterfly effect that, when those rumors of banking troubles began getting a bit louder, could have turned Torvalds’ attention – who as a wealthy man presumably had some financial exposure – to the question of digital money.

It is said Satoshi Nakamoto came up with the bitcoin idea in 2007 and once he saw how all the components could fit together, he could not stop thinking about it.

Some comments describing his code say it looked like someone trained in “old” code practices or languages. Some describing his temperament say he could at times be brash.

“If you don’t believe me or don’t get it, I don’t have time to try to convince you, sorry.” – is one quote that plenty of bitcoiners can say from memory.

It just fits, and all too perfectly. His sudden exit, with Nakamoto apparently saying he had moved onto other things barely a year after he launched bitcoin, fits too with a man that already had fame and name.

The untouched bitcoins. What on earth does he need them for? He may have well thrown them away. Why on earth not. Already enjoying his yellow houses, his yellow car, his presumably lovely life. Why in any way risk even a tiny bit of it.

“I think I was named equally for Linus the Peanuts cartoon character.”

As randomly came to our attention while trying to find an image for a recent article, Ash of Pikachu is apparently known as Satoshi in Japan.

Hints and hints that all fits and fits far too well, although of course one can’t discard wishful thinking.

Yet, as someone introduced to Stallman before many of us were even born, the legendary ability of Nakamoto to keep his privacy, for Torvalds could have actually been very easy.

“I am reminded of this every time I see a commit hash [on Git]: bdd5fd74686bdee484227eb42d21190618a59ce4. That looks very similar to a blockchain address! I know that it is just common SHA encryption, but always feels like an eery coincidence to me.”

Torvalds of course would perhaps deny, although his silence may well indicate that maybe he reserves the option to affirm.

His right, entirely, if he is indeed the genius. He may well not be, but if he is, then his exit from the bitcoin stage was probably some sort of accident of history due to the very busy task of maintaining Linux.

Bitcoin had taken a life of its own. It had attracted stubborn ideologues who… Torvalds would probably call stupid for standing up to the hornets nest rather than instead staying more outside of overt politics by focusing on tech.

They could no longer hear him. They would no longer listen. In the circumstances back then, and with a man like Torvalds who already had far more awards than he would care and world renown name and fame, leaving may well have been a very obvious choice.

By that, he created something that no one has before, nor since. A truly uncontrolled and uncontrollable piece of code that has no “rulers,” not even of the subjective sort like founders that still guide it.

“Any intelligent fool can make things bigger, more complex, and more violent. It takes a touch of genius — and a lot of courage to move in the opposite direction.”