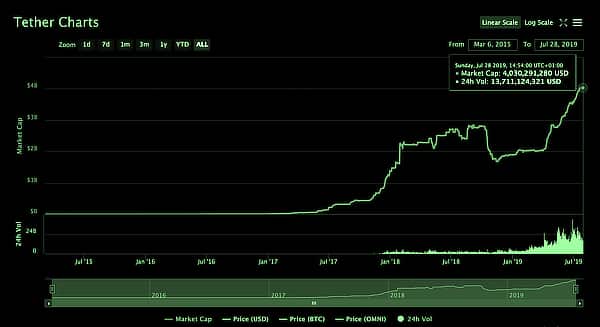 Tether’s market cap has suddenly risen to over $4 billion, the highest level since its launch in 2015.

The USD pegged token has jumped by more than $1 billion in just a few weeks, up from $2.8 billion on the 16th of May to now more than $4 billion.

Much of this increase in new issuance is due to a jump in ethereum based ERC-20 tokens recently.

There was barely half a billion USDT tokens issued on ethereum as early as June. Now, and fairly suddenly, there’s close to $1.5 billion.

In addition they appear to have allocated much of it, with just $21 million left to distribute, compared to the $260 million for the bitcoin based Omni tether.

Where this increase in demand has come from is not too clear, but crypto prices jumped in May and June.

About half a billion, however, was added in July when crypto prices have been sort of sidewaying or falling, with tether’s market cap (featured image) looking a bit vertical.

The token is used for quicker arbitrage as well as to bypass restrictions in China and is used by crypto only exchanges as a dollar replacement.

Tether’s trading volumes used to be far below bitcoin’s and at times even eth’s, but for some reason that has changed.

Why, is unclear, with one reasonable hypothesis perhaps being that tether is maybe the primary method used to fake volumes, wash trade and so on.

That’s because as it can be used on crypto only exchanges across the globe and as it’s a token, any random exchange – and there have been quite a few popping up last year and this year – can set bots to basically trade with themselves.

It can also be professionals with maybe even high frequency trading bots fakely exchanging USDT to confuse or fool the market or to get an edge in any potential front-running.

Volumes may also be inflated in arbitrage if bots are running around trying to grab even a penny above the cost of arbitraging.

On the other hand, as tether can be exchanged for any crypto rather than just for bitcoin, it shouldn’t perhaps be too surprising that their volumes are higher than bitcoin’s now that they’re established and integrated across the globe.

Bitcoin too, however, can be exchanged for other cryptos as well as for actual USD, euro, pounds, Korean money, and pretty much all global currencies.

So part of the demand for tether may well be coming from the competition between exchanges to be noticed and to be liquid.