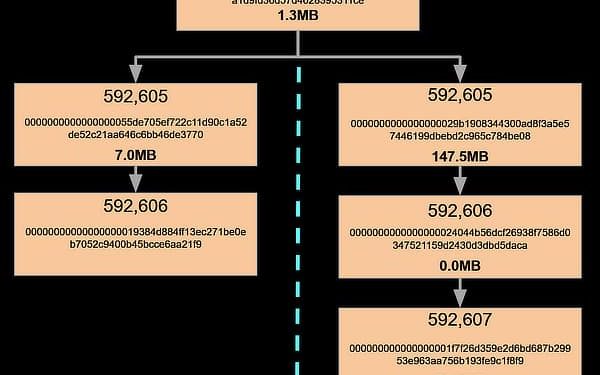 BSV, the chain-split of a chain-split has itself split into three chains following a ginormous 210 MB block this Saturday.

Coin Dance and other block explorers were stuck on that 210 MB block, including some miners who extended the “original” chain.

Bitmex research says 65% of BSV nodes are on the latest block. 17% have been stuck on the 210MB block while 19% have not even upgraded and are on the old pre-hardforked chain.

BSV “upgraded” this July 24th with the sole aim of changing the blocksize limit from 128 MB to 2 Gig.

The stated requirements to participate in this network for operating a “listener node” or a mining operation are, among other things, a “1Gbit+ Internet Connection (up and down).”

Ryan Charles of Money Button and a strong BSV supporter was unable to keep up, stating:

Running a node is expensive.

Our new instance will cost thousands of dollars per month to operate. As blocks continue to get larger and we have to upgrade the instance many times, this cost will balloon.

Since we do not earn money from transaction fees like miners, it will be too expensive for us to run a node.”

These ginormous blocks led to a considerable drop in the hashrate to about 300 petahashes before recovering to a current circa 1,200 PH/s.

Coin Dance is now on the new chain, with the older chain presumably to be discarded as it’s unlikely anyone would bother maintaining a BSV Classic chain.

That means whoever got stuck mining on the old chain may have lost some money as those blocks will now probably be discarded.

It also means what might have appeared as confirmed transactions could have become unconfirmed in a brief rollback of history.

The 210MB block has some 800,000 transactions for a fee of $350 worth of BSV with it taking quite a few operators some hours to verify.

Here the network is centralized with Coingeek directly or indirectly running the vast majority of miners assuming that grey “other” is them.

So this ginormous block in the end didn’t matter very much because Coingeek forced all others to follow them, unless obviously those others want to come up with a new client, but the wind might have sailed by then.

In a decentralized network, this would have gotten really messy and might have created a permanent split if miners did not voluntarily agree to throw away their blocks, with a lot of headache then in regards to just which one is BTC.

This ginormous block, moreover, has a significant attack vector in a decentralized network in that the block can be filled with hard to verify transactions, and so clog the network.

In a centralized blockchain, Coingeek in this case would just orphan that block, but other miners would have been stuck. Meaning Coingeek would take even more hash.

Much of this does not necessarily matter in BSV as there is no real economic activity, but in a blockchain that is actually used, it could have gotten messy.

Sometime in the future 210MB blocks might perhaps become manageable for a laptop node. In which case this would translate to about 120 million transactions a day.

The problem there would be storage because memory only increases in a blockchain. At the current 1MB for bitcoin, requirements would still grow to about 10 terabyte by around 2030.

Not huge perhaps and somewhat manageable even now, but it will continue to increase. Hence the very conservative approach in bitcoin where they’d rather network users pay the cost in transaction fees instead of node runners in resources for the network.

In BSV they take the opposite approach, while BCH has now become sort of the middle way in increasing capacity but kind of in line with demand rather than by jumping to 2GB when no one is using the network.

Will be interesting to see however in how many chains BSV splits if they try mining a giga-block.

We haven’t really seen a three way split before, but with gigablocks there may well be more than even three.