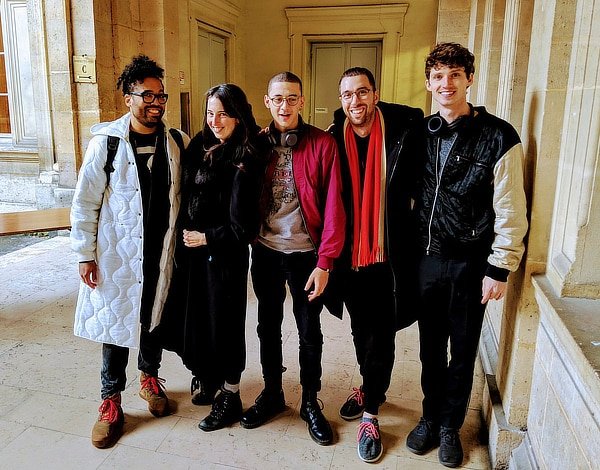 Lane Rettig (pictured, second from the right) an Ethereum developer working on eWASM, took the microphone to argue that ethereum’s Proof of Stake (PoS) is not permissionless because you have to receive the stake (eth) from someone else.

He also argued that it might not have been a good idea to distribute 70% of Ether’s total supply, at the time of the genesis block, to a select group of project founders and community members.

Rettig, an MBA graduate from the Wharton School of Business, asked his Twitter followers whether it was a wise decision to allocate such a large amount of ETH to those who were involved in Ethereum’s early stages of development.

Rettig: Ethereum Development Has “No Clear Shared Values or Mission”

Rettig’s comments appear to have come in response to Ethereum co-founder Vitalik Buterin’s recent statements on Twitter in which he welcomed more skeptics as development continues for Ethereum 2.0, a major system-wide upgrade aimed at improving the overall efficiency of the world’s largest smart contract platform.

According to Rettig, Ethereum’s transition from a proof-of-work (PoW)-based consensus algorithm to proof-of-stake (PoS) “isn’t truly permissionless,” which could make it vulnerable to collusion. He also believes PoS security is “circular” and that the process of sharding “breaks one of Ethereum’s main technical merits, easy composability.”

The founder of Crypto NYC, a blockchain-focused co-working community, believes Ethereum is suffering from “poor governance”, and that the digital asset’s ecosystem is still subject to “bad economics and wealth distribution problems.”

Does Any Crypto Project Have Fair Wealth Distribution?

Responding to Rettig’s criticism of Ethereum’s token distribution scheme, Buterin questioned whether any cryptocurrency project had done a good job of equally distributing resources among its community members.

“I’m speaking in relative terms, not absolute. In any case, given the atrocious wealth distribution at present, I don’t think Ethereum is socially scalable enough to achieve another 100x,” Rettig said.

Meanwhile, Eric Conner, founder of blockchain informational resource EthHub and product developer at Gnosis, argued that regardless of what happens, wealth always concentrates itself in the end. This is true even if everyone in the world received 1 Ether at the time of the genesis block, and even if Ether’s supply was capped, Conner said. He further noted:

“Unless you completely shut off the financial market side of the crypto (which renders it useless) it’s inevitable that this will occur over and over and over. It’s a game and some people are better at it.”

Notably, Rettig thinks Ethereum’s current wealth distribution is worse than any country in the world.

“Far Too Much Ether Was Pre-Mined”

Rettig also claims that “far too much was premined and presold relative to all the ether outstanding.” He adds that it took “far too much value off the table from day zero and serves as a giant ‘f**k you’ to everyone who comes along and tries to add value later. It’s been a huge turn off to me and many others.”

Anthony Donofrio (“Texture”), an Ethereum Founding Member, argued that Rettig doesn’t know what it was like to work hard during Ethereum’s early days when the platform was still considered a big experiment.

Jameson Hudson, one of the most active Ethereum community managers, had this to say:

However, it seems that Rettig can’t be persuaded to change his views about Ethereum’s ongoing development:

Just what exactly is going on here is not too easy to discern except that there appears to be some level of frustration, with this somewhat making its way to the surface.

Ethereum’s fall in value against bitcoin and the clear risk of it potentially becoming irrelevant during the two years period of the complex transition to sharding, may have lit some fire under devs feet.

The competition is fierce, especially from bitcoin, but potentially other projects too. So maybe they’re finally getting their house in order.

That’s however something we have been saying for months, with little changing. The level of communication remains… well pretty much non existent. Is Rettig, for example, still part of the Ethereum Foundation or not?

One shouldn’t discard marketing through controversy. What is being marketed you can probably guess as there aren’t too many projects that could make one think it’s an eth dev speaking, when it could be that dev is for eth as well as x, y, z, especially considering that things like eWASM can transcend any one project.

In that case, much of the above is a bit boring, reflecting more on whatever that other project might be. Yet one would like to think that maybe all this is a side-effect of their attempts to get their house in order.