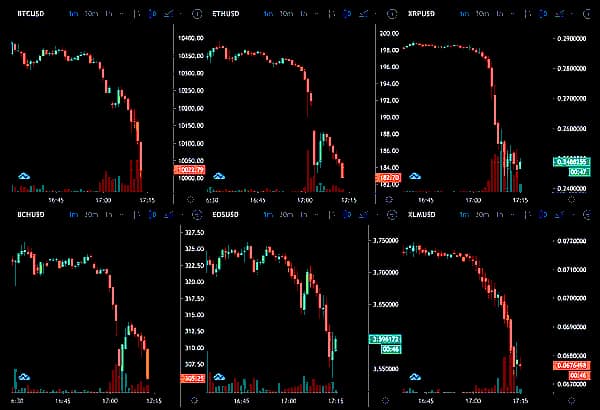 A bitcoin sell-off accelerated this Thursday to a low of $9,600 amidst a sell-off in stocks as well as gold.

The sell-off for a time appeared to be following Dow Jones pretty closely. That fell by some 3% yesterday as investors try and price-in the chances of a recession following an economic slowdown in UK and Germany.

Trump blamed the FED, but investors are probably more concerned about his “America against the world” policy with el presidente also blaming Germany. Trump said:

“Other countries say THANK YOU to clueless Jay Powell and the Federal Reserve. Germany, and many others, are playing the game! CRAZY INVERTED YIELD CURVE! We should easily be reaping big Rewards & Gains, but the Fed is holding us back,” emphasis his.

Germany has a shared monetary policy with much of the European continent through ECB. That he mentions Germany instead of ECB tells you all you need to know how much he would like a European wide response to America’s regulators fining Deutsche Bank to the ground while for their own banks they don’t even name them when they announce charges for insider trading.

This nationalist approach and this very unilateral view may have contributed to America leaving Hong Kong in the cold. The protests there and the unsatisfactory solution so far might have been one reason for Red Wednesday.

Trump’s response was to delay tariffs on China, sending Yuan briefly almost below 7 and sending the dollar index up.

This dollar move sent even gold briefly down in a mini-correction after it breached $1,500, with the moves in CNY and the dollar likewise contributing to bitcoin’s correction.

There’s some suggestions of some sort of ponzi in China contributing to this bitcoin move, but the ponzi perpetrators have been arrested and what crypto addresses are known show no movement of assets.

Apparently they were able to accumulate some 200,000 BTC and close to a million ETH. Since they’re now behind bars, presumably these funds will be returned to investors after probably many years and/or are lost. In the case of the latter, it would be cause for a price rise, not decline.

So it appears bitcoin’s recent move is mainly due to macro events with Brexit potentially being another one.

The conservative party has already broken out in what corporate media calls an outright civil war. The current Prime Minister basically accused the former chancellor, both of the same party, of collaborating with the EU.

As someone named Boris, he is hardly well placed to speak of collaborations, but a no deal exit, or even whether there will be an exit at all, is now back to being a question mark.

Corbyn is to table a vote of no confidence. Boris should have called a general election himself seeing as talks are not going anywhere, but one way or another, the polls will call again.

The electoral map as it stands is the most complex in decades if not for a century since Libdems fell from power. Will they rise again, is one question. Will there be an implicit silent pact with Labour is another. Will Boris in campaign mode charm, or will voters go by substance, is yet another question.

All this yo-yoing, in Britain and across the world, is probably what is making bitcoin yo-yo too.

Will America think again about Trump and his nationalism? Will Britain say we’re European afterall? Will China look at Hong Kong and say… well, freedom worked there so why not let them be free? Will China look at its own economy and say: why not open it?

Are they fed up with political poisonings in Russia? And Arabia, will they think of giving peace a try?

As a transition of power continues between baby boomers and rising millennials, change is on the air. The former look to the past, the latter look to hopefully 70 years or as much as the Queen herself of further living into the future.

The millennial generation now probably has the deciding vote, as well as the loudest microphone, the most spending power/need and the ear of both those above and below.

They are rising to shape the world in their own image, with all this yo-yoing probably best seen as a global clash between a declining generation and a rising new one.