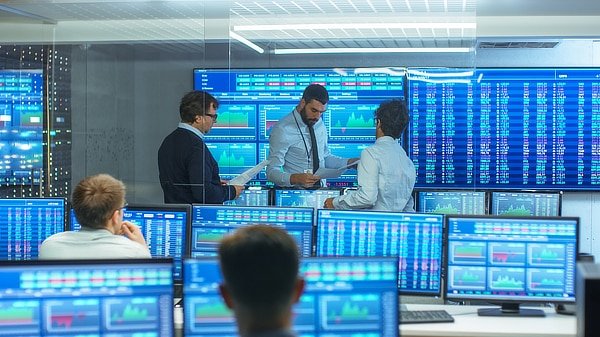 The market keeps developing the negative scenario, and the best option for now is a correction before a new decline.

For Bitcoin, a strong resistance area will be at the lower border of the Triangle pattern; until it is broken, no upward movement is to be expected.

On the other hand, Ethereum and EOS look rather attractive, trying to grow and execute the corresponding models on D1.

The important support levels are not broken yet, so price growth is still possible.

Litecoin and Bitcoin Cash continue declining in their reversal patterns that have been forming for a rather long time; however, the market has not yet decided on executing such unpleasant patterns.

The leading cryptocurrency has managed to escape the Triangle. However, the breakaway happened top-down instead of the expected bounce and the beginning of growth.

Currently, as the main scenario, we should expect an attempt to execute this pattern downwards.

The first aim of the price fall may be at the lower border of the ascending channel near $7,030; upon a breakaway of this level, the next support will form below $5,720.

Further descending is also confirmed by a bounce off the resistance line on RSI; as we may see, its values have broken through the level of 30, which indicates a strong bearish impulse.

As a rule, the indicator will show a rise only if it returns above 30. At the same time, an attempt of the quotations to correct, testing the broken border of the pattern, should not be excluded.

Only after that, the digital currency may resume the decline. The scenario may no longer be valid in the case of strong growth above $10,995, which will signal the return of strong buyers to the market and a potential reversal to an uptrend.

The technical analysis of smaller timeframes also points at the upcoming development of a correction to the resistance level of $9,190, where the lower border of the Triangle is situated.

Such a correction is also supported by a test of the support level on RSI; earlier we saw a bounce off these levels.

Most probably, the test of the resistance level will not cause a reversal, and we shall see further falling to $7,200.

The scenario may no longer be valid in case of strong growth above the upper border of the descending channel and securing above $9,800; in this case we should expect further growth. As for now, the digital asset remains under significant bearish pressure.

Ethereum’s price demonstrates significant decline. However, there is a high probability of a Bullish Wolfe Wave forming, which, in this case, will signify further growth to $280.60.

As we may see, the lower border of this model remains unbroken, which means the chances for a bounce and an upward movement preserve.

The rise may also be supported by another test of the ascending trendline on RSI. Earlier, we watched the quotations bounce off $171.00 to $225.00.

The positive scenario on D1 may be canceled by a serious decline below $125.00, in which case the aim of the decline may be around $75.00.

On H4, the quotations are also just testing the support area and the broken border of the Wedge. An attempt at growth from the current levels should also not be excluded.

Another signal confirming this movement will be a bounce off the support line on RSI. However, a so-called confirmation of the growth here may become a breakaway of the resistance level securing above $185.25.

The scenario may no longer be valid in the case of a strong decline below $145.00. Then further falling is to be expected.

As we see, the asset has bounced off the resistance line and is now testing support at $55.00. It is not excluded that we may see a correction to the broken border of the ascending channel and further decline aiming at $40.00.

However, the price structure with the middle at $80.00 potentially points at a decline to $21.85. The scenario may no longer be valid in the case of strong growth above $90.00, which will mean securing of the LTC/USD quotations above the upper border of the Ichimoku Cloud.

In this situation, the trend should make a reversal upwards with the first aim of the growth at $125.65. However, the pressure from sellers remains strong.

On H4, the quotations are stuck at the lower border of the descending channel. Buyers still manage to remain above it, and a correction to $65.00-$70.00 is highly probable.

The decline should continue from these levels. This variant is supported by a test of the broken trendline on RSI. However, if the bears manage to secure under the lower border of the channel, a strong signal for selling will be received, and the aim at $40.00-$20.00 may be reached very soon.

The scenario may be canceled if the upper border of the descending channel is broken through and Litecoin secures above $80.00, which will signify further growth with the first aim at $107.00.

On D1, EOS is moving in a similar way as Ethereum, forming an ascending Wolfe Wave. The quotations of the asset have already tested the lower border of the pattern, which means a potential bounce and the beginning of an upward movement.

An additional signal confirming such a movement is a test of the trendline on RSI. The aim of the growth and the realization of the ascending pattern is the area near $5.40.

The scenario may no longer be valid in the case of a decline below the support level and securing under $2.00.

On H4, the quotations are pushing off the support level. The lower border of the descending channel also lies here. As a short-term trading idea, we should expect an attempt of growth with the first aim at $4.30.

Another confirmation here is a strong decline on RSI. As we see above, earlier the price showed growth at the moment of testing this area.

The positive scenario may no longer be valid in case of a breakaway of $2.05, which will mean accelerated development of the bearish trend.

BCH, which was previously also forming a reverse Head and Shoulders pattern, has failed to keep moving upwards and is now demonstrating a serious decline.

In most cases, the prices may return to test the broken neck of the pattern and then continue developing the downtrend. The probable correction is also confirmed by a test of the trendline on RSI.

The next important support area is $177.05, a breakaway of which will mean a test of $100.65. The scenario may be canceled by strong growth above the upper border of the channel and securing above $355.95. In this case, the asset will have a chance of rising.

On H4 as well, there is strong pressure from sellers. The quotations have escaped the Triangle, and now we should expect a correction with a test of the resistance level at $245.00 — before a new wave of declining.

This movement is confirmed by a breakaway of the trendline on RSI, which will also act as a resistance line in the case of a return.

Needless to say, all statements and views expressed above and any forecasts contained herein are solely based on the author’s particular opinion.