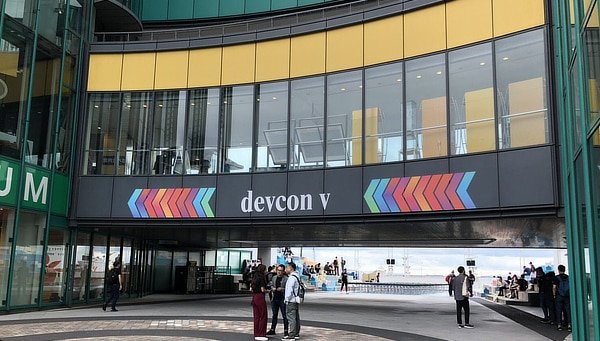 Vitalik Buterin is back to wearing his silly t-shirts, but no one cares anymore because the original dogecoin is in town.

Cheery and happy as always, Shiba posed for photos in front of a crowd of mainly coders, one of whom was overheard as saying: OMG the meme dog is real!

Justin Drake, who is usually more comfortable with cryptography and figuring out all the sharding stuff, could not hide his excitement at the appearance of the real doge.

In a packed small room, because Devcon has not quite really started yet as the big day is tomorrow, Vitalik Buterin looked on as everyone run off to see doge.

His facial expression seemed to betray a slight amount of jealousy at being out-celebed by Such Wow, the original.

After a few minutes, however, Buterin pretended nothing had happened and just went on to talk about bacon and stake, with someone else muttering something about talks with exchanges to provide eth2.0 bacon liquidity.

Suspecting all this was some sort of hint that dogecoin is where the show is at, someone went off to see if shiba was having bacon or stake or what was he doing.

Excited to finally meet the living legend, someone painted yahoooo on the wall outside a small room where people were talking about Web 3.0.

To continue celebrations, there was an ancient boat ride, some karaoke, and a long list of events both at devcon and around it.

This secret gathering somewhere in Japan took place earlier today in a massive conference hall where they have cut off the wi-fi so that nothing leaks.

The above pictures and videos, therefore, are the results of some brave undercover journalists who risked their lives to bring you the greatest jokes.

There’s apparently a secret plot to reveal these videos a week – or more likely a month – after the event once the media wagon has moved on.

The reason for this secrecy appears to be due to the crucial need to keep under wrap any detail surrounding the vital launch of ethereum 2.0.

We have therefore been unable to gather any new details so far, but there are rumors the deposit contract may have been finished.

Whether such advancement will be revealed at Devcon is unclear, but there are also suggestions of some secret tech stolen during the storming of area 51 earlier this year. All sorts of snarks and new technological layers. One of them can apparently do 250 transactions a second and with some more decoding could reach 2,000.

The Enterprise Ethereum Alliance (EEA) has also been spotted, with a cryptic message making its way out by EEA Executive Director Ron Resnick who said:

“2019 has been a year of growing market acceptance, and Devcon 5 is where attendees will experience how Ethereum – enabled by EEA member-driven standards — delivers real-world value through tokenized enterprise solutions.”

They’re to have the “first EEA Mainnet Initiative meeting” at Devcon in what sounds like a mini-pivot as they are seemingly to focus more on the ethereum blockchain itself.

Devcon is to continue until Friday with many sessions to be held across numerous rooms, but the doge show has now ended.

As have our silly jokes above, although some of it is real, like the EEA bit and the wi-fi and/or livestreaming bit, but obviously none of the doge, Vitalik, area 51 stuff except for the pictures and captions which have kindly been shared on Twitter.