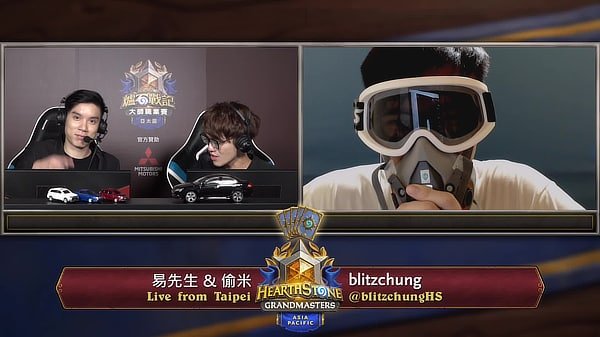 Gods Unchained, a blockchain based Hearthstone like game, saw its servers “hugged to death” as the game went viral after offering to pay all lost winnings of a top player who has been banned by Hearthstone’s owner, Blizzard, for saying during a livestreamed broadcast: “Liberate Hong Kong, revolution of our time.”

“While we stand by one’s right to express individual thoughts and opinions,” Blizzard said, “players and other participants that elect to participate in our esports competitions must abide by the official competition rules.”

That’s after Chung Ng Wai, known as Blitzchung, was immediately removed from the Grandmaster tournament and will receive no prize winnings. In adddition he was banned for 12 months from Hearthstone esports for “engaging” in an act that “in Blizzard’s sole discretion” brings into “public disrepute, offends a portion or group of the public or otherwise damages” Blizzard’s image, with it unclear just which one was breached.

The statement sparked outrage on social media where a tweet by Gods Unchained attracted 26,000 upvotes in just one post. They said:

“Blizzard just banned Blitzchung and stripped his Hearthstone winnings because they care about money more than freedom. We will pay for ALL his lost winnings and a ticket to our $500k tournament: no player should be punished for their beliefs. #freegaming

Today, Blizzard proved that centralized games companies will censor and exploit their players if it is in their immediate financial interest.

GodsUnchained, we have built uncensorable items with an open economy and market: even if we disagree with your views, we can’t take away your cards.”

Gods Unchained is a turn card game, like Hearthstone, but each card has a unique ID on the ethereum public blockchain.

The ethereum public blockchain is immutable, so they can’t change card ownership, nor can they deny anyone access to their cards, nor can they easily ban someone from playing the game.

This is designed to give the player greater control, and for a company to not have the power to easily censor someone for saying liberate Hong Kong.

We covered the game in depth last year, with it now in private beta, but following the tweet interest has spiked, with Gods Unchained stating:

“Servers have been hugged to death. We’ll get them up and running as soon as possible,” with them back on-line two hours later.

Looking at their smart contract address, we can see there have recently been a lot of transactions, with each card transferable to someone else if no longer wanted.

It’s unclear whether Blitzchung will take up the offer, but he said he does not regret saying liberate Hong Kong, adding “if we lose the movement, Hong Kong will end forever.”

In Hong Kong social media they have been calling it the revolution of our times at least since August, but this is the first time it is called a revolution in an international arena.

China’s response has been to call them secessionists, with People’s Daily stating “the territorial integrity of China is non-negotiable” in response to NBA standing for freedom of speech after Houston Rockets general manager Daryl Morey stated: “Fight for freedom, stand with Hong Kong.”

That led to an NBA broadcast taken off air in China in addition to all China based NBA partners cutting off relations. The Chinese giant Tencent has also stated they will be cutting ties with NBA.

Tencent owns 5% of Blizzard’s stocks, potentially giving them controlling say as other shareholders may be far more dispersed.

ESPN, which has a strategic partnership with Tencent, issued an internal memo urging hosts to avoid discussions of China and Hong Kong politics.

Meaning the fight for democracy in Hong Kong is now turning into a fight for freedom of speech in our own countries as China flexes its economic muscles and almost total control over its companies to enforce corporate censorship in America and Europe.

They can not censor the blockchain, however, which has been used by Chinese citizens to evade censorship.