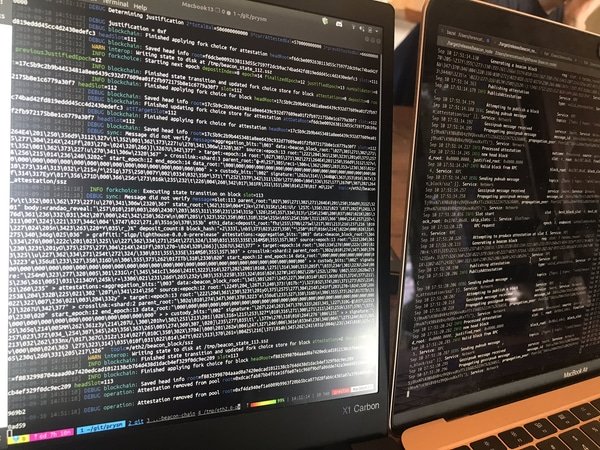 Ethereum 2.0 developers plan to begin the process of launching a testnet this week, Trustnodes is told.

“I just pinged other client teams and it seems they are just about ready with their ETH1 data functionality. We wrote up some documentation on our end so we will attempt cross client testnet in a complex environment this week.”

By Eth1 data he means the deposit contract with Danny Ryan saying in a public discussion “can writing junk for eth1data vote and be fine if < 50% of validators.”

The testnet is the final stage of launching the ethereum 2.0 genesis block in a Proof of Stake blockchain with a Beacon coordinator for sharding.

That’s known as phase 0, whereby eth is locked in the blockchain to validate in return for rewards of between 5%-8% to have stake in the network.

Phase 1 and 2 are now being simplified, which means they can go out quicker so it may well be late 2020 or more likely spring 2021.

While for the Beacon chain, three months of the public testnet would probably be the minimum, so the mainnet could launch end of January or sometime in the first quarter.

Once the public testnet is out then everyone can see how it works, especially for stakers who will want to check the behavior of their staking set-up.

That’s because as a testnet, this is all pretty much the “real” blockchain, but in lab conditions with stress testing to find bugs and where if the testnet eth is lost or burned it doesn’t matter.

All this to replace miners with stakers and more importantly to increase capacity through sharding which now sounds like it would be 64 x of current capacity.