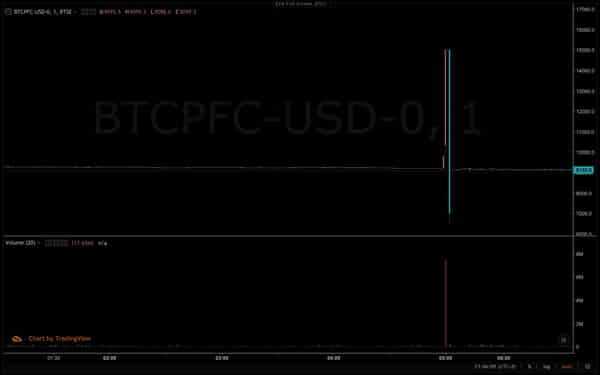 BTSE, a Dubai based crypto derivatives exchange saw bitcoin’s price briefly jump in about two minutes (pictured) from circa $9,000 to just above $15,000 on October 31st.

This was apparently because Coinbase Pro had some downtime at around 8PM London time on Halloween.

As a derivatives exchange, BTSE’s bitcoin futures price relies on spot exchanges like Coinbase. Thus the unexpected downtime seemingly caused some confusion, leading to the brief price of $15,000.

The price prediction says bitcoin would be at $16,000 in October, but $15,000 is so close many are taking it as satisfying the prediction because the glitch might have messed with the time machine at area 51.

We’re joking obviously, but nothing wrong with some fun except at Deribit where they’re not laughing because the glitch there caused a price fall of $2,000, leading to $1.3 million in losses. They say:

“We have reimbursed all affected accounts. A total of ~150 BTC has been reimbursed by Deribit.

The insurance fund will remain unaffected and all reimbursement will be paid by Deribit Company reserves.”

So next leg is now February, by which time bitcoin’s price should have tippled according to the prediction. Good luck with that one anon.