Debt is Growing Faster Than the Economy, Unsustainable Says Powell 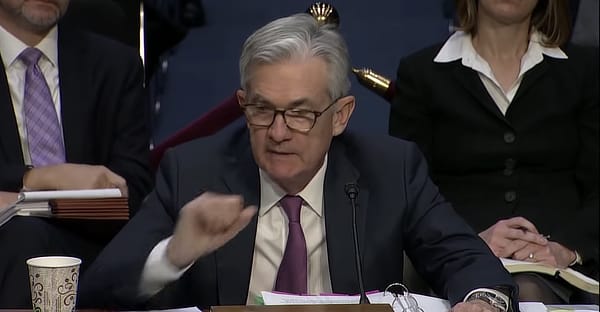 Jerome Powell, chairman of the Federal Reserve, has stated America is on an unsustainable path because debt is growing faster than the economy by a significant margin. He said:

It’s growing faster in the United States by a pretty significant margin. So even with lower rates and even with decent growth, there’s still going to be a need to reduce these deficits.

That’s a need over time. We’re not in the business of advising [congress] of when to do that or how to do it, but it is inevitable that overtime we will have to do it.

Frankly if we don’t do it, what happens is our children will wind up spending their tax dollars more on interest than the things they really need, like education, security, health.”

When Powell and our fathers could buy a house for $20,000 in the 90s, government debt was about five trillion, or just twice its income. Since then, it has increased close to five folds to $23 trillion.

We add the banking collapse to it and the borrowing accelerates considerably. So if we zoom in, we have a jump in 2016 due to tax cuts mainly for billionaires, and then another jump this year for unclear reasons except perhaps the need to pay more and more in interest.

In just three years the government has added to its debt level the entire amount of debt it had in the 90s. So with all this spending, you should expect a roaring economy.

The great 90s saw growth nearing 6%. There’s the dot com crash, but still the economy is growing and goes racing back to about 5%. Then the banking collapse sees a contraction and a structural change to growth levels which now in general are far lower.

This is only half the picture. The other half is inflation, as in just how much of this growth is artificial and merely due to more or less money circulating.

The great 90s had inflation at about 2%-3%. Meaning the economy was constantly growing in real terms by about 2% to 3% quarter after quarter, month after month.

Inflation now is again still at 2%-3%, but for Powell’s children that means there is no actual growth in real term except maybe 0.2% or pretty much just keeping on the edge of contracting in real terms.

This chart is interesting on many levels as there’s no difference to inflation regardless of whether Fed’s interest rate is at 6% or 2%.

That’s probably because fed doesn’t quite print money. They do, but the real money printing is by commercial banks.

In effect, fed is not quite making monetary policy. Commercial banks are. With this lack of difference in inflation presumably being due to demand and due to commercial banks being more or less lenient in their lending. Something fed is meant to orchestrate, but clearly they’re unable to do.

Why they comparing government debt to GDP is not clear because obviously it’s not the GDP that pays off the debt, it’s taxes, fines, licenses, or here government revenue.

Government revenue was $2.4 trillion. The debt is 10x more than its revenue. If this was a millennial trying to buy a home, the bank wouldn’t lend him or her any money, even though it is secured by an actual property, as they lend only 4x the income.

So the government is cheating while we can’t cheat, and it is cheating the millennials in particular because by the mid-20s, there won’t be any money left for anything other than the military, social security and interest payments.

Last time we looked at the data, from that $2.4 trillion, $1.1 trillion goes towards Social Security, Medicare and Medicaid. So old people in general, people like Powell.

Then $700 billion goes towards the military. That in general is young people, but not the sort that invent the internet or bitcoin, again in general.

Some $300 billion for last year went towards paying interest on the debt. That in general goes mainly towards commercial banks or very rich people who have so much money they don’t know where to put it, so they are happy to give it to the government for almost no return.

How much they’ve paid on interest this year is not clear, but it should have gone up quite a bit because the debt has increased significantly.

So only $300 billion goes towards everything else. Roads, airports, schools, government buildings, the vast civil service, and basically everything that is not health, military, or interest on debt.

Interest. Obviously the capital borrowed has to be repaid too, but where exactly they’ll find the money is not clear except maybe printing their way out in a stealth taxation manner.

The debt is currently growing at $1 trillion a year and is accelerating in growth. What is very curious is why is there no growth in real terms when a lot of spending is going on, whether through tax cuts or actual spending.

The answer presumably can’t be anything else than either incompetence or sophisticated corruption, with both being more realistic as the latter leads to the former.

The solution proposed by the rich like Powell would presumably be to cut spending. Use even less taxes on the things people pay taxes for so that the rich and commercial banks can be paid back this money they’ve printed out of nothing.

The actual solution is obviously reform, which means spend more to get the reforms implemented, paid for by progressive taxation so that a rich billionaire doesn’t pay the same tax rate as someone on $100,000 a year.

Same for properties. Same for companies, or capital gain etc. For the latter it is actually worse, a small business or some kid playing investment has the same tax rate as Google or as Bozos playing investment.

That taxation shouldn’t stop at $100,000 you’d think is obvious, but why does it? Well, because the rich make the laws through buying elections and their greed is endless.