Amid Upheavals Across the World, Bitcoin Still Falls 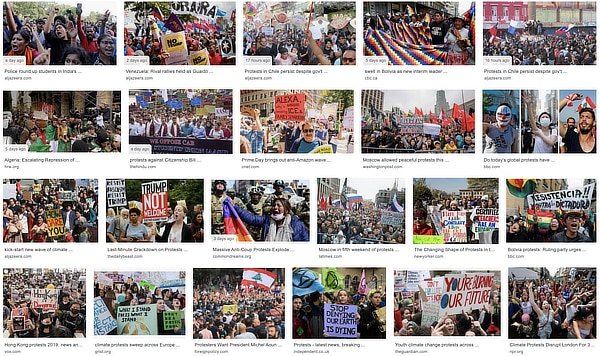 106 people have been killed in Iran according to Amnesty International in the past few days that have seen a bank being burned.

In Lebanon, they have shut down parliament. In Chile, there were rallies in major cities across the country on Monday. In Bolivia, the president had to flee in fear of his life. In Iraq, a library is becoming the symbol of the uprising there. In Hong Kong, the fiercest battle has been raging in the past two days. In France, they are on the streets again. In Britain, Extinction Rebellion has gone on hunger strike.

This is a world on revolt against a system that many perceive is largely rigged in favor of the rich, with the one idea coming out of it being a Citizens’ Assembly to increase accountability and representation in the west, while in other places the “mere” right to vote is their aim.

The system of governance is being questioned everywhere. Not just by pen, nor just by debate, but on the streets of many iconic cities.

The people are rising across the world to reject a global neocon authoritarian approach utilized in systems you’d think are as diverse as that of America and China. What will come of it remains to be seen, but as banks close or are burned, you’d think bitcoin would roar.

That’s still up nearly 3x since December, but the alternative to a potential monetary collapse so happens to not quite be able to handle a potential influx from it.

The leading cryptocurrency, and the second one ethereum, have both been artificially limited in capacity, and thus have been made useless for commerce at scale.

So bitcoin is now more of a luxury, rather than a useful tool. Something for the rich to park their money or to take savings out of the country or to make big international payments.

When it comes to replacing banks, well that battle was lost for bitcoin to some extent following a fierce “debate” in 2015-2016 that led to Bitcoin Cash.

Bitcoin Cash has plenty of capacity, but lacks the 8 years of awareness which bitcoin gained prior to BCH in 2017, and lacks the size as well as the global reach of the bitcoin network.

So at a time when bitcoin should be roaring like never, when “missionaries” should be there on the ground telling people and merchants they don’t need banks, bitcoiners instead are fiddling with their fingers.

Ethereans, once the banner bearers, have now gone off to hypothesize about universes, or whether it is streets with shared busses, or some committee for some signature.

While Bitcoin Cashers, who keep dreaming about this peer to peer commerce, in action seem to care about nothing else but poking bitcoin.

Why bother getting out there to preach the gospel when you can argue with your friend about who is right for that is far more fun and requires far less effort.

Nor is this wilderness limited to crypto only. The entire digerati class are on the edge of losing their reason detra. Money, which they railed against, is now the very trap they have fallen into in a worship of not ideals or principles but artificial and manipulated abstract units of account.

Thus bitcoin falls. Why should it not, when it comes not to assistance and acts instead like stocks, which too are falling.

And so they rise. Why should they not, when our efforts have largely failed to provide the alternative that was and remains necessary to escape total control.

“You will not find a solution to political problems in cryptography.

Yes, but we can win a major battle in the arms race and gain a new territory of freedom for several years.” – Satoshi Nakamoto

A very brief poem, for the occasion. Our muses compel, and of course it is just for your pleasure: