US Government Arrests a Blockchain Expert For the First Time 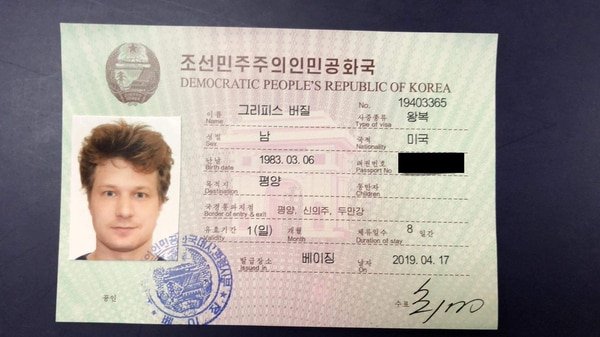 The United States government has announced a researcher at the Ethereum Foundation has been arrested ostensibly for delivering “a presentation and technical advice on using cryptocurrency and blockchain technology to evade sanctions” against North Korea.

They say Virgil Griffith delivered a presentation in North Korea titled “Blockchain and Peace,” with Brandon Cavanaugh, a special agent with FBI, further claiming Griffith discussed how blockchain and crypto can be used by North Korea for money laundering and to evade sanctions.

Cavanaugh further claims Griffith began formulating plans to facilitate the exchange of crypto between North and South Korea with the US government claiming the movement of eth or bitcoin in and out of North Korea is contrary to sanctions.

FBI Assistant Director-in-Charge William Sweeney said Griffith knew “what he was doing was against the law” and that it’s “egregious that a U.S. citizen allegedly chose to aid our adversary.”

Griffith publicly tweeted about going to North Korea with it unclear whether the conference in question was recorded.

Nor is it clear what the outcome will now be. There’s free speech grounds to be argued presuming Griffith presented what is already public knowledge.

The only specific topic mentioned by Cavanaugh, for example, is a discussion on Proof of Work vs Proof of Stake, which is hardly a divulgement of state secrets as they make it sound.

He apparently also spoke about smart contracts, with the general impression from this testimony being that he presented on what is very public knowledge.

They do not provide much detail about facilitating the exchange of crypto between North and South Korea. Specifically whether that’s just sending eth or bitcoin, or whether that’s creating an actual crypto exchange.

It sounds more like the former, in which case if Griffith had bitcoin or eth with him while in North Korea and sent it to someone outside of North Korea, then by the letter of the law apparently he is guilty of evading sanctions.

You’d think they’re speaking more of setting up a pipeline of sorts, but clearly they’re trying to make an example out of him to basically say: US law on sanctions applies to global cryptos too.

North Korea, as the cartoonized villains that they are portrayed, makes a soft target for this example setting, but it is probable they have more in mind other countries like Iran, or Venezuela, or even Russia.

That raises considerable questions in regards to scientific collaboration and in regards to the politikization of science and technology.

It also raises constitutional questions in regards to where do sanctions end and where does free speech start in regards to the conference presentation.

For ethereum specifically there are perhaps more immediate questions. Griffith played a key role at the Ethereum Foundation (EF) and likely has intimate knowledge of its workings.

EF compartmentalizes and sort of firewalls different parts, but for the US government to land this considerable “asset” is a significant development.

Whether these are trumped up charges is for the court to say. Certain individuals are not named, so necessarily there would be speculation on entrapment, with why Griffith being a very important question.

Just as whether the court will actually have any role is an important question too. If Griffith is threatened with twenty years in prison, but perhaps waved under some “deal,” then it might not even make it to court save for rubber stamping.

What that deal would be and whether Griffith would take it remains to be seen, but you’d think the US government wouldn’t want to waste such talent in prison.