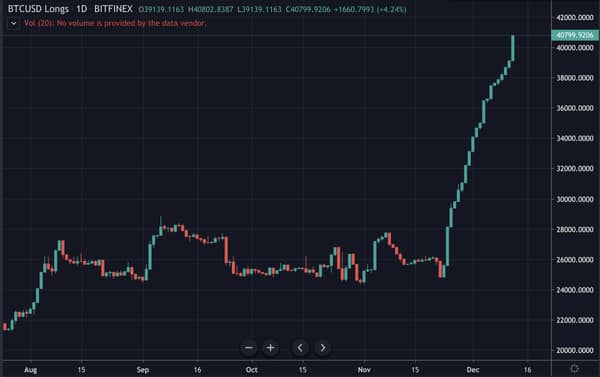 That has sent bitcoin longs to their highest ever, above March 2018 or February 2019.

Price hasn’t moved much while this $110 million worth of bitcoin was bought, with a comparison revealing something interesting.

The first time longs reached all time high since the above records began, back in March 2018, price reached a local low, with it then rising before continuing the bear market.

The second time in February 2019 is even more interesting. That was during the flat movement that created the massive cup and handle.

All time high for longs was on the last red candle before the big green one in April and then the bull run that followed.

So does someone know something? Maybe. Shorts are near all time low at just 6,000 bitcoins, worth $42 million.

For ethereum longs are pretty high too, but at April levels so not quite all time high, with shorts near all time low there as well.

CME and the rest look ordinary, so, one can speculate maybe the UK election results, but it might be more probable this is someone or perhaps the market betting the local bottom is in.

Whether they’re right remains to be seen, but traders are keeping an eye as this might be a potential indicator.