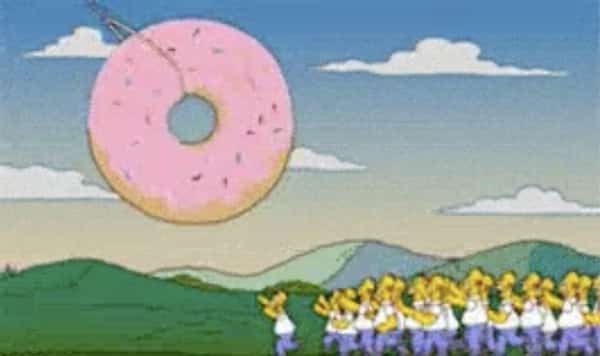 The latest form of modern art meets the latest technology in a unique experiment that mixes social networking with blockchain with money and with memes, as well as automated smart contracts that make all this fun possible.

“Special Membership is an on-chain subscription, paid for in advance, in 30-day increments by burning 5000 donuts. You will find this subscription interface in the side panel of r/EthTrader in the Reddit redesign,” says Carl Larson, an ethereum dev and top mod of ethtrader. He further adds:

“Having an EthTrader Special Membership unlocks unique features within Reddit. – Your name will stand out – You can choose and display badges next to your name. – You will be able post gifs within comments – You will be showing support for the EthTrader community…

If you’re doing one of those ‘wtf did he just say,’ lets look at a transaction Larson himself revealed:

There’s a lot of things going on here. First, we now know Larson’s address. Currently he has 3 eth and $2,500 worth of tokens in this address.

That’s relevant not just because of innate curiosity, but also because now Reddit knows what’s your eth address if you have connected it through the ethtrader sidebar on the new reddit design.

Thankfully this is through MetaMask, which as a hot wallet browser extension is by definition insecure. Therefore, only small amounts should be kept there.

Larson is keeping fairly big amounts, we’d suggest no more than $100 worth or an amount that if you lost it you would not care nearly not at all.

It is further just a reddit nickname that is associated with your eth address, but you’re on clear net, with your IP potentially visible to reddit and so on. So there is a privacy element that should be borne in mind.

The above is the frontend interface which is super smooth. We had to go through the whole thing, including adding MetaMask to a new browser.

It’s all spotless really, not one criticism. The interface itself sends you to the MetaMask extension, you just click to add it. MetaMask’s process is smooth too, although maybe not for someone unfamiliar as you have to figure out what a seed is and why you should save it, but that part is necessary. Nothing you can do about it.

So we end up at the above screen. We too busy reporting to have any donuts, but we could have bought some if we wanted to, with their market cap at $30,000 last time we checked.

However, we assumed this would just interact with MetaMask on the front end. After clicking purchase you’d think MetaMask would ask to confirm, and so we get the blockchain transaction which is what we are most interested in.

Here is Larson’s transaction again. The second important part of this transaction is of course the contract. That’s what is receiving this eth donuts.

The contract takes the tokens and sends them to the burner address, in this case that being 30,000 donuts.

These donuts have now vanished in as far as no one can access them anymore, so total supply has been reduced. Meaning if demand remains the same, then donuts should be a bit more expensive now.

Yes, this is real money folks, with economics and all of that. And unlike many tokens, these ones actually have a utility cuz gifs.

Also you can buy the banner at the top of the sub so we might have to get on with shitposting to get sum donuts for a twastnodes totally not an ad banner.

Where real real money is concerned, however, all of this has costed Larson only 7 cent worth of eth. Everything else was for hard labour in shitposting trenches for free.

As an aside, this could actually be a way for teens to get some eth who otherwise might find it quite difficult because of KYC and all that, with ethtrader the only place so far doing all this tokenized memes stuff.

So to finish the process off, Reddit keeps an eye on the smart contracts and sees who sent what for how much and accordingly gives them the membership by presumably using some json parser to have the centralized database read the decentralized smart contract.

As an aside, we haven’t actually checked how decentralized this smart contract is in regards to whether it has any backdoors fail safe mechanisms that allow the owner to do whatever he wants if hacked or if something goes wrong.

That’s probably not a first, but at the Reddit scale, it is. It is also pretty unique and a development that has gone way underground but deservers far more attention than it has received.

Unlike Facebook, which has regulators at their throat, Reddit has sort of with a joke kind of done what Facebook probably wanted to do but with eth instead of launching a new blockchain, and with silly karma points which magically become money, instead of scary fiat backed reserves that have politicians fear Zuck might want to control the world.

The joke obviously has SEC laughing too, if they’re even aware of what’s going on. Haha meme gifs muneh, stoopid kids having fun, nufin to do with us.

Well, one can easily see how this can be a fundraising method with a few modifications, but in this case there is clear utility, and it is an already built product, instead of a promise of 18 months, two weeks, building something.

The utility aspect is quite interesting because there’s the direct right to have gifs, and the indirect rewarding of content producing reddit users in a revenue/profit sharing scheme of sorts where the modern producers actually get something for their not-work.

There used to be someone for example who would post a haiku every day for these donuts. That being a good example of how even silly things like tokenized karma can still nonetheless potentially incentivize quality content.

Obviously the sums involved are small, you can’t live off it unless in a very poor country in which case if you can produce such quality content presumably you’d have far better opportunities.

Yet that little kick might still make a difference between bothering to do something or not bothering, with that something being something you would have done already.

Forth, these donuts can also potentially turn subreddits from dictatorship to democracy, something desperately needed not just more immediately in regards to having fairer sub governance, but also more widely in teaching all just what democracy is.

Currently, whoever is top mod can do whatever they want, as was shown by Theymos of r/bitcoin. That had direct effects on this space, but also more indirectly people were being introduced to dictatorship and how it works and that might have had wider effects in teaching people how power can be abused.

If instead there have to be elections for top mod and perhaps they are automatically appointed or removed through smart contracts, then this generation and those that come may well learn just how elections work and thus hopefully perform better in the real elections because it is afterall through play that we learn.

That is the most interesting part of donuts, with this aspect of the experiment not yet out, but it has been promised in two weeks.

One negative here is that the Reddit part largely remains centralized so they could if they want award whoever a billion karma, but everyone will be able to see on the blockchain someone got a “fake” amount of donuts.

The unknown is just how all this will really work in practice where social incentives are concerned.

That’s the experiment, and while naturally you’d expect some negatives to arise as no man made tool can be perfect, you’d think overall it would be an improvement over current Reddit. Just how much of an improvement, remains to be seen.