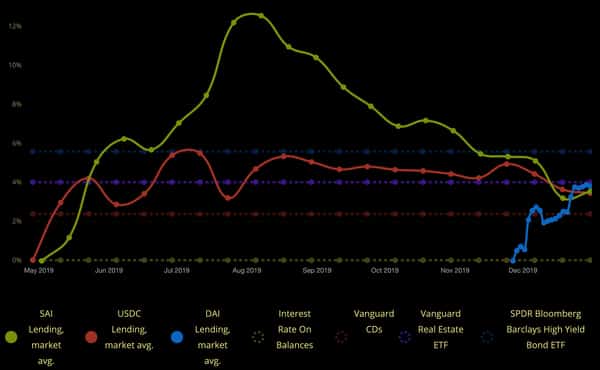 We are being fleeced by the vampire squids on Wall Street, but perhaps not for much longer if the new world of blockchain based codable finance has any say.

An event that has gone a bit unnoticed can potentially be a game changer of sorts. Thats the launch of the Dai Savings Rate (DSR) which now provides you 4% yearly interest on tokenized dollars for doing little more than sending it to the smart contract through Oasis or some other method.

Some $28 million DAI is already earning interest with this being what banks would call an instant access savings account.

That’s because you can withdraw the dai from the savings account whenever you want, and as soon as you do, the code automatically calculates how much interest you earned and so pays it to your ethereum address.

Banks kind of do the same thing, albeit far more manually, but for the privilege of using your money, the biggest bank in UK – Barclays – gives you a meagre 0.25%, and even for $10 million it still gives you just 0.30%.

To borrow at the same kind of instant access level, like through a credit card, Barclays charges as much as 20%.

It appears however almost none of it is passed on to savers, with this in effect being a sort of sophisticated theft.

MakerDAO uses sort of the same system of passing revenue from borrowers to savers, but does so far more equitably.

As you might know DAI is natively tokenized dollars whereby open source code “prints” dais based on locked eth with the price of eth incorporated through oracle feeds.

For the privilege of this “printing,” a fee of 4% is paid to the dapp which converts it to MKR tokens that are burned.

According to Daistats, there are some 10,000 MKR in burner, worth $4 million.

Some of this “printing” fee however, known as stability fee as its intention is to keep DAI pegged to the dollar, now goes to the savers.

The process is somewhat manual for now in as far as the setting of the stability fee and savings rate is concerned, but Compound does automate it so logically you’d expect eventually the dollar peg to be kept algorithmically through the automatic movement of the borrowing and savings rate based on demand and supply.

In effect making this an automated bank that basically runs by itself, and since the cost is just dirt cheap code, the rewards are shared with participants rather than galloped by vampire squids.

Hence DAI gives a savings rate that competes with even the Vanguard Real Estate ETF, while bank based savings accounts give absolutely nothing.

Meaning the tech revolution has now began swinging as years of work start chipping and chipping at the new world.